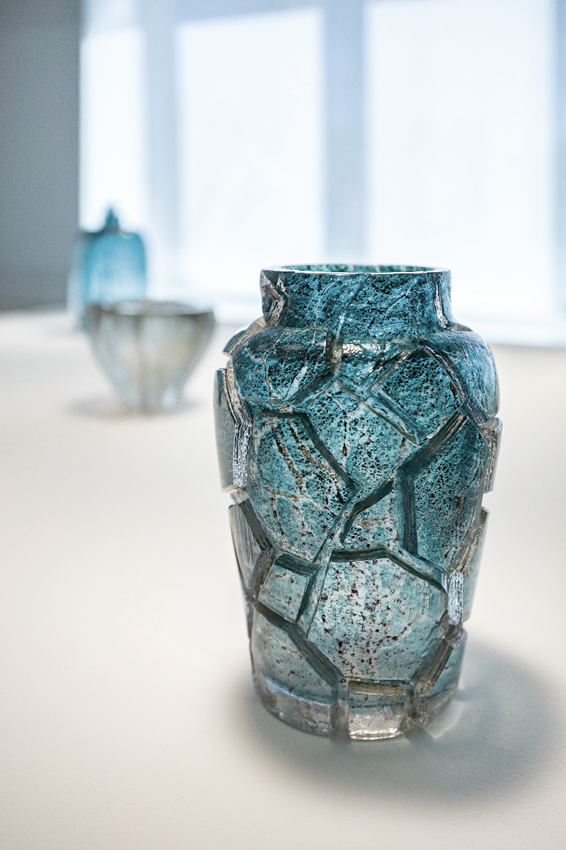 Light is the key to discovering Venice. In the year of the Biennale, contemporary art is the protagonist.
A thin common thread marks the time of the visits on the map full of events.
A bit tourists, a bit collectors, we land on the island of San Giorgio, ready to visit the “Rooms of Glass” at the Cini Foundation with the monographic exhibition dedicated to the very refined collection of glass made between 1911 and 1934 by the French master Maurice Marinot, curated by Jean-Luc Olivié, chief curator of the Musée des Arts décoratifs in Paris, and by the expert Cristina Beltrami. It is an extraordinary collection with 220 unique pieces with cups, vases, bottles and caps that tell the story of contemporary glass and the consecration from 1914 of an “authentic French style, far from the Bohemian examples as from those of Venice and Germany or from the pastiche de la Renaissance”. Beltrami explains by quoting an article of the time written by the critic Léandre Vaillat.

In just over twenty years, Marinot produced over 2,500 glass works in his house in the town of Troyes – the equivalent of Giorgio Morandi’s residence on Via Fondazza in Bologna – but above all, he managed to change style at least four times and become a reformer of the blowing technique and an expert in hot moulding. First of all, there was the enamelled glass that winks at the Renaissance style. The master then specialised in two cold working techniques: acid incision and wheel cutting. The result is vases with a new aesthetic,” explains Olivié, “focused on heaviness, thickness and plumpness”. It is the exact opposite of the lightness typical of the acclaimed Venetian glass. Marinot plays with colour and transparency and makes the golden bubbles often formed by glass a plus rather than a mistake. They call it the “caviar of glass” to highlight its preciousness. Right after the Great War, the master glassmaker charmed international collectors, first the New York banker Cecil Blumenthal, then Margherita Sarfatti, up to Mary Churchill, daughter of the great statesman, who bought a precious bottle of 1929 when French glass landed in London. Prices go up. In the 1930s, Marinot’s relations with Italy intensified, and the artist was considered a source of inspiration for designers such as Ercole Barovie. His experiments in fusionless hot colouring in the Crepuscolo series (1935-1936) influenced the Murano school in Venice. The real turning point on the Italian market coincides with the double participation in 1932 and then in 1934 in the Venice Pavilion of the Biennale, which “is considered the space to welcome the best European glassmakers,” says Beltrami. The real success will be obtained in the second edition where a group of pieces made in 1933 with hot technique are exhibited. They represent at best the opulence of the material. In Italy, the master from beyond the Alps is considered too expensive. The Biennale will be able to negotiate a square cup with a considerable discount (from 5,400 to 4,500 francs at the time) for the Museum of Murano Glass.
1934 was the last year of production for the Maitre terrier of Troyes. It coincided and most probably depended on the closure of the glasshouse in Bar-sur-Seinen.

The trip to Venice during the Biennale continues with a visit to the two museums of Francois Pinault overlooking the Grand Canal, almost one in front of the other, that exhibit and re-propose until January 6, 2020 the artists collected by the French magnate. At Punta della Dogana, the eclectic collective exhibition “Luogo e segni” (Place and Signs), curated by Mouna Mekouar and Martin Bethenod, director of Palazzo Grassi, will bring together 36 artists and a hundred works The extraordinary video “1395 days without red”, by Albanian artist Anri Sala, focusses on the themes of existence and more precisely on one of the days of the siege of Sarajevo. One not to be missed.

The undisputed protagonist at Palazzo Grassi is Luc Tuymans, Flemish painter born in 1958 with the exhibition “La Pelle”, curated by Caroline Bourgeois. The title is a quotation from the novel by Curzio Malaparte.
The rooms of the Museum house about eighty paintings and a gigantic marble mosaic executed site specific according to the artist’s project. The path is a temporal mix without being a monographic exhibition. Strong brushstrokes, often washed colours ranging from beige to grey that explode in Baroque memories and find Goya’s intense backgrounds. The cuts are cinematic as in one of his rare self-portraits. “He is inspired by existing images but his approach is never one of perfect representation,” Bourgeois urges. The light infuses serenity into the works of an artist deep and complicated like Venice.