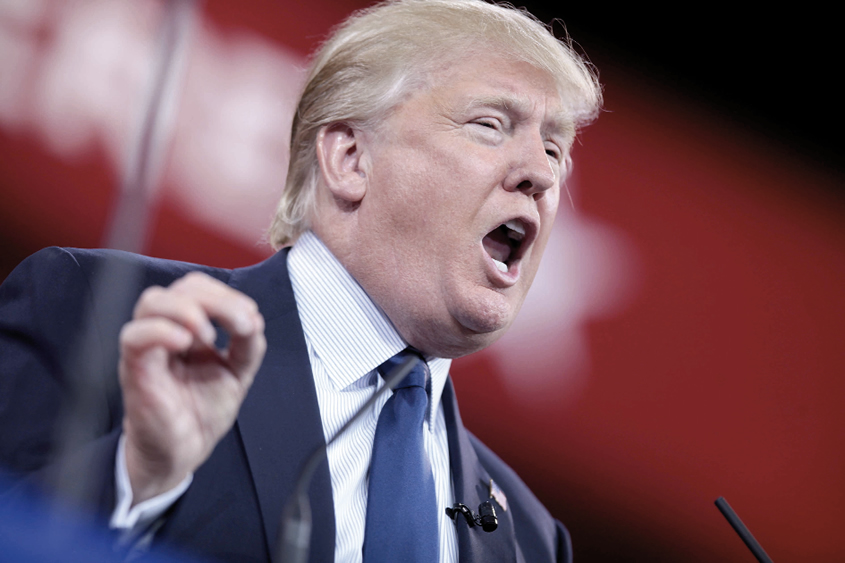 It is indeed true that Asia is increasingly more important in the financial and art markets. It is however also true that Europe – although beset by thousands of contradictions – is experiencing the sort of positive period that has not been seen for some time. Nevertheless, it cannot be denied that it is the United States of America that are taking the lead in all financial markets the world over. It would be unthinkable that with the USA in any degree of difficulty the rest of the world would be able to expand and that a sector such as the art sector – directly connected to the world of finance – would be able to grow if the American markets were to fall. However, at the present time, it is not the easiest of tasks to attempt to decipher the performance of the United States. The opinions of the managers of Wall Street are all different one from another. Let us take a look at the fundamental positive and negative elements.

The Trump Administration
The current President of the United States was bringing his election campaign to a close just under a year ago in the midst of a total mood of skepticism throughout the country. Indeed, those shouting the loudest criticism actually hailed from the financial milieu. The nicest thing being forecast was a collapse of total equity. But, anyway, Hilary Clinton was going to win, wasn’t she?
When the first results rolled in the scenario of immediate collapse looked like it was setting itself in motion, yet in just a few hours one of the history of finance’s most resounding about-turns started to take shape. Financial operators suddenly discovered that the new president’s programme was by and large favourable to the world of business. A general lowering of taxes, a return of capital to the country, investments for at least a trillion dollars in infrastructures, wild spates of de-regulation in the market were music to the ears of small and large companies.
Almost a year later, it might now be said that an enormous sense of disappointment has replaced that earlier optimism. Nothing has come of the initial promises made and the Administration is giving the impression to be struggling to quite a considerable degree. At a real level, the GDP will find it difficult this year to show an increase of over 2% and, what’s more, the FED is increasing the programme of tax increases.

The share market
So what’s actually happening in this climate of general disappointment? S&P’s 500, the main American and world stocks and shares index is continuing to produce new records. At the beginning of October it stood at 2,534, the umpteenth highest record, after having broken through the 2,500 barrier – a considerable psychological barrier – a fortnight ago. Although it is true that earnings in the third trimester are a little disappointing it is also true that the Central Bank is attempting to contrast shares. The market, though, is still growing.

The bond market
With the Federal Reserve that is increasing rates, inflation growing (+1.7% on a yearly basis) and a share market that is chugging along like a train it would be logical to expect a rise in interest rates. But no: after having exceeded 2.6% return at the beginning of Spring, the American Treasury had got up to approximately 2.3% by the beginning of October. In practice, it would appear that investors trust the American state and are continuing to pour their capital into bonds.

The dollar
In some ways this has been the real surprise. Everybody expected a strengthening of the US currency whilst over the last few months there has been a clear drop on the euro and most other major currencies.

What’s to be done?
At this particular point in time, how should someone who wants to invest in art – perhaps intending to purchase a work in an auction in New York – make his or her first moves? Should they still believe that the markets are creating the umpteenth speculative bubble and that everything’s going to fall down around them or simply trust in the fact that America is still America? No one has a safe answer and even the financial world is deeply divided on this. Many money managers claim that they are reducing investments on Wall Street, but yet the Stock Exchange is still growing, thus demonstrating the fact that those capitals coming into the country are certainly greater than those leaving it.
However, one observation can be made. Inside a complex structure like the USA political elements are certainly important, but not fundamental. The country can boast the most important companies in the world, an unequalled level of technology and research, consumption that is still positioned at an extremely high level, investments that have started to rise again, the presence of a multitude of sectors that permit a whole host of business formats and financial markets that are attracting capital from the whole world over. Against this backdrop, one individual man, even if he is the President of the USA, does not actually possess all the power necessary to create a sequence of disasters and the whole entity that is the American economy is most probably able to continue developing despite this individual man.
If this turns out to be true, it is possible that we might soon encounter a certain re-tracing of current directions. A real crisis would appear improbable however. With all the caution possible and all types of warnings to be made, maybe making a purchase at an auction in New York might not be such a rash move, especially if the purchase does not concern speculative works of art.