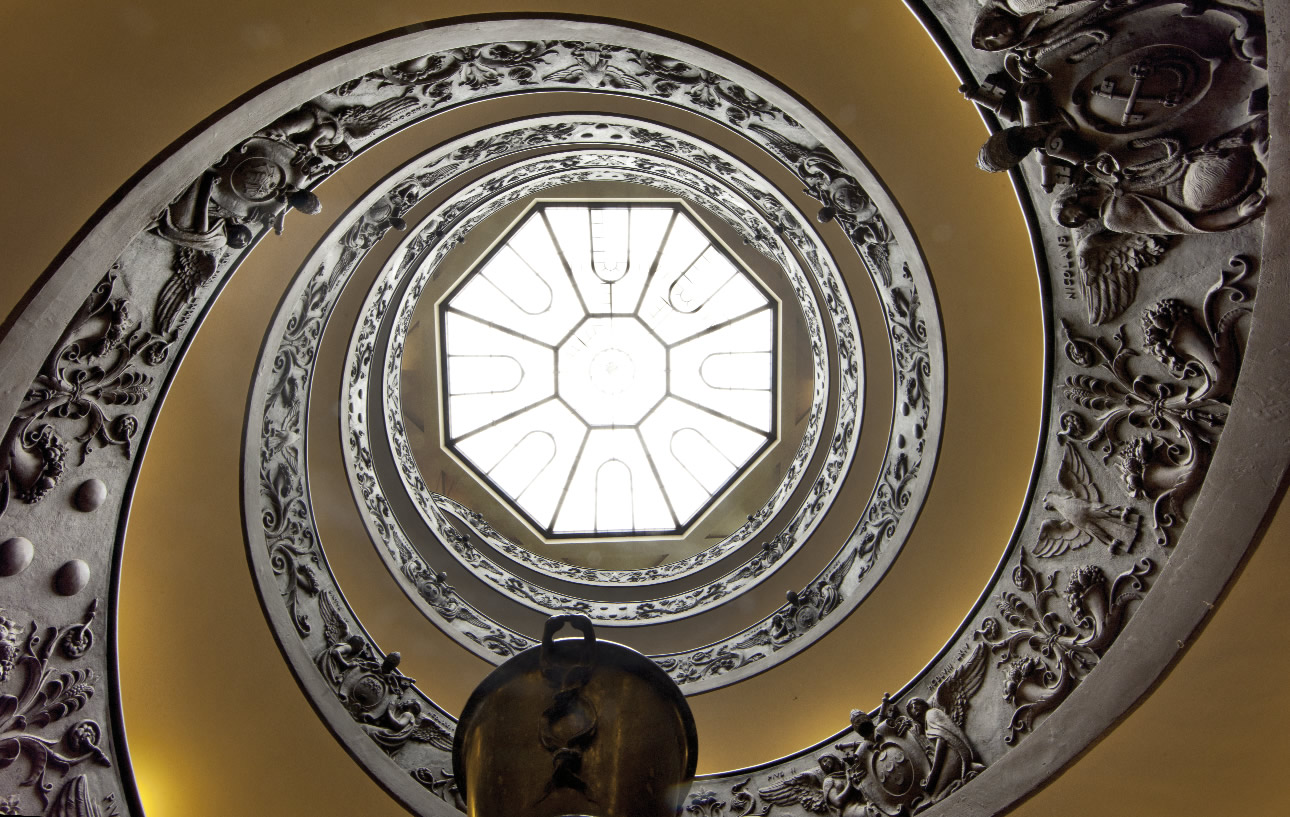 The Vatican museums. Between wonder and amazement

How did the Vatican Museums come into being?

The Vatican Museums are a complex of many extraordinary and diverse collections. Its birth dates back to 1506, to Pope Julius II della Rovere and his important collection of Greco-Roman statuary on the top of the Vatican Belvedere. The Museums actually came into being after several centuries in the mid eighteenth century, as part of the Vatican Library with the Christian Museum and then with the Profane Museum and, finally, with the grandiose Pio Clementino Museum, conceived according to the artistic theories of the great Winckelmann, who hoped for a new dialogue between his contemporaries and Greek-Roman classical perfection, as well as a series of illustrious figures who gravitated around enlightened pontiffs. The institutional order to open the Museums to the world arrived with Pope Pius XI after the Lateran Pacts of 1929, with the opening of the grandiose portal built by Giuseppe Momo in the 1930s on the Vatican Walls by Antonio da Sangallo, then on Italy, and with the famous Staircase, also by Giuseppe Momo, which bridges the gap between Italy and the Vatican Collections. The Vatican Museums have been stratified over the centuries. Here, popes, cardinals, bishops, and lay people in their service have worked for beauty and faith. Think of Raphael’s Rooms, the Sistine Chapel, which began as the private chapel of Pope Julius II. In short, a museum within a museum: collections ranging from Egyptian art – the Gregorian Egyptian Museum was founded in the mid-19th century by Pope Gregory XVI, two years after the foundation of the Etruscan Museum, and therefore of pre-Roman civilisations. To the Museum of Contemporary Art commissioned by Pope Paul Alexander VI. To the Museum of Carriages, later opened to cars and papal sedans in accordance with the wishes of Pope John Paul II. Right up to very recent times with the new and very modern layout of the Vatican Ethnological Museum inaugurated by Pope Francis I at the end of 2019.

Twenty-six museums gathered in a unique place, representing the absolute excellence of millennia of Western art. How can this immense heritage be preserved and promoted?

Conservation is certainly possible. In the Vatican, we have the privilege of counting on a long tradition of protection, conservation, maintenance, and restoration, which can be traced back to the famous letter from Raphael and Baldassarre Castiglione to Leo X, where he stressed the importance of preserving ancient memories as a cultural heritage, not only historical and artistic, but also a testimony to faith and values. Over the centuries, there have been many Vatican laws in this regard, and this is even more evident the birth of the Vatican State in 1929. These were the years of Bartolomeo Nogara’s direction, of Biagio Biaggetti as head of the painting restoration laboratory, but above all of the foundation of seven restoration laboratories, divided by type of material, as well as a scientific research laboratory, all serving the typologies and collections that are preserved, which are very diverse: objects, paintings, frescoes, sculptures, works of contemporary art, furniture, carriages, sedans, which clearly require different specialisations and specialists. Today we count almost a hundred restorers working for the State, together with the Conservator’s Office and the Cabinet of Scientific Research, which allow us to operate at our best as heirs to such a tradition. This tradition is inevitably linked to the Italian one, to the school of Cesare Brandi, Giovanni Urbani, and Gianluigi Colalucci, the latter being the restorer of the century. He in fact restored the Sistine Chapel from 1980 to 1995. He recently passed away. I would like to remember him, because he meant so much to these workshops, to this museum and to the history of art in general.

What do you feel when you walk alone through the museum, the only one capable of collecting this incredible human knowledge? And in such beauty, which works of art move you the most?

The feeling is one of wonder and amazement each time, amidst so much beauty that never tires. Mine is an extraordinary opportunity, and I feel so lucky and privileged to live in a place like this. Choosing a work is therefore difficult. Sometimes there are places, spaces that leave me breathless. One of these is the terrace of the Vatican Belvedere, which overlooks the Cortile della Pigna, designed by Donato Bramante in 1506 at the behest of Pope Julius II, but completed by Pirro Ligorio in 1562, during the pontificate of Pope Pius IV. From this terrace you can enjoy an incredible view, not only of the Vatican Museums and Gardens, but of the city of Rome, my city, and beyond, with Monte Soratte, Terminillo, and as far as the Alban Hills. A skyline of 7 kilometres in the city of the smallest state in the world, the Vatican City State: 44 hectares of wonderful buildings and gardens.

The Vatican Museums, new technologies and global communication. Can eternity and the future meet?

The pandemic has taught us that digital technology is an indispensable tool. In times of crisis, in times of difficulty, in the impossibility of being present, the new technologies allow us to reach a wide audience with our activities, initiatives and projects, which we can still carry out. I think the balance is between digital and real life, between projects that are, let’s say, virtual, but also very concrete. Therein lies the virtue, and therefore the challenge of the future. Therefore, it is essential to have cutting-edge technological tools, but we must also have a direct, empathic enjoyment and vision. A profound spiritual experience that only a real visit can offer.

Do you think that this particularly hard and dark moment will lead to a rebirth?

Absolutely. We have made the most of the pandemic. The best attitude when facing difficulties is to take advantage of the positive aspects, even if they are difficult to see. So, we have rescheduled our work plans for the Museum according to priorities. A selection of actually feasible projects, not a rush to do too much, but rather focusing on important activities while waiting for a return to normality, to a more human condition of life. If I review my commitments in the year of the pandemic, many have been changed. The trips I had planned, to Warsaw, Washington, Seattle, Hong Kong, were transformed into online work appointments, which however led to the same result, albeit different from direct experience. This pandemic has taught us the importance of a recovery of personal values. Having spent so much time in this museum has allowed me to get to know the people I work with better and get to know me better. This is an added value that perhaps would not have been possible if we had not been forced. We found the right balance in human relations, and in the work that mainly took place on the web. Reports of projects in the pipeline, such as restoration projects, which in this case I asked to be updated, and which will soon be shared online for the pleasure of those interested. Sometimes it happens that, being caught up in a single operating model, important details are overlooked. The pandemic has put the emphasis on this, on a way of working that is more focused on priorities, on the essentiality of things, and on a more human and concrete life.