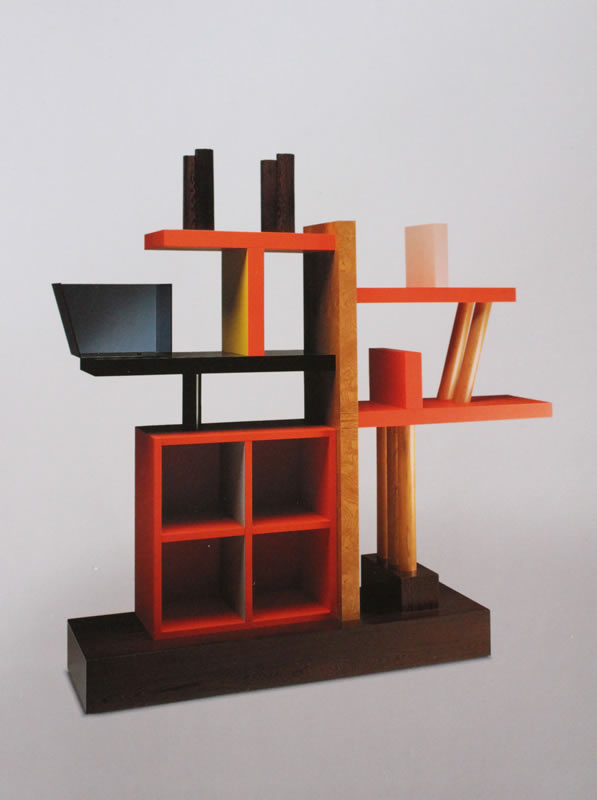 The “Liana” bookcase by Ettore Sottass is the result of a fruitful cooperation between Ferdinando Meccani, owner of “Meccani Arredamenti”, in Cascina, and the designer and architect based in Innsbruck.
It is the mid-eighties, the decade that saw the explosion of the phenomenon “Menphis”, objects of overwhelming creativity that best represent the contamination of aesthetic, philosophical and cultural styles that was called “Postmodern”. A new pop and bizarre classicism that undermines the concept of utility to adopt that of the game, light and fantastic provocation.
Ferdinando Meccani, with his family’s experience in carpentry, started a series of collaborations with leading names in Italian and international design such as Paolo Portoghesi, Ugo La Pietra, Adolfo Notarino, Michael Graves and Masao Noguchi, and of course Ettore Sottsass, whom he admires for his consistent originality. Between 1984/85 and 1993, the year in which the Liana bookcase went into production, Sottsass, on the one hand, sharpened the experimental character of his research, and on the other hand, inspired by Meccani’s works, chose more precious materials such as lacquered wood and wenge wood (a very hard dark African wood he used for the bottom part of the bookcase), which reflects a creative flexibility that from time to time is modulated to the needs of design.
A production of a few examples that shows how the worldwide success of Italian design is the sum of creativity and production at the service of a visionary and free imagination.