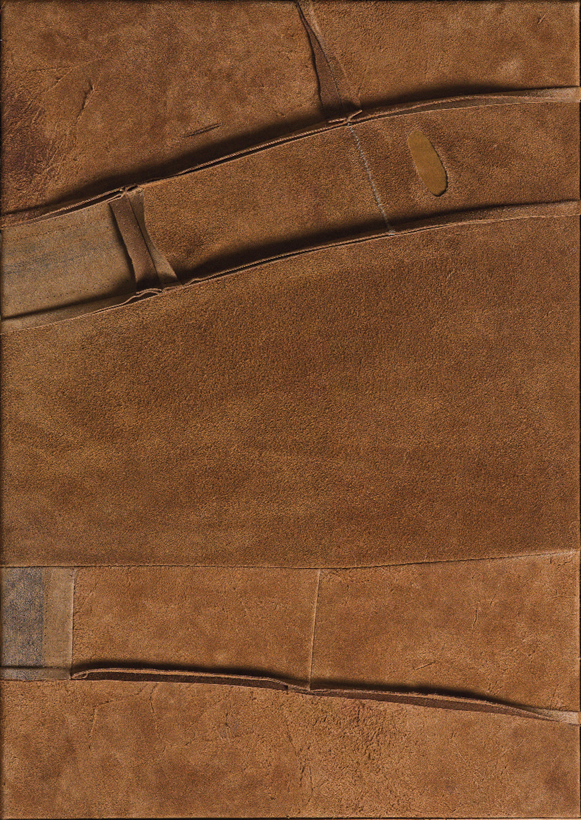 Nuvolo back and front

Just after the Second World War, during the process of reconstructing the cultural life of Italy, newly opened up towards democratic life in the rest of Europe and in the United States of America, there was a longing and craving to overcome the living conditions that had come about during the War. This was witnessed in the cinema, in literature and in the visual arts and it produced a general thirst for a renewal of society.
From 1948 in Rome, in particular, the artistic community hosted the likes of Afro, Capogrossi, Scialoja, Burri, Mafai, Cagli, Mannucci, Colla, Prampolini, Dorazio and his group Forma 1 (with Accardi, Turcato, Perilli, Consagra, Sanfilippo, Maugeri, Guerrini and Attardi). All of this energy was able to produce a propulsive “climate” thanks also to the mercurial and promoting efforts of gallery-owners such as Gaspero Dal Corso and Irene Brin, but also thanks to experts such as Lionello Venturi or collectors like Giorgio Franchetti. This so-called climate attracted the greatest exponents of American art with the likes of Philip Guston, Robert Rauschenberg, Cy Twombly, Willem De Kooning, Franz Kline and the Italo-Americans, Salvatore Scarpitta and Conrad Marca-Relli. In such a context, so full of pressure and stimulus, the work of several younger artists started to stand out – artists such as Nuvolo (Giorgio Ascani) and Mimmo Rotella, who had in the meantime grown “professionally” next to maestros such as Burri, Colla, Capogrossi and Prampolini. Let us not also forget either the oracular and poetic complicity of an outsider like the writer and philologist of ancient languages, Emilio Villa.
Nuvolo was invited to Rome by Alberto Burri. He shared his place of birth with the maestro since both artists hailed from Città di Castello. Nuvolo arrived in the Eternal City in around 1950 and was employed as an assistant in the older artist’s studio in Via Margutta. In January 1950, at the Capogrossi exhibition at the Galleria del Secolo – an exhibition that would set a new change of language – Burri introduced Nuvolo to Colla. Despite the difference in age, a significant friendship grew between the artists which would last until the sculptor’s death in 1968. Colla, who was twenty years older than Burri and thirty years older than Nuvolo, and a friend of both of them, founded and edited in the summer of 1952 the first issue of the magazine, “Arti visive” which was destined to play a direct role in the de-provincialising of Italian art and in the very painting of Nuvolo himself. This came about following the unexpected demise of the “Origine” group (Ballocco, Burri, Capogrossi and Colla) and the setting up in Rome, in Via Aurora, of the “Fondazione Origine” its deus ex machina. From 1952, Burri’s and Colla’s young assistant soon set about getting his highly original art work known. His work was created by means of a silkscreen structure with which he applied layers of colour directly onto paper, and then, onto canvas. Emilio Villa defined these first works, encouragingly, as “Serotipie” and wrote about them on several occasions, first of all in the first edition of the second series of “Arti visive” (1954-1958) where, next to his article, appeared the two “serotipie”, Idea Culturale and Positivamente e non negativamente, both from 1954.
Following on Villa’s footsteps, in 1955, Corrado Cagli (who in 1950 had already become acquainted with the first exhibition of Abstract “signs” by Capogrossi at the Galleria del Secolo) decided to write an unequalled profile of the works of Nuvolo for the first solo exhibition at Florence’s Galleria Numero belonging to Fiamma Vigo. In the Florentine exhibition, alongside the “Serotipie” there also appeared the “Scacchi” (chess pieces), paintings in nitro-cellulose colour on serigraphic paper and composed by means of an irregular-shaped neo-plastic grid, hailing as much from the maxims of elaboration and dissolution as from analytical Cubist spatiality, much like in the De Stijl movement.
Between 1957 and 1958, Nuvolo worked on a new cycle of paintings which he defined as the “Bianchi”, produced in titanium white and serigraphic strokes with nitro-cellulose colours. Lessons learnt by Mondrian and Burri found in him an able interpreter of the same principles – an artist who could extract his own highly personal frequency of sensitivity from both the Cartesian rigour of the Dutch artist and the drammatic epic quality of the Umbrian artist. At this very moment, Nuvolo opened, in succession, a solo exhibition and also took part, a few months later, in a collective exhibition with Dorazio, Perilli and Scarpitta; both exhibitions being held at the Galleria La Tartaruga (1958). These exhibitions enabled him to pursue his relationship with the American artistic environment that was represented by the critic, Lawrence Alloway and by the collector, Peggy Guggenheim, who purchased a significant number of paintings that were donated to several museums in the United States.
The “machine-sewn” work from 1960, shown here and made with sewn and painted pieces of hemp – one of Nuvolo’s masterpieces – bears (juxtaposed and superimposed) modules of that material sewn on the back and the front and mostly painted (although, yet to a much lesser degree, there are also places without any paint at all and modules folded back on themselves). This produces in the actual composition a sensation of differing levels and changing shadows according to the point of view of the person looking at the work. This work is unique in its genre, despite the fact that the cycle of “machine-sewn” works would continue to include equally interesting works over the following five years. The restraint, the formal equilibrium and the spatial nature of this work point, even, to a tactile perception that is usually achieved by relief painting. The work was a prelude to the cycle of the ”Daini” (fallow deer) that would be created over the following two years and would be equipped with a whole host of similar morphological features. 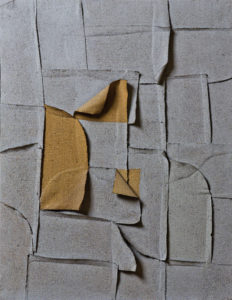