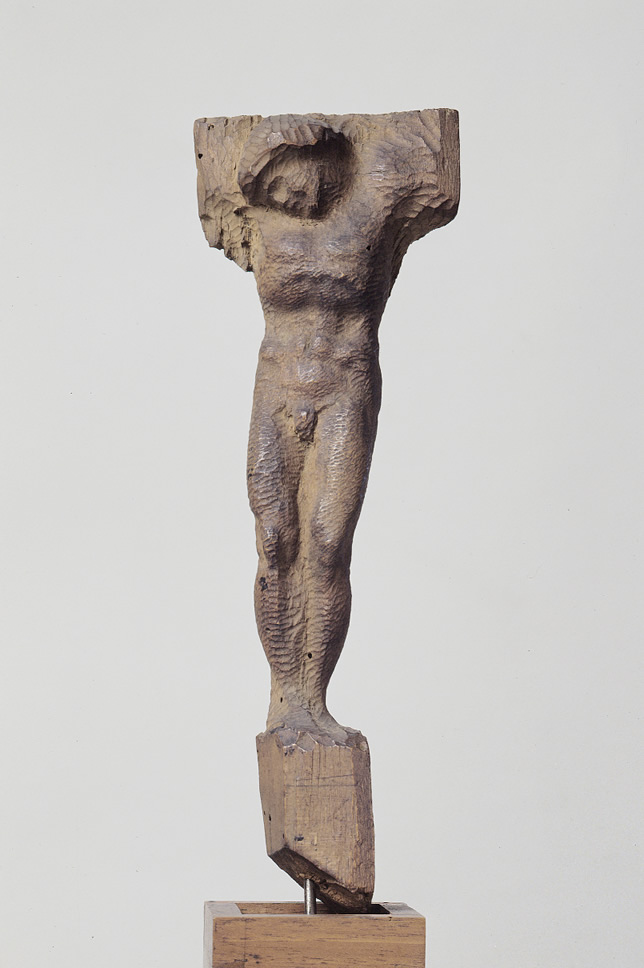 Michelangelo and the human form of doubt

An exhibition on Michelangelo with the highest number of his original works is almost incredible. The historical period and the typicality of the works of the “divine artist” make the setting-up and the choice of the objects to be exhibited very difficult. However, it is “a big exhibition”, accessible (Michelangelo divino artista, Genova, Palazzo Ducale, Appartamento del Doge – until 14 February 2021 – curated by Cristina Acidini, with Alessandro Cecchi and Elena Capretti), understandable and also welcoming, given the intimacy created by the spaces of the exhibition. Michelangelo is a complex artist who “occupies” all fields of art. He is a child of his time, the Renaissance, and was trained in that Firenze de’ Medici where intellectual stimuli for creativity were at the highest levels of human history. It should not come as a surprise, then, that he is a sculptor, painter, architect and poet. Through some of his works displayed in this exhibition, visitors can enjoy his refined and particular execution technique.
The work on display that most impressed me for its simplicity of execution, and at the same time for its refinement and expressive power, is a small lime wood statue depicting a Christ on the Cross, mutilated of the arms, executed in the last years of his life. The work is displayed in the last room of the exhibition. The work shows the signs of the small gouges that were used to dig out the thin trunk (the weight is about 200 grams), which Michelangelo probably chose to leave visible because of his “unfinished” working technique. The legs and torso show the parallel traces of the small tool used, which become slightly wider on the hair and on the base, while there are no signs of smoothing.
The “unfinished” technique is visible in the sculptural works of Michelangelo’s maturity, but some examples can already be seen at a young age as in the Tondi Pitti and Taddei.

He used to sketch the subject and partially leave the raw, unpolished touch, where the emotional tension of the representation is better conveyed and, which would be more attenuated if the work were finished and smoothed. This is a philosophical trait of the artist who expresses in his Rime “Non ha l’ottimo artista alcun concetto/ c’un marmo solo in sé non circoscriva/ col suo superchio, e solo a quello arriva/ la man che ubbidisce all’intelletto. In these verses the artist recounts his work of freeing the subject, already present in the block of marble, through “lifting the lid”, which is the metaphor of the liberation of the immortal soul from the earthly body. This is expressed by leaving the work raw, without reaching the final polishing, as it is not useful for the representation. But while some works are purposely not finished and the choice to leave them raw mirrors the artist’s intent, in other cases they are never finished because of the cancellation by the client or the substitution with another subject, as for example the famous Prisons for the mausoleum of Julius II, never placed on the funeral monument. On the contrary, one of the best finished and polished works is the famous Piety, preserved in St. Peter’s in the Vatican. An unfinished work, due to a black vein at the level of the face, included in the exhibition is the Cristo Giustiniani. The work was completed by an unknown sculptor. The left calf shows the row of holes made by the hand drill that delimit the whole outline and that might have been made by the master himself. It is known, in fact, that he started sculpting right from the bottom and then went up towards the top.

The frescoes in the Sistine Chapel deserve a separate chapter in the description of Michelangelo’s work. I would like to just mention the fact that, although he trained in Ghirlandaio’s workshop, the “divine” was not particularly familiar with the fresco technique and made several attempts to execute the vault of the Chapel before reaching perfection. Among the few paintings by the master, the one attributed and conserved at the National Gallery in London, the Madonna Manchester, is an unfinished one and shows the different moments of the pictorial development. The initial layer of the preparation (the white plaster applied on the panel), the design drawing, the green background (the green background applied under the complexion) and finally the colour are in fact well visible.
A last curiosity, before concluding. In the first room as soon as you enter on the right, there is the most famous “shopping list” in the history of art. This work, actually the back of a sheet of paper on which a letter was written, represents a menu written by Michelangelo and next to it are drawn the food to buy listed in the writing. The list was probably intended for some collaborator who did not know how to read and who had to go and buy the food. That is why the drawings are executed with meticulous detail and great precision.