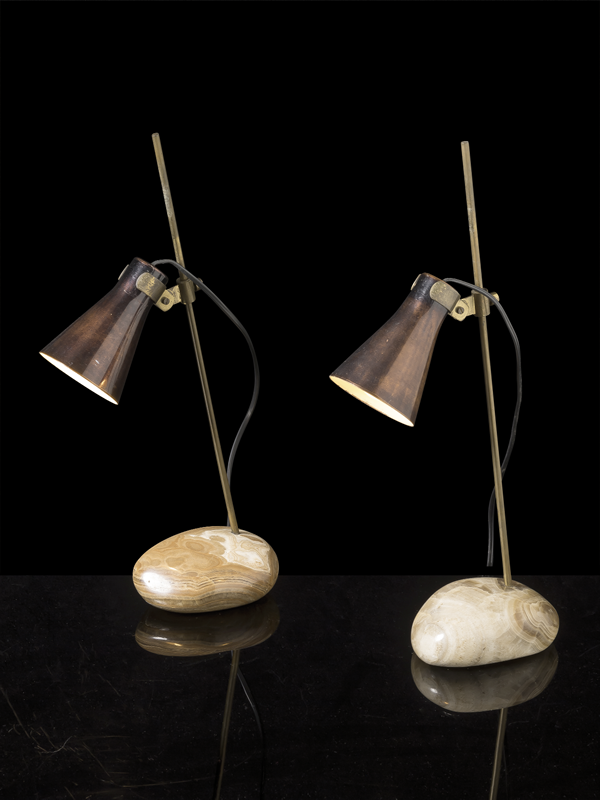 by Andrea Schito and Giacomo Abate

Luigi Caccia Dominioni (Milan 1913 – 2016) is a leading figure in 20th century Italian design. His career spanned much of the last century. In 1936, he graduated from the Regio Istituto Tecnico Superiore (future Politecnico di Milano), where he got to know Livio and Pier Giacomo Castiglioni, Cesare Cattaneo, Giannino Bernasconi, the future BBPRs, having Luigi Moretti and Piero Portaluppi among his teachers. He stood out thanks to his original style, which he developed in the field of industrial design with Azucena, which he founded in 1947 with Ignazio Gardella and Corrado Corradi. Together they created hundreds of objects that have become absolute must-have of Italian design of the twentieth century. The brand’s distinctive traits are formal elegance, understated luxury, pure and clear aesthetics, and top-level manufacturing.
The next Design and Italian Style auction, on 17-18 June, will present two rare table lamps, “Sasso” model, from around 1949, in Pakistan onyx, polished and burnished brass. It represents at best the unmistakable style that ironically mixes curves and straight lines, bourgeois tradition and contemporary living, dream and everyday life, surrealism and practicality. The innate ability to draw inspiration from the humble archetypes of everyday life, updated according to the transformations of domestic life, in a country that had been destroyed by the war and was preparing for the well-being of the economic boom.