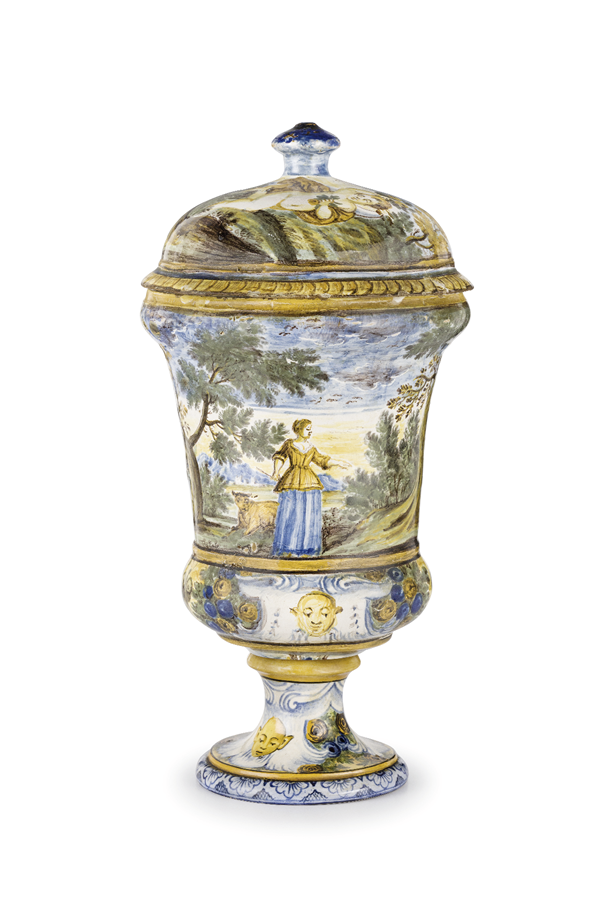 The next catalogue of furnishings and art objects also includes some European ceramics: among these, an interesting Castelli vase decorated with figures and landscape and with a decoration of masks and cherubs, datable to the third quarter of the eighteenth century. This work can be attributed to the workshop of the Cappelletti family, a dynasty of painters linked to the Grue family that, during the eighteenth century, had among its greatest exponents Nicola and, above all, his brother Candeloro. It is a classic example of the taste for decoration adopted by the furnaces of the city of Castelli, Abruzzo, starting from the middle of the seventeenth century: until then, the potters of Castelli had limited themselves to producing a vast collection of coloured or white pottery quite similar to that of other production centres, especially, Faenza.

However, around the sixties, the shops of the city decided to turn to the istoriato style, a style that had already been the glory of Italian majolica between the Renaissance and Mannerism. Thus, big and the small plates started to be produced. They were decorated with scenes often taken from engravings by famous masters such as Carracci. The edges were decorated with volutes and cherubs flanked by heraldic weapons, using colour patterns with great decorative impact.
Even more famous, perhaps, are the vases with lids, whose vast surfaces offered the skilled painters the chance to create animated landscapes, where the large figures constitute the focal point of the composition.

Many dynasties of ceramic painters were leading such production: the most famous included the Grue, starting with the first and perhaps most famous personality of the family, Francesco. His family was so ramified that it could be linked to various other families of Castelli’s painters (for example, the Pompei). Among these, also our Cappelletti, who, over three centuries, continued the pictorial tradition of the istoriato style.