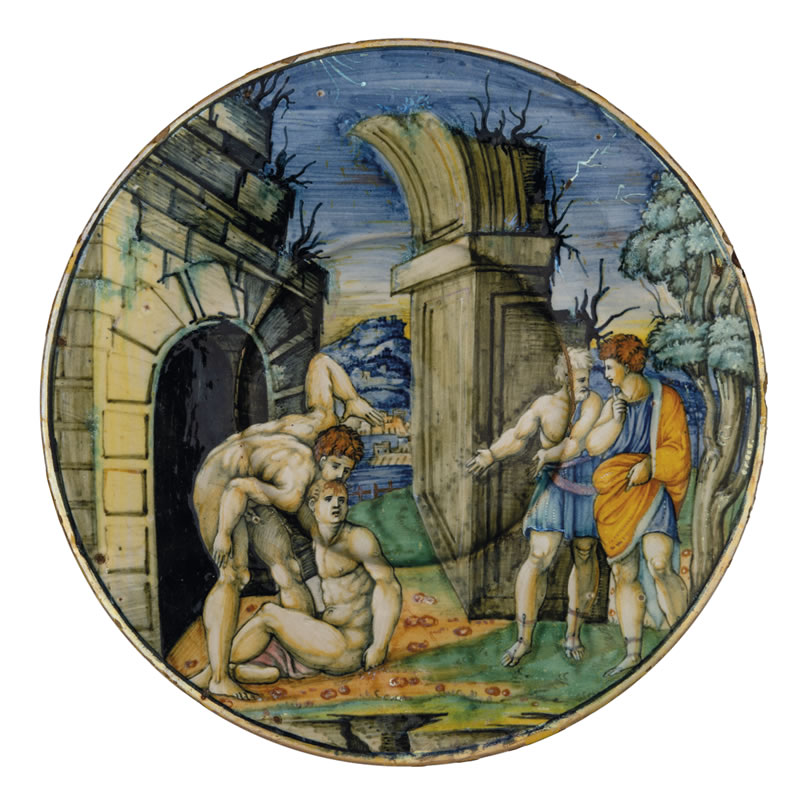 Not only was Grazia Biscontini Ugolini an important scholar (and a guide and example for many young researchers). She was also an intellectually gifted woman: she was able to combine an impeccable “use of the world” with rare grace and simplicity, thus attracting the esteem and affection of all those who knew her.
Two of the most famous scholars of our generation, Carmen Ravanelli Guidotti and Raffaella Ausenda, who were both esteemed friends of hers, participated in the catalogue of the next sale dedicated to her ceramic collection.

A collection that reflects the passions of those who put it together, but also that attitude to collecting so typical of her family of origin, the Ugolini.
This collection is the result of purchases made over the last 50 years. It also includes ceramics purchased by other members of the family (many others, it is well known, were meant by the Ugolini family to be publicly displayed). It can be divided into three main groups: Renaissance majolica, comprehensive productions, and finally majolica, mostly from Pesaro, between the eighteenth and twentieth century. This is the most numerous and provides an almost complete picture of that wide time span, characterised by a great formal balance and never devoid of study interest: after many years, Grazia Biscontini Ugolini’s studies remain valid and reliable, in many cases irreplaceable, in order to deeply know those productions (from Pesaro).
On the other hand, the Renaissance majolica and the comprehensive collection include fewer items but all equally valuable. It will suffice to mention the decorated lustreware, a dish that came out of Mastro Giorgio Andreoli’s workshop in Urbino, in 1531 and which has now been attributed to the so-called “Pittore del bacile di Apollo” (Painter of Apollo’s Basin). Decorated with “Dante e Virgilio guardano il conte Ugolino e l’Arcivescovo Ruggieri” (Dante and Virgil look at Count Ugolino and Archbishop Ruggieri) and dated on the back, it belongs to the collections of the Ugolini family. The composition is based on engravings by Agostino de Musi, known as Agostino Veneziano, and Marcantonio Raimondi, by Raphael. Its great formal balance stands out, with the couple on the left surfacing from the dark background of the imposing architectural mass of the glacier, while the other couple on the right stands in front of a pillar with a ruined arch and an open landscape in the background.

This majolica, which bears the inscription “1531/ Mo Go/ da (u)gubio”, has enjoyed considerable attention over time. Because of its high quality and rare Dantean theme, it was in fact studied several times in the early 1950s, especially by Giancarlo Polidori, when Giorgio Ugolini bought it in 1950 from the antiquarian Riccardi from Florence, who in turn had acquired it two years earlier from Monte dei Paschi di Siena. Mallet wrote the most interesting piece about this dish in a large study dedicated to one of the best majolica painters who worked in Urbino in the early 1930s, an artist gravitating towards the two greatest personalities of the time, Nicola and Xanto. The scholar identifies twenty-eight “historiated” works, which can be associated for the same stylistic characteristics to an unknown painter he calls “Pittore del bacile di Apollo” (Painter of Apollo’s Basin), from the subject of a basin of the Civic Museums of Pesaro, dated “1532”, and that Mallet considers also the author of our dish.

The “comprehensive” majolica collection, which includes many items with the coat of arms, is just as interesting. Here, we would like to mention the help offered by Gabriele Reina, one of the best specialists in the sector, while drawing up this catalogue. These lots include a very interesting perforated cup and a dish, both belonging to the seventeenth-century and both decorated with the same coat of arms, which probably belong to a single service or “cupboard”. The coat of arms leads back to the Spada, a family who commissioned many pottery items, especially Faenza’s bianchi. Originally from Brisighella (but coming from Gubbio on an even older date), about ten kilometres from Faenza, the Spada acquired means, power and nobility at the Roman Court, and had possessions and palaces not only in Faenza, but also in Bologna and Rome. The majolica sets created for them were conspicuous and continually renewed over time, and of all types, with styles that were typical of the culture that developed in the applied arts between Mannerism and Baroque. The prelate’s coat of arms confirms the chronology proposed in the first decades of the seventeenth century for our two works: in fact, it could refer both to one of the cardinals who left the family in these decades and to Filippo Spada, patrician from Spoleto, bishop of Pesaro and papal treasurer around 1636.

Finally, the group of majolica and terracotta made between the eighteenth and twentieth centuries, centred on the production of Pesaro: it includes a beautiful series of soup tureens and other pottery decorated with a “small fire”. The ones decorated with the famous “rose”, in particular those from the kilns of Casali and Callegari, stand out for their style and pictorial mastery. The nineteenth and twentieth century examples, a fascinating selection of the cultured appropriation art typical of Pesaro, are truly emblematic: here, we would like to mention Molaroni and Melandri, with a golden lustreware depicting Orpheus, probably dating back to 1936, where Raphael’s idea appears transfigured and imbued with a dreamy grace. 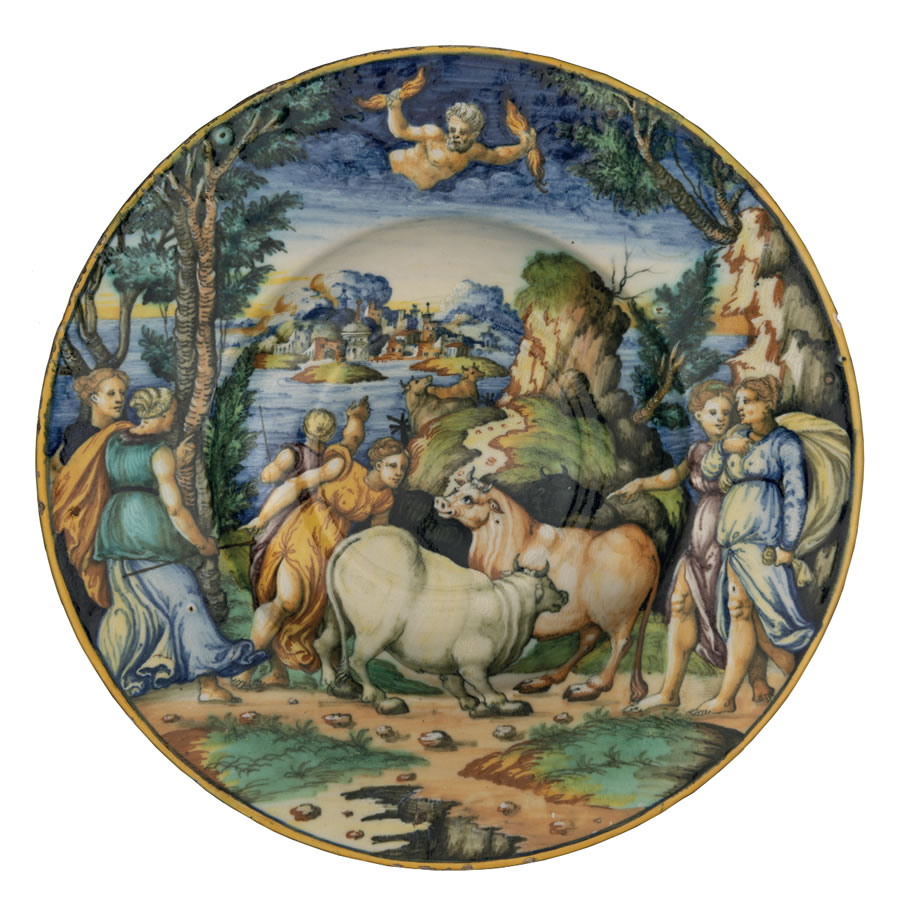