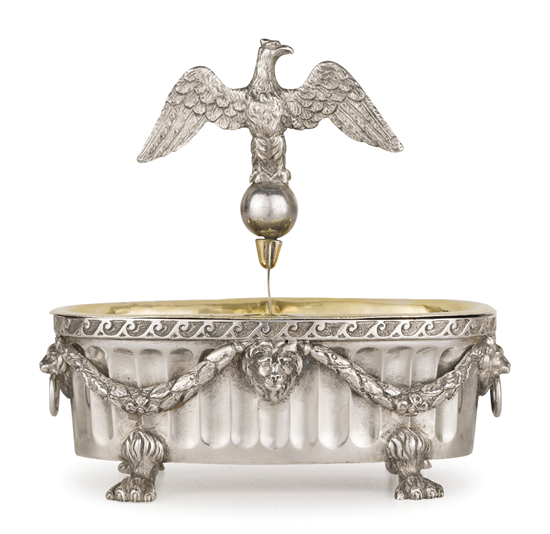 Giuseppe Valadier (Rome 1762 – 1839) is a complex figure in the Roman scene of the second half of the 18th century. Son of master silversmith Luigi – one of the most important figures in 18th century European decorative art thanks to his style that blends, with superb and sensual elegance, the baroque exuberance with neoclassical rigour – and Caterina Della Valle, he was a very precocious talent. When he was only thirteen years old, he won the gold medal in the Clementino competition of the Accademia di San Luca. After his apprenticeship in his father’s workshop – where he worked until 1827, after his father’s dramatic suicide in 1785 – he developed his interest in architecture to become an eminent figure of his time. He was entrusted with prestigious assignments such as that of architect of the Sacred Palaces of 1781 for Pope Pius VI, and of appointed architect in 1786, as well as an appreciated teacher at the Accademia di San Luca from 1821 to 1837. He also gave Piazza del Popolo its definite shape. In his project, the square took on its current elliptical shape, decorated with numerous fountains and statues, which extends towards the terrace of the Pincio and the Tiber River.
During this period, while continuing his work as an architect, Giuseppe continued to lead the workshop where, according to the chronicles of the time, many silversmiths, bronzesmiths, jewellers and engravers worked.

The next auction of the Department of Silver will include four partially gilded silver saltcellars made by Giuseppe Valadier in 1791, which bear the heraldic weapon of the Chigi delle Rovere, belonging to Bulgari collection in Rome. Originally, there were eight. Their bodies are shaped like an old-fashioned basin, grooved and resting on four feral feet, with a festoon supported by four lions. The edges have a band of recurring waves, the inner souls are bipartite by a septum from which eagles rise with spread wings, resting on a sphere, which serves as a handle. They embody his refined style that revisits the memory of a lost classicism through his eclectic and sophisticated imagination.