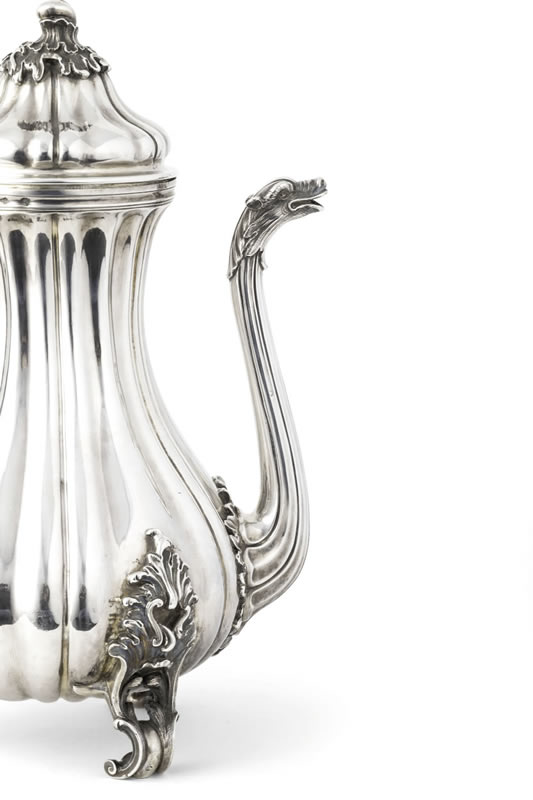 What does an expert do when looking at a silver object? He analyses its construction, touches it in every part, and finds those characteristics that make it “special”.

The first exceptional object that will be hesitated in the next auction of Silver, Icons and Objects of Russian Art on June 30, is a silver coffee pot made in Rome, around 1820 – 1830, by the famous and important silversmith Pietro Paolo Spagna.
At first glance, the striking elements are its size and its weight: 1,800 grams per 30 centimetres of height. Not many coffee pots are this size. Its pear shape is superb, beautifully rounded and with an elongated neck, the arched surface, the lid with naturalist handle, the sinuous wooden handle with silver joints, the zoomorphic beak, but above all the three feet. They merge with a naturalist joint and end in a curl. Famous is the origin, which is the Petochi collection of Rome. The plant is definitely eighteenth-century, most likely it was made on commission, based on a type pleasing to the customer with the customisation of the feet.

Pietro Paolo Spagna (Rome 1793 – 1861), author of this masterpiece, descendant of a lineage of great Roman silversmiths, became master on April 15, 1817 and directed the workshop that belonged to Giuseppe Valadier, which he took over that year. Among his works are the beautiful coffeepot with the Borghese coat of arms, now kept at the Metropolitan Museum in New York, and the large monstrance kept in the church of St. Augustine in Rome.
The second extraordinary object for its engraving richness is a partially gilded silver tankard made by the goldsmith A. Zaitsev in 1749. It rests on three elegant spherical feet. The cylindrical body is engraved with three scenes in circular niches, the first depicting “Delilah cutting Samson’s hair”, the second recounting the “Prodigal Son living as a debauched man”, and the third with the “Departure of the Prodigal Son”. Finally, the rich decoration is embellished by the engraved lid with the scene of “Prophet Nathan reprimanding King David.