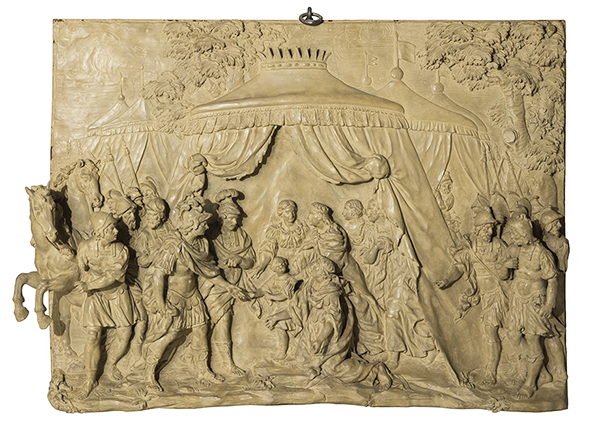 “The Florentine, Girolamo Ticciati was an excellent poet, architect and exceptionally-talented sculptor, a pupil of Giovanni Foggini”. These were the words of historian Francesco Maria Niccolò Gaburri in his Vite di Pittori, from around 1730 – 1742, to describe maestro Ticciati. A description, therefore, in a mere few lines, of an artistic career that was imbued with a talent that was simply indisputable in which over-the-top Baroque blends with the almost theatrical levity of the Rococo to produce absolute sculptural marvels such as terracotta plaques that were attributed to him and include The Family of Darius Before Alexander, hailing from an aristocratic Italian collection that will be put under the hammer in the Furniture and Furnishings auction on November 15th . Within the complex composition of the painting, the most exceptional element is an almost 360 degree modulated decomposition of figures in the foreground passing into the bas-relief of the central drape with bushes and the flattened relief of the figures at the side. The excitement of the figure of the horse on the left is spectacular as it lifts its front legs and slowly departs from the scene at the side of the painting. A wooden and bone money cabinet is both grandiose in appearance and highly eclectic. It hails from a workshop in the western Mediterranean area and is strongly influenced by Islamic architectural motifs which are also reminiscent of international gothic styles. It is a divertissement of exceptional refinement and was created in the last part of the Nineteenth century. It is an object in which complexity and decorative richness along with such a sensational degree of quality, size and state of preservation, make it an absolute work of art in terms of style.
Lastly, two Neoclassical frames attributed to Giuseppe Bonzanigo – a superb carver from Savoy – exude a high level of flair and imagination that is so cleverly transformed into the utmost elegance thus demonstrating supreme technical ability and unsurpassable equilibrium.