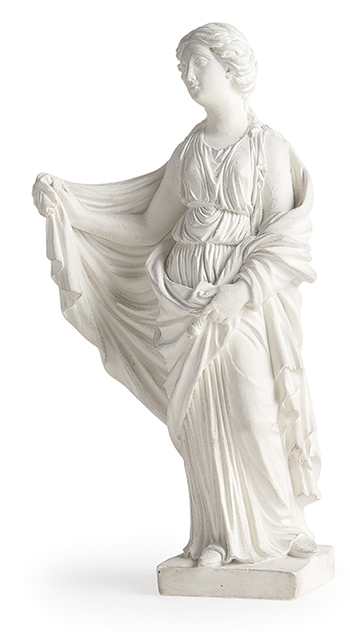 The Department of Ceramics and Glass is planning an important sale of maiolica, porcelain and glass from Italy and Europe for February 2017. The pieces date from the Eighteenth century right up to the Twentieth century. The catalogue will be presenting an interesting focus on a broad selection of materials and workshops from a whole three centuries dedicated to the “arte del fuoco”, the art of fire. Among the many works being offered in the auction, there will be an interesting figure from the antique from the Eighteenth century. The figure is perhaps allegorical and is a model that is unknown to even the most recent studies. It was made at the manufactory of the Real Fabbrica Ferdinandea in Naples and is datable to the last part of the Eighteenth century. It is typical of the heavily classical style that Filippo Tagliolini employed so successfully in Naples at that time, thus turning the city into one of the most important centres for artists seeking the antique in the Eighteenth century. Among the ceramics from the Twentieth century, there is the attractive polychrome porcelain plate from the “Pittoria di Doccia” from 1925. It is decorated with a figure representing “Hospitality” and is a highly elegant example of the characteristic taste – typical of Italian Classicism – that had been imported by Gio Ponti to the Tuscan manufactory during his time there as Director (estimate 3,000 to 5,000 Euro).
The deadline for inclusion in this Sale is January 15th 2017.
The November sale includes a small group of ceramics from the Eighteenth and the Nineteenth centuries with a selection of maiolica and porcelain from a variety of Italian and foreign manufactories among which a highly interesting series of Neapolitan figures in bisquit and statues from the antique in terracotta also hailing from Naples.