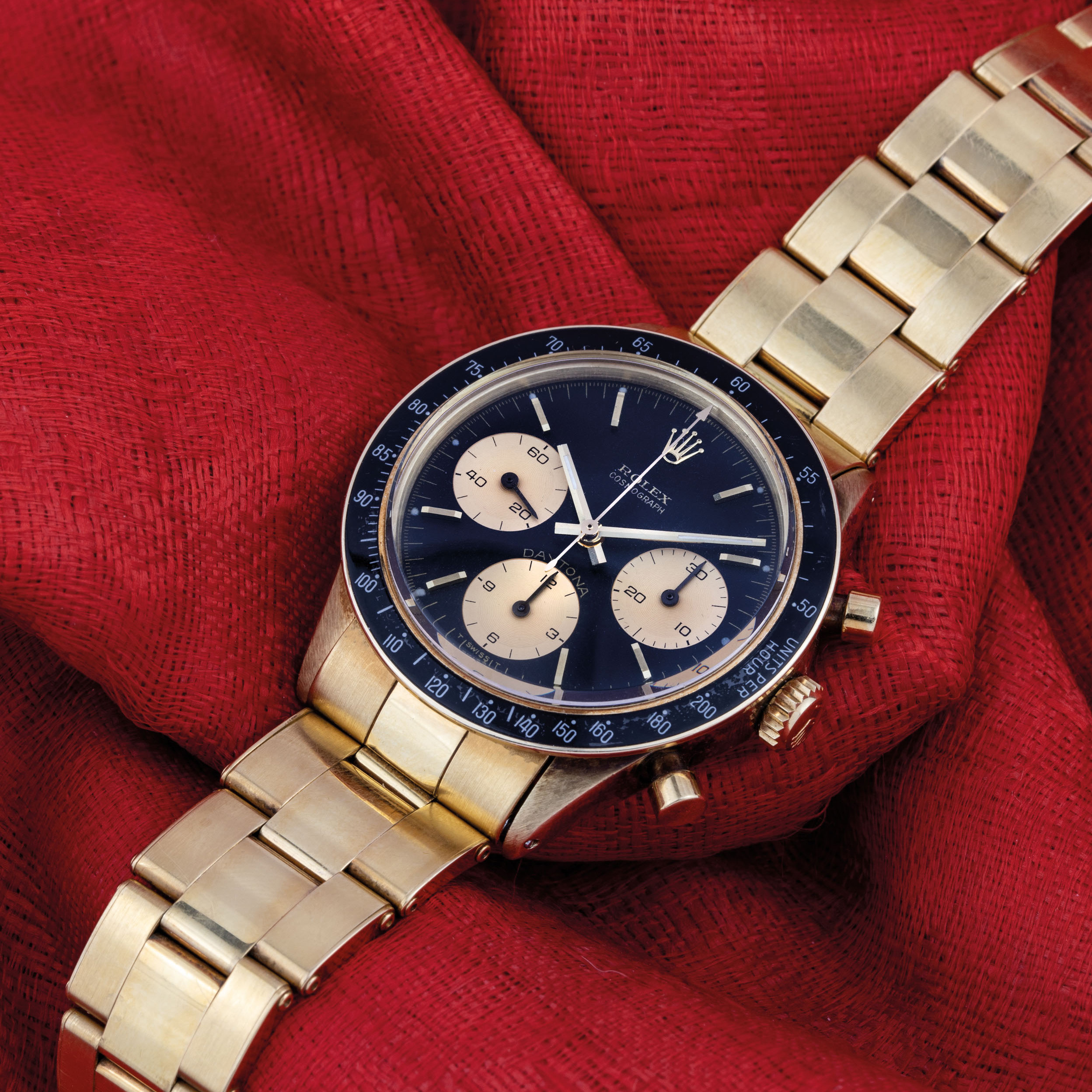 Harmony of time is unique

The mechanical complications and multiple functions of fine watches remain, today more than ever, the object of a collector’s fascination with these extraordinary time-measuring objects made by the most renowned watchmakers. Three spectacular specimens are to be highlighted in the upcoming Monte Carlo sale on 19 January 2023.

The first is a sought-after 1968 Rolex Chronograph Daytona, Ref 6241, in 14K yellow gold with a black dial, champagne seconds-minute and hour counters with the expertise of Valter Barocco (lot 385, estimate €130,000 – €180,000). Launched in 1963, it was designed to meet the chronometric needs of professional pilots while remaining an absolute and timeless reference point in the firmament of sports chronographs. It is a model that pays tribute to a place – Daytona, Florida – where the passion for speed and racing is expressed at the highest level with the 24-hour endurance race for sport-prototype and Grand Touring cars that has been held since 1966 at the Daytona International Speedway, of which the prestigious Swiss brand has been the main sponsor since 1991.

The second is the Patek Philippe Nautilus the classic watch par excellence, created and designed by Gérald Genta in 1976 (lot 342, estimate €80,000 – €100,000), which has become an authentic watchmaking icon thanks to its pioneering role among high-end luxury sports watches.  An example of what is still considered one of the masterpieces of modern haute horlogerie design for its octagonal case inspired by a ship’s porthole will be offered for sale with a stainless steel case, diameter 42 mm, Ref. 3700/1 circa 1979, with a blue dial, window at 3 o’clock, baton hands, mechanical movement with automatic winding.

Finally, an extremely rare URWERK UR-102 ‘Night Watch Sputink’ circa 1997, stainless steel case, diameter 37 mm and crescent dial with rare ‘wandering hours’ (lot 343, estimate €50,000 – €80,000). This model was presented at Baselworld in that year and marks the founding of a brand that from its inception has been distinguished by a totally new watchmaking approach. The case design, with its round convex shape and 8 lugs, was inspired by the Soviet satellite Sputnik, designed by Martin Frei, assembled by Felix Baumgartner and sculpted by Thomas Baumgartner. Incredibly rare and historically significant, the UR-102 offers collectors the chance to own one of the first watches created by one of the first Creative Independent Horology, a genre that would soon take URWERK to the top of haute horlogerie. This watch was produced in a very limited production run and the example in the catalogue is number 14. Extraordinary models that best represent the beauty of watchmaking, a passion that with specimens like these every collector can experience to the full.