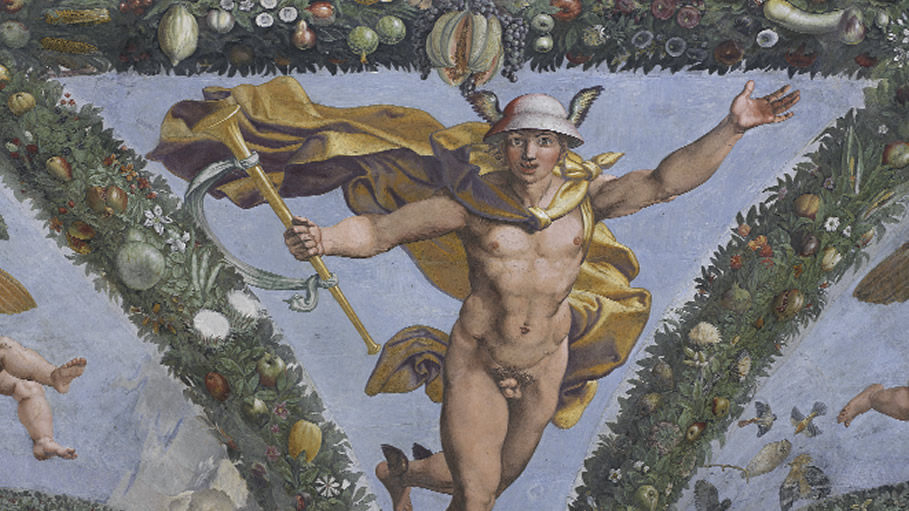 The discovery of the sumptuous vestiges of the Domus Aurea. The Apollonian perfection that reveals itself in Raphael’s Vatican Rooms. The titanic conflict between matter and spirit that Michelangelo confronts on the walls of the Sistine Chapel. They all represent the apogee of the Renaissance intended as a living memory of classicism.
This is Rome returning to its imperial splendour, where beauty is achieved between ecstasy and torment, beauty and voluptuousness, as desired by Pope Julius II and continued by Pope Leo X de’ Medici. The latter saw Giovanni da Udine, still in his twenties, apply his innate talents in “counterfeiting very well all the natural things of animals, drapes, instruments, vases, vegetables” to portray – according to Giorgio Vasari – the group of instruments of the Ecstasy of Saint Cecilia by Raphael. Together with the genius from Urbino and other illustrious collaborators, he made the preparatory drawing of the Miraculous Catch for one of the ten tapestries destined to decorate the base of the Sistine Chapel, made between 1514 and 1516.
The naturalistic skills of the Friulian artist are evident in the festoons of the Loggia di Psiche at the Farnesina, decorated on commission of the Sienese banker Agostino Chigi between 1517 and 1518. Even earlier, in the ‘grotesques’ used to decorate the flat and ‘stufetta’ of Cardinal Bibiena in the Vatican. After the death of the Divino Urbinate, in the decoration of Villa Madama – together with Giulio Romano – completed in 1525 for Clement VII. Motifs that he would use again superbly in the Vatican Loggias (completed in 1519), together with endless subjects taken from the world of animals and plants, which act as a counterpoint to the sacred stories frescoed in the vaults of the thirteen bays of the long room, taking the form of a sort of encyclopaedia in images.
A refined and multifaceted master who will be the absolute protagonist of the exhibition “Giovanni da Udine tra Raffaello e Michelangelo (1487 – 1561) – curated by Liliana Cargnelutti and Caterina Furlan – to be held in the Ancient Art Galleries of the Castle of Udine from 12 June to 12 September 2021.