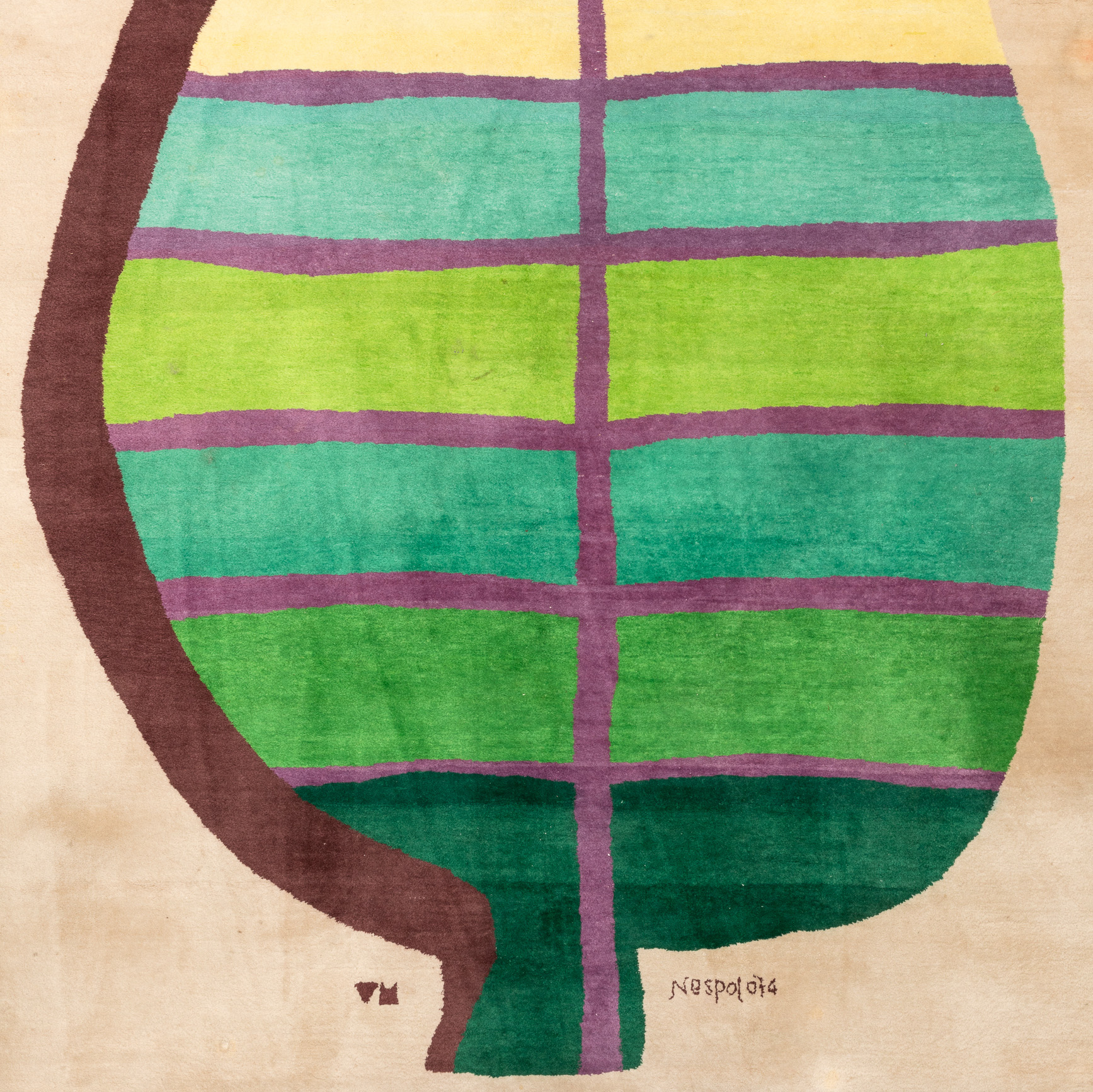 Elio Palmisano’s atelier represents one of the few Italian companies to have created a large number of tapestries and carpets during the second half of the 20th century, in synergy with contemporary artists. From around 1968 to 2005, Palmisano created a collection of almost 320 tapestries and carpets, designed by renowned artists and designers from Giacomo Balla to Ettore Sottsass. By using ancient craft techniques, Palmisano has truly succeeded in weaving the scenario of 20th century Italian art. The manufacture of Elio Palmisano has been much talked about in the almost forty years of activity, during which his works were appreciated and valued especially by the new design world.

Born in San Michele Salentino in 1935, the young Elio began to ‘fall in love’ with art in high school, thanks to the passion of his Art, History and Philosophy teachers at the Liceo Classico in Francavilla Fontana who ‘opened his mind’. After finishing his studies, he went to Rome intending to pursue a diplomatic career. Rome, however, was but a brief stopover; shortly afterwards Palmisano found himself in Milan, in the lively artistic environment of Brera. An encounter with some important publishers led him to supervise art texts destined for publication. Shortly afterwards, and without having any knowledge of the art market, he opened his own gallery on Via della Spiga: a meeting place for collectors and enthusiasts, the Galleria dell’Incisione was for Palmisano an opportunity to get to know and deal with illustrious personalities of the time: ‘In 1962, I founded the art gallery in Milan called “Galleria dell’Incisione” to exhibit Umberto Boccioni’s “drypoint engravings” that art scholars believed to be missing. Thus began my activity as a gallery owner. In the course of my work, I met artists and designers (Victor Brauner, Roberto Caspani, Beppe Caturegli, Piero Dorazio, Nathalie Du Pasquier, Gianfranco Ferroni, Tihamér Gyarmathy, Friedensreich Hundertwasser, Oskar Kokoschka, Ugo Nespolo, Mario Radice, Mauro Reggiani, Beatrice Santiccioli, Ettore Sottsass, George Sowden, Mark Tobey, Luigi Veronesi, and many others); art scholars (such as Gillo Dorfles, Enrico Crispolti, Mario de Micheli, Marco Valsecchi, Domenico Porzio and Achille Bonito Oliva) and writers (in particular Dino Buzzati, Indro Montanelli, Alberto Arbasino, Leonardo Sciascia and Giorgio Bocca)’.

The exhibitions at the Galleria dell’Incisione primarily showcased the historical European avant-gardes, from the artists of the Viennese Secession to the New Objectivity to the Italian Futurists. It was an exhibition dedicated to the masters of Futurism Giacomo Balla and Fortunato Depero in 1966 that profoundly marked Palmisano’s life. The focus on that occasion was on applied art projects and, thanks to Balla’s daughters, Luce and Elica, Palmisano discovered the textile designs created by their father, which had only remained at the design stage. With the enthusiastic approval of Luce and Elica, Palmisano decided to realise those unfinished works: thus came the ‘fatal’ encounter with textile art.

Palmisano aspired to become the undisputed protagonist of the Italian artistic weaving world of the century, but for him this meant entering areas that were completely unknown to him for the first time. He therefore set out to discover every secret of that ancient art, visiting in particular those countries that still handed down its ancestral traditions. He therefore set off to Turkey, Romania, Afghanistan, Pakistan, Kashmir and China, even reaching Iran and Iraq. In each place where he stopped, he delved into the various techniques and working methods; he lingered long to learn a specialised culture, with the intention of acquiring all possible skills to adapt textiles to the expressive forms of contemporary art. Indelible in his memory are the memories of his stay in Srinagar, in Indian Kashmir.

In the Digital Auction of Antique Rugs and Fabrics open until 15 November 2022, the ‘Foglia della Vita’ wool leaf carpet made around 1974 to a design by the artist Ugo Nespolo and attributed to his famous atelier will be auctioned (lot 27, estimate €3,500 – €4,000). 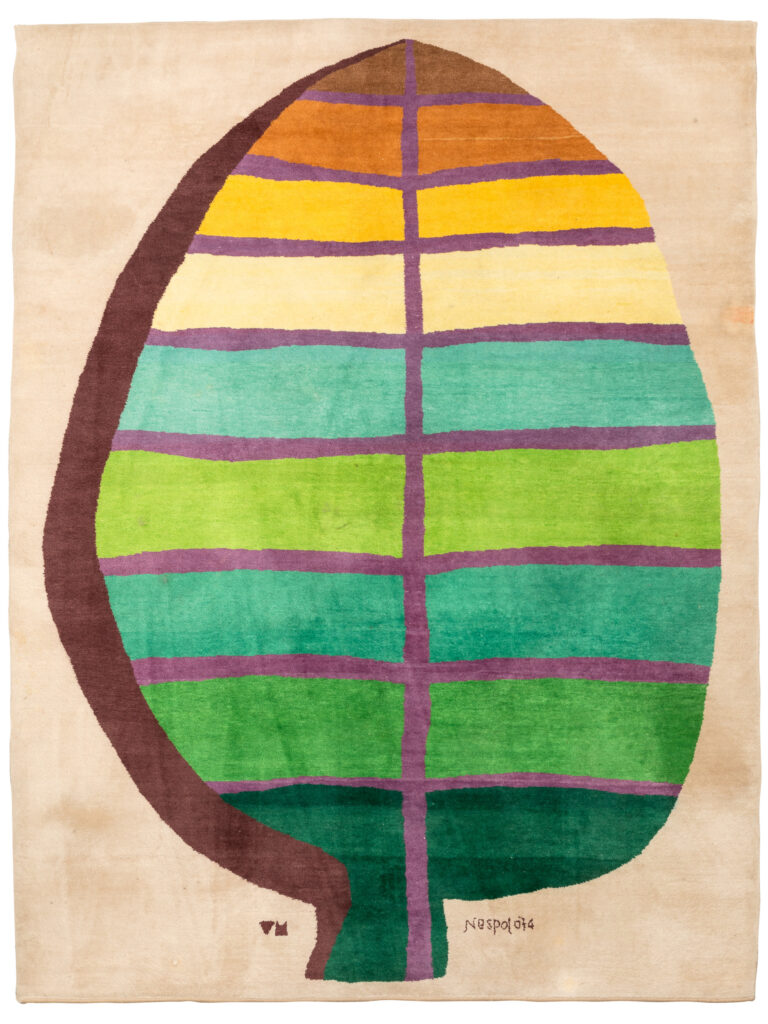