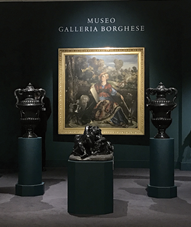 Astound yourselves, please, but never be shocked

Is it truly scandalous that an Italian museum exhibits some of its masterpieces on the occasion of an art fair? Are we, by any chance, Italy-centred in art, as well of course in food? All the way from Maastricht to Florence the desire appears to be all about astounding and constructing the latest brands.
TEFAF, a highly important appointment with old and ancient art, held every year in the Dutch city of Maastricht, is an opportunity to discover treasures that are all too often hitherto unknown or never been included in an auction and now offered up all shining and new. At TEFAF, collectors, historians, dealers and curators of the most important and international art institutions are given the chance to meet, all in search of unique works of art with which they can further embellish their collections. The space on the stands is considered to be a private room where information is passed around and everyone can comment on what is going on all around the fair. This year, the novelty appearance was of Rome’s Galleria Borghese: the first Italian museum to have been invited to take part in TEFAF. However, eminent foreign colleagues had already crossed this particular threshold. This time, the presence of the Galleria Borghese had been a wonderful opportunity to admire several masterpieces without their own historical setting. Anna Coliva, the Director and expert of the Galleria Borghese, underlined the fact that, “At TEFAF, we were able to show “The Allegory to Slumber” alongside two vases by Algardi, whereas in Rome the two masterpieces are shown in two different rooms”.
And yet, this whole operation of a “visiting museum” did not please everybody. Indeed, standing before a painting by Dosso Dossi in a dealers stand, the comment uttered by an art historian was both concise and to the point: “It is scandalous that the paintings of the Villa Borghese are exhibited on the first floor”. However, the thirteen works exhibited in the section TEFAF Paper also included decorative objects and statues – from the marble statue of “The Gypsy Woman” (around 1610) commissioned by Scipione Borghese and undertaken by Nicolas Cordier known as Il Franciosino (1567-1612). To “The Amalthea Goat” by Gian Lorenzo Bernini (1598-1680) and, as mentioned before, Algardi’s “The Allegory to Slumber” (1598-1654). Bernini’s statue, in white marble, is of a goat crouching between a satyr and Baby Jupiter. Among the paintings that left their mark, there was “La Melissa” by Dosso Dossi (around 1486–1542), a painter at the court of Ferrara during the Renaissance. The work belongs to a group of paintings that the Cardinal Enzo Bentivoglio sent to Scipione Borghese from Ferrara in 1607. Furthermore, the exhibition included a selection of paintings by Pietro da Cortona (around 1596-1669), among which the portrait of 1626 of Marcello Sacchetti.

The word “scandalous” prompts a little smile on our lips nowadays What induces us to further reflection however is the comment made by Anna Coliva upon her return to Rome with all her treasures safe and sound: “The visiting public were highly enthusiastic when they came into our stand and, above all, few of the public knew it very well and many did not know it at all. We are Italy-centred. We take for granted that everyone knows us”. The Galleria Borghese ended 2016 with 528,000 visitors. This is hardly a low number of visitors for a museum that keeps works by the likes of Antonello da Messina, Raphael, Caravaggio and Lucas Cranach The Elder. And yet, continues the Gallery’s Director, “our magnificent museums are not easy to handle and use correctly and since they are often clogged up in a bureaucratic atmosphere they lack dynamism”. So what is actually lacking? “They are not trendy when compared to institutions such as the Louvre or the Metropolitan”.
The key word then is dynamism combined with the ability to astound and renew. These two concepts are indeed joined at the forthcoming International Biennale of Antiques held in Florence at Palazzo Corsini from September 23rd to October 1st. The event will be a tribute to the traditions and to the opulence of the past and the exhibitors have for years represented the Elite of this particular sector. Now, however, something has changed and the need to renew has started happening. An example? The presence of contemporary “art stars” has emerged – stars who are able to turn the event into something glamorous and wholly unmissable. This thirtieth edition will benefit from the presence of an exceptional testimonial, the Swiss artist Urs Fischer who will be exhibiting his works around the city. Even though the project is top secret, the curator will be Francesco Bonami : the friend of artists such as Damien Hirst, Jeff Koons and, naturally, the Italian celebrity, Maurizio Cattelan.

The air of renewal will also be involving the exhibition settings of Palazzo Corsini which this year will no longer be entrusted to Pier Luigi Pizzi but to the Venetian interior and wedding designer, Matteo Corvino.
This change came about two years ago when, Fabrizio Moretti, secretary of the historical and, especially, traditional event decided to turn over a new leaf and, along with the Mayor, Dario Nardella, President of the Biennale, they invited the “art star”, Jeff Koons, to exhibit his works in Florence. Even then, the idea of having a contemporary sculpture like “Pluto and Proserpina” in front of the Palazzo Vecchio was not popular with everybody, however, the neo-pop presence of one of the highest-paid artists in the world paid a valid contribution to all the media hype. So, all that’s left to be said is: be amazed by all of this, just do not be shocked, please!