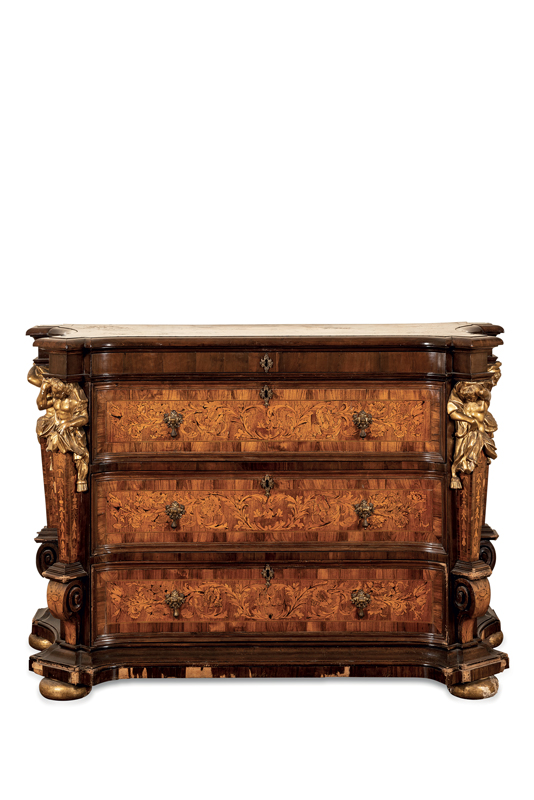 The splendour of beauty and the pleasure of display are elements that unite two capitals of the classical and modern world: Rome and Paris. For thousands of years, Rome has been the Caput Mundi of the Roman Empire and Christianity, while Paris was the city of the Sun King and Napoleon, the centre of the Enlightenment and Neoclassical Arcadia. Baroque artistry was born and nurtured in the Roman patrician and ecclesiastical aristocracy between 1650 and the middle of the following century, and was characterised by an overwhelming imagination and mastery of execution, where matter flexed to the artist’s fancy. A beautiful wall console in carved, lacquered and gilded wood with a top veneered in brocatelle marble from Spain, flowering alabaster and lapis lazuli decorated with fantastic masks and floral vines, and a splendid chest of drawers veneered in various woods with the figures of telamons carved and gilded on the sides, and the mixtilinear top decorated with a hunting scene with mother-of-pearl, ivory and silver-plated metal inserts, can be dated to this period. At the turn of the seventeenth and eighteenth centuries, a flap chest of drawers with a display cabinet and a square mirror, both in carved, lacquered and gilded wood, from the Papal States. From the collection of film producer Goffredo Lombardo, a veneered sideboard and a mahogany feather secretàire, stamped by Jacob Desmalter Rue Meslée and a large Louis XIV style box, in ebonised wood, gilded bronze, various marbles and stones, with bronzes in the manner of André-Charles Boulle, famous for being Louis XIV’s cabinetmaker. The Jacob Desmalter Rue Meslée stamp is used by François-Honoré-Georges et Georges Jacob from 1803 to 1813, two brothers from the greatest dynasty of French cabinetmakers, Napoleon’s favourite in these years.