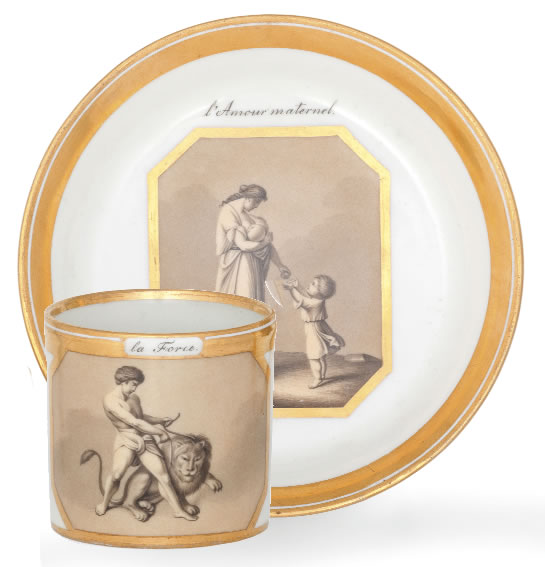 The sale sessions on 24 and 25 November, which will be held in the Genoese rooms of Wannenes Casa d’Aste, will also feature a small selection of majolica and porcelain, which will be sold in the session on the afternoon of 24 November. The porcelain constitutes the main part and include the second part of Giorgio Gianoli’s collection of cups and beakers. The first part of the collection was presented last September, with excellent results. It consisted of French productions, mostly from Paris, a series of small ceramics of high quality. The part of the collection presented in the next catalogue includes examples from German manufacturers, but one of the most interesting objects is certainly an English porcelain, the beautiful cup and plate made in Worcester in the middle of the 19th century and decorated with a bird’s eye view of London over the Thames, a particularly effective version of Anglo-Saxon topographic decoration. As far as German items are concerned, the cup and plate is decorated with an elegant Allegory of Hope, from the kilns of the little-known Schlaggenwald factory. In the first decades of the 19th century, this manufactory became famous for its late neoclassical pieces, often inspired by the Vienna manufactory. From the imperial manufactory, the collection features a beautiful piece dated 1809 and decorated with the allegorical figures of Strength and Maternal Love, an emblematic example of the technical level reached by the manufactory in the Empire period. Among the other lots in the sale there are two big potiches in polychrome porcelain of Imari taste: made in the French Samson factory at the end of the 19th century, the potiches are of great decorative impact and high quality, typical of the technical and artistic level reached by the factory in the decades between the 19th and the 20th century.