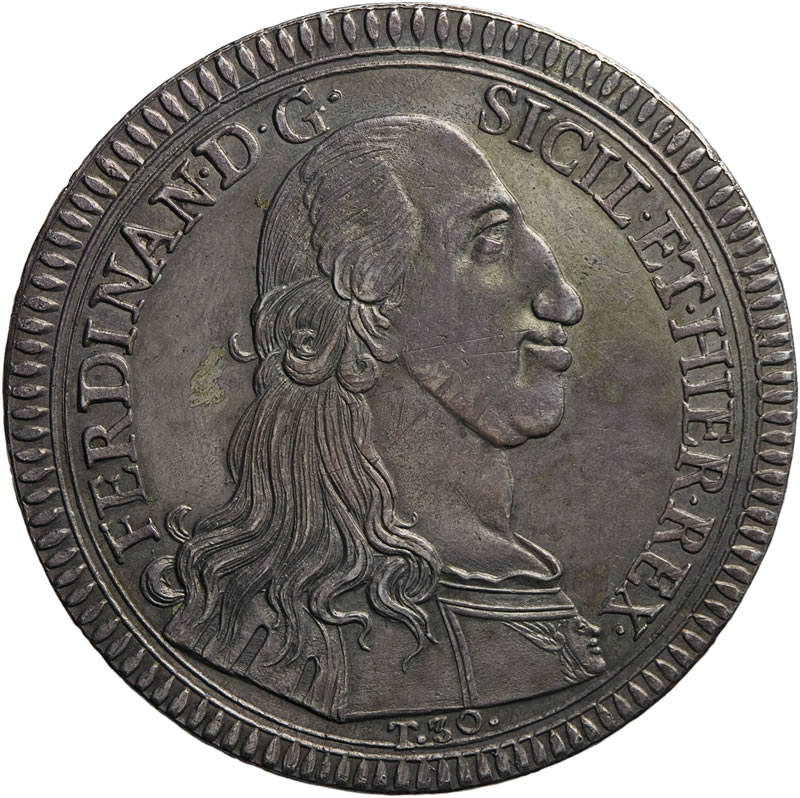 Besides many modern and ancient examples, the next Coins & Medals catalogue of 28 November includes a particularly charming item: the silver 30-tarì coin of Charles III. Charles VI, Holy Roman Emperor from 1711 to 1740 (who will be the father of Maria Theresa), ruled in Sicily from 1720 to 1734 under the name of Charles III. During his reign, he promoted the transformation of the Sicilian coin system, trying to adopt both the foreign and local currency values. In 1732, a new coin system was thus introduced: it also included one-ounce gold and silver coins portraying a phoenix rising up from flames, facing the sun.
“The Ounce coin, which was long considered the ideal coin, rose from its ashes just like the fabulous Phoenix”: this is the reason behind Gabriele Lancillotto Castelli’s iconographic choice. He was the Prince of Torremuzza as well as the Marquis of Motta d’Affermo. He was a fine connoisseur of numismatics, an antique dealer as well as the director of Palermo Mint.
The Phoenix, the mythological bird that rises from its ashes after its death (and, for this reason, associated to Christ’s resurrection) was thus represented on the coins minted in Sicily as the symbol of the renewed and powerful imperial eagle. It also symbolised the significance of the political project linked to the issuing of the coins, which represented the old gold 30-tarì coin of account. This also explains the writing on the silver coin that states, “Out f gold, silver rises again”.
The auction that will take place on 28 November will also include the ounce coins of Ferdinand III: the coin dated 1792, which portrays the long-haired King wearing the chestplate. The coin dated 1793, on the other hand, beautifully portrays the phoenix rising up from the flames, with the rare depiction of a front-facing humanised sun.
The catalogues’ lots also include a remarkable series of Savoy coins from the Kingdom of Sardinia to the Kingdom of Italy. A rare 100 lire coin, Umberto I, stands out. Only 145 of such coins were minted.