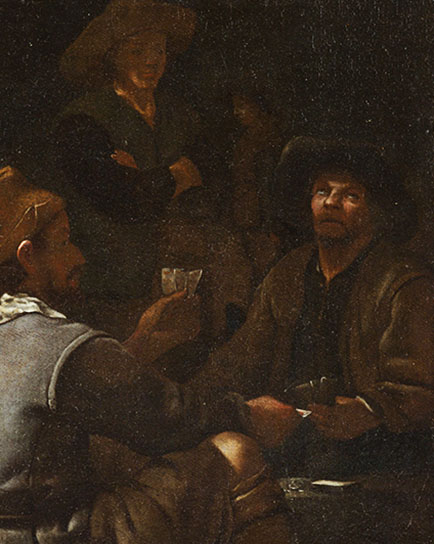 Caravaggio’s influence in the Seventeenth century is like the birth of a great river that originates from a pure and uncontaminated source. Its flow becomes larger and larger, welcoming and changing with the approach of the new phases of painting. With Caravaggio, the foggy and atmospheric Lombard naturalism, influenced by northern and Leonardesque traits, changes into a subtle exercise in sentimental phenomenology. An extremely deep and unrepeatable journey that, four hundred years after his death, remains intact in its overwhelming evocative force, so violent that the same contemporary etymology seems to begin with the light that builds the “form of reality”.
He did not have students or direct disciples but rather artists who, during the century, approached his tragic and inevitable realism.
Mattia Preti (Taverna 1613 – Malta 1699) is a late Caravaggesque, as Roberto Longhi said. His spirit brings him closer to the Lombard master, especially towards the end. His training, however, which started in his native Calabria, is dotted with countless stages – still to be confirmed apart from Venice – which took him, according to his biographer Dominici, to Bologna, Cento near Guercino, Venice, Milan, Genoa, Paris, Antwerp to meet Rubens and, finally, Spain following a mysterious monsignor, identified by some as Giulio Rospigliosi, the future Pope Clement X.
When he got to Rome, he was attracted by the Manfrediana methodus. In particular, in the wake of Valentin de Boulogne, Nicolas Tournier and Nicolas Reigner, he interpreted Caravaggio with decidedly Emilian influences. The lighting sensibility of his paintings, however, were decidedly Nordic if one considers the optical clarity that is typical of that pictorial tradition. The “Studio di nudo” that will be presented in the next auction devoted to Ancient Paintings of 29 November, and dating back to the 1940s, clearly shows Giovanni Lanfranco’s Emilian influences and Battistello Caracciolo’s Neopolitan ones with an extremely original interpretation. In the “Giocatori di bari”, attributed to Michiel Sweerts (Brussels 1618 – Goa 1664), the artist develops the topic of the Flemish “Bamboccianti” in Rome with a style that is severe and composed at the same time, quite similar to that ‘form of reality’ that had characterised Caravaggio’s works.