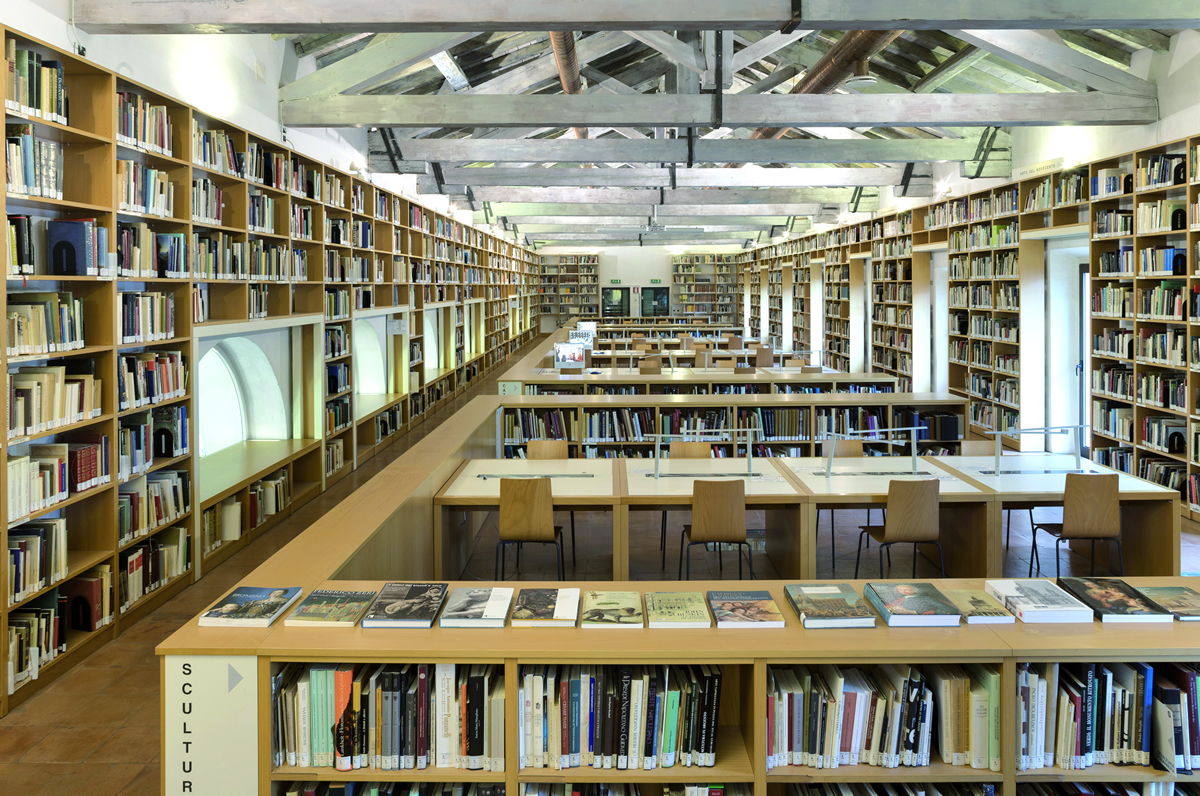 The look of a connoisseur – Fondazione Zeri

The Federico Zeri Foundation has just reached its 20th birthday, having been set up at the behest of Bologna University in September 1999, less than one year after the great Roman scholar passed away. From the outset the Foundation’s brief has been to preserve, publicize and enhance his legacy, especially those tools of the trade of an outstanding connoisseur, the library and above all the photo archive. Born in 1921, Zeri studied at Rome University under Pietro Toesca, and then went into the Fine Arts side of Public Administration, becoming Director of the Rome Galleria Spada in 1948. However, in the early Fifties he took the bold step of quitting that career and going freelance. This removed all conflict from his boundless curiosity for the art market where he brought to bear a rare moral rigour. By then he had already met those who would shape his development as a scholar: Bernard Berenson (1865-1959) and Roberto Longhi (1890-1970), who both lived in villas on the hills outside Florence at the time. Contact with these already almost legendary connoisseurs prompted Zeri’s decision to take the course we have described, far from both public administration and academe. (Longhi, we know, had been a university professor, first at Bologna and then at Florence.) At that time such a pursuit meant incessant, daily, contact with photographs. Whereas connoisseurs from the previous generations – Giovanni Morelli (1816 – 1891) or Giovanni Battista Cavalcaselle (1819 – 1897) – had perforce been indefatigable travellers, things had partly changed from Berenson’s day onward. “BB”, as he was nicknamed, always maintained that art history was a game where the winner had the most photos. Hence the creation of some extraordinary private photo archives. In a poignant passage from a 1987 article, Zeri recalled his own second formative stage with Longhi, after the academic grounding under Toesca: “Today, as I limp around with arthritis, my mind goes back to the times I slogged back to Via Fortini from Florence station carrying two suitcases bulging with photos by the hundred (over which we poured long days, arguing and researching), and I can only say it is a sad business growing old.” At the time he was writing, I too was regularly trekking from Rome station to Mentana (25 kilometres outside the City), though without humping suitcases full of photographs; for these last – possibly the very ones that had been through Zeri’s and Longhi’s hands so many years before – awaited me at the villa where Zeri had retired after a lifetime of travelling, back and forth to America above all. At Mentana he had enough room to house his by now exeptional library of books and photos. My own training was under a pupil of Longhi’s, Carlo Volpe, at the University of Bologna; it was with Bologna – and with Anna Ottani Cavina especially – that Zeri forged those close ties of trust that led to the Alma Mater awarding him an honorary degree in February 1998. That strong and lasting bond prompted Zeri’s decision to leave Bologna University his cultural legacy, as well as the Mentana property with its precious collection of inscriptions adorning the garden walls.

Our Foundation is still in its youth. From 2001 to 2014 it was Anna Ottani Cavina who directed it, and from her I took over. This short score of years has been packed with activity, though. The first target was to provide a worthy home for Zeri’s bequest. The library of 46,000 art history books and 37,000 auction catalogues, along with the art photo archive of 290,000 photos, was gradually made available for study at the Foundation premises in the renaissance convent of Santa Cristina which also houses the university Department of Arts. Together, the two institutes today form a scientific hub of the first international scientific order for art history studies. 2008 saw the doors opened to the public. The whole book collection had been catalogued and may be consulted under the OPAC system of the National Library Service. In the process it has emerged that 60% of the books Zeri owned are not to be found in the catalogue of the Bologna Library network, while 20% are not in any SBN-catalogued Italian library. What was so precious and complete was the stock of auction catalogues that Zeri regularly received from the main international houses (Christie’s and Sotheby’s especially): these, as much as the photos, were the real daily bread of a connoisseur like Zeri who often made his annotations straight onto the catalogue. They thus become a repository of knowledge directly dialoguing with the photographs which in turn – and to an even greater extent – bear his precious comments on their backs.

The photo archive must be deemed the Foundation’s chief treasure. To date, over 170,000 photographs have been catalogued, covering works of Italian painting and sculpture from the 13th to the 20th century, most of them consultable on-line on the Foundation website. Ours is an age in which we are accustomed to hunt up images at an effortless speed unimaginable in Zeri’s day. We might paraphrase Berenson and say that art history has to some extent become a game where the winner is the most adroit at retrieving, comparing and cross-referencing images without getting lost on the web. The Foundation database is a sophisticated yet agile tool affording research findings under many different headings (author, location, dating, subject, photographic data, and so on). Scholars nowadays consider the Zeri Photo Archive the most complete and reliable online catalogue of Italian painting present on the web. It is consulted by teachers, students, antiquarians, auction houses and collectors, and hence indeed continues to play the research and dissemination role that Zeri intended for it. It is also a precious source of information safeguarding the national art heritage, as well as a point of reference for the Carabiniere Unit for art heritage protection who often contact us.

No doubt thanks to the unusual degree of visibility that the Zeri Photo Archive rapidly achieved by going on line and upgrading so much of its endowment, it has attracted some outstanding donations, each of them testifying to the institute’s vitality, that of Zeri’s bequest and the niche it has found for itself in its Bologna location. In 2009 it acquired the photographic archive (11,247 photos) of Stefano Tumidei who taught at Bologna University and was a prominent figure in the early Foundation years (he worked with me on setting up the cataloguing project). Tumidei died prematurely on 9th May 2008. Recent years have seen some other important acquisitions. In 2017 Everett Fahy – maybe one of the last great connoisseurs brought up under the model that Federico Zeri so perfectly embodied – made over to our Foundation his photo archive of 40,800 photographs and an equal amount of hard copy documentation – items of key importance above all to scholars of the Florentine Quattrocento.

In 2008 a group of Friends of Federico Zeri was set up – collectors, antiquarians, entrepreneurs – who embrace the research goals of the Foundation and support its activities.
Zerri had offered his talents as a connoisseur to the United States above all, being a visiting professor to Harvard University and New York’s Columbia University. He was also a consultant to the Metropolitan Museum of New York, and the only European among the trustees of the J. Paul Getty Museum of Los Angeles. The Foundation has kept alive this international vocation: drawing on the exceptional reputation of its photo archive, it has engaged in collaboration with major Institutions such as the Getty Research Institute, The Samuel Kress Foundation, l’Institut National d’Histoire de l’Art (INHA) in Paris and the Kunsthistorisches Institut of Florence, and others besides.

Ever since 2012 it has been part of a consortium of 14 leading photograph archives in the world of art history documentation. The goal of this body is to set up a common platform linking the digital resources of the individual institutes, and thus become a fundamental research tool for the entire art history community. Within that consortium the Zeri Foundation, along with four other institutions (the Biblioteca Hertziana, Bildarchiv Foto Marburg, Fototeca Berenson and Frick Art Reference Library) has embarked on a pilot project backed by generous funding from the Mellon Foundation. In recent months a special team of digital humanists has been visiting the five archives to analyse and harvest images and data which will form the nucleus of such a platform.

Alongside these major ventures, ever since 2004 the Foundation has been conducting a specialist training programme in art history designed for students and junior scholars. It consists of courses and seminars run by Italian and foreign teachers. Proceedings of these have in many cases been published. Some have focused on management, cataloguing and enhancement of photo archives; others on the branch of studies that Zeri was himself a master of, connoisseurship, entailing in-depth familiarization with precursors from Vasari down to modern times. Since 2015 the Foundation has also been running a publication series entitled “Nuovi diari di lavoro” (borrowing from Zeri’s own Diari di lavoro) which gathers research produced within the institute or proceedings of seminars on topics that Zeri had covered.

Federico Zeri was not only a great connoisseur and art historian, but an outstanding communicator. He wrote brilliant journalistic pieces, and increasingly appeared on television in his later years. Dissemination of knowledge, what is nowadays called the ‘third mission’, is something the Foundation sets great store by, putting on regular lectures, exhibitions and book presentations, as well as using its own youtube channel to record the ventures organised here in Santa Cristina.

Our Foundation activities have always been generously supported, above all by the University of Bologna. They have both broadened in scope and intensified, while remaining faithful to the objectives made clear from the outset. Zeri himself never taught at an Italian university, though he loved to transmit his own passion for learning and the methods of connoisseurship he had so long cultivated (I was not the only youthful scholar frequenting Villa Mentana in the Eighties). I like to think that he could not have hoped for a better outcome to the Library and Photo Archive he went on expanding down to the last days of his life.