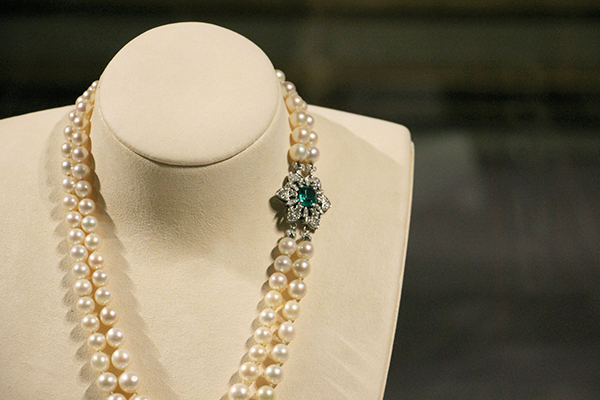 Detail of necklace of 101 natural pearls on two wires with closure in white gold and emerald, sold for 1,054,000 euros

The culture of being a part of things

In Spring 2016, Wannenes was behind two events that, it might be said, were proof of the auction house’s desire to be selective in the way it communicates its core values, original in the choices it makes and unique in the style it creates.
Christiane d’Albis, our Consultant in Venice, was hostess on March 19th, to a luncheon held at the Circolo dell’Unione in honour of Marcella Ansaldi and Alberto Craievich – curators of the exhibition “Geminiano Cozzi and his Porcelain” held until September 26th 2016 at Ca’ Rezzonico, in the Museum of Eighteenth Century Venetian Arts – and the most important international experts of porcelain who had been invited to the inauguration of this highly significant exhibition. The exhibition gathered together over six hundred pieces of porcelain from a whole host of Italian and foreign museums. Their story was told in chronological order and according to theme and it illustrated the evolution of the Cozzi Manufactory and the types of decoration used on a wide variety of different pieces. On one hand, the exhibition highlighted one of the most fascinating, in historical and artistic terms, moments of the Eighteenth century and, on the other hand, the exhibition opened a window onto one of that century’s most significant manufacturing activities – activities that were so often imbued with episodes of surprising modernity. In a preview in Turin on May 12th 2016, in collaboration with the Banca Patrimoni Sella & C., and with the participation of Credit Suisse Asset Management, some of the most important pieces from the Spring sales at Wannenes were presented in the sumptuous rooms of Palazzo Bricherasio,hosted by Chiara Benevolo Caroni, our Turin representative. Built in 1636, the palazzo belonged to a string of important families through the centuries who all contributed to its enlargement and decoration. The Fondazione Palazzo Bricherasio was set up in the 1990’s to promote cultural events and organise modern and contemporary art exhibitions. In 2010, the palazzo was purchased by the Banca Patrimoni Sella & C.