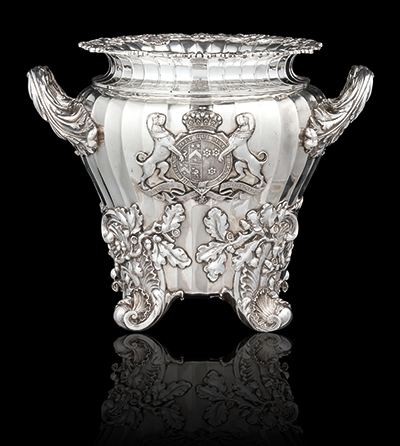 Paul Storr was a master of English silverware in the Eighteenth and Nineteenth centuries and created silver objects that became from their very beginning icons dedicated to the glory and the might of the British Empire. Storr was born in London in 1771. In 1796, he opened a workshop in Air Street, in Piccadilly, and it was here that he produced the first important pieces of his lengthy career. From 1803, Storr worked with Philip Rundell (1743-1827), one of the period’s most famous silversmiths with whom he went into a profitable partnership that would last twenty years long. From 1826, Storr worked with John Samuel Hunt, his wife’s nephew, in his prestigious headquarters at 13, New Bond Street that were under the directorship of John Mortimer. Both the silver pieces as well as the fame of Paul Storr and John Samuel Hunt reached their greatest degree of splendour at the beginning of the Nineteenth century as a reaction against the cool and measured style of English Neoclassicism. Their works were so exuberant in their decorative style that they were reminiscent of the Rococo and the floral and vegetable elements of the Eclectic period. They also represented, however, sensuous references to Classicism that were skilfully executed in the most decorative of styles. These works were fine examples of an imagination that was as exquisite as it was flexible in that it would be able to celebrate the feats of the middle classes that had become established with the Industrial Revolution.
One fine example of such imagination may be found in the four silver wine coolers made in 1817 with the coat of arms of Charles Chetwynd-Talbot, the second Earl Talbot (1777-1849) and his wife, Frances, the daughter of Charles Lambert. The second Earl, who enjoyed an important political role during the reigns of the last Hanover kings completed his studies at Christ Church in Oxford before going to the British Embassy in Russia under Lord Whitworth. In 1812, he was nominated the Lord Lieutenant of Ireland and the Lord Lieutenant of Staffordshire (a position he held up to his death) and in 1821 he gained the knighthood of Saint Patrick. In 1844, he was made a Garter Knight as may be seen in two of these wine coolers.