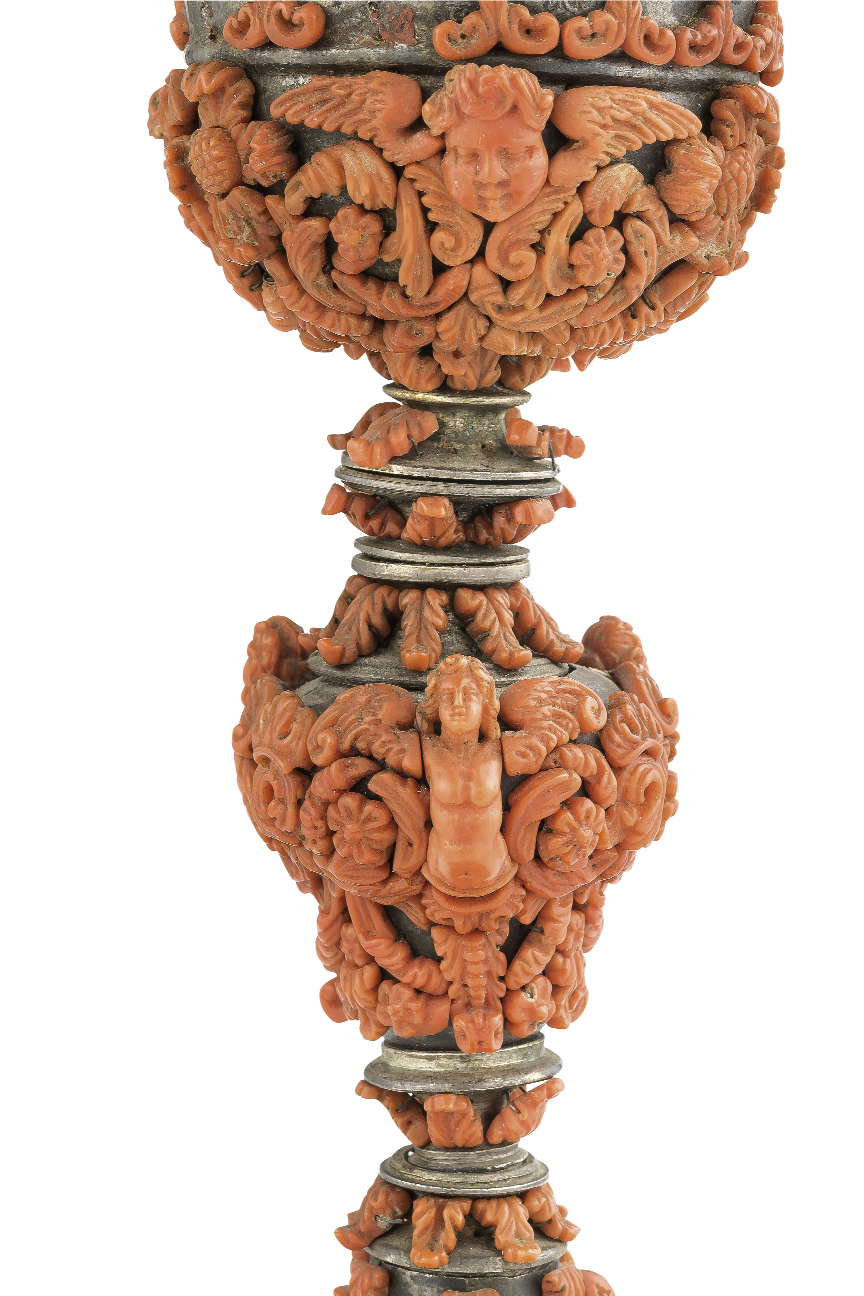 The complex nature of coral

Coral has a polymorphic and metamorphic nature, poised between the three kingdoms: not mineral even if petrified, not vegetal even if branched, not animal even if of the colour of blood. With the spread of Christian thought, coral becomes the symbol of the blood of the Redeemer. So, decorating monstrances and chalices with coral meant accentuating their function as sacred containers of the Saviour.
The oldest processing of coral in Trapani was characterised by the production of large coral grains. In the fifteenth century, the processing of coral was carried out by Jewish craftsmen and about fifty Christian coral masters. They organised themselves in a consulate, and then in a masterly manner in 1555. The oldest capitals of the workforce of 1628-1633 included both simple coral masters and coral sculptors.

However, a significant impulse was offered to the art of coral in the sixteenth century by the new method of working with the burin introduced by Antonio Ciminello. This allowed the creation of sculptures with refined technical expertise and remarkable aesthetic perfection, despite tiny in size.
The Trapani working of coral is shown in its most characteristic forms in the realisation of those precious compositions where gilded copper is combined with coral. The most ancient technique is called back-inserting. It consists in inserting small elements of polished coral into the copper. Fixed with black pitch, wax and some with canvas. The work on the back was then finished with another sheet of gilded copper preciously decorated with engraving.
Another characteristic are the enamels that surround the works and in particular the white ones that reveal the golden metals.

With this technique, it is possible to create various types of objects, from trays to boxes and plates.
The art of the Trapani masters of coral is not a closed art in itself, but attentive to the culture that reaches not only Trapani but also the rest of the island from many parts. The coral masters often worked in collaboration with bronzes, goldsmiths and silversmiths, exchanging experiences.
The larger branches of coral were used to symbolise the cross of Christ’s martyrdom. Coral was used to adorn chalices, monstrances and pyxes, sacred containers.

After the baroque explosion, the technical possibilities and the consolidated experience of the artists were changing. The types and subjects of the works changed, but also the techniques and materials used. The technique of sewing with metal threads and pins the individual floral and curvilinear coral motifs takes over. The polymeric taste brought to the realisation of complex and articulated compositions that combine coral with precious materials, creating works of a showy decorative exuberance, much sought after, and original.