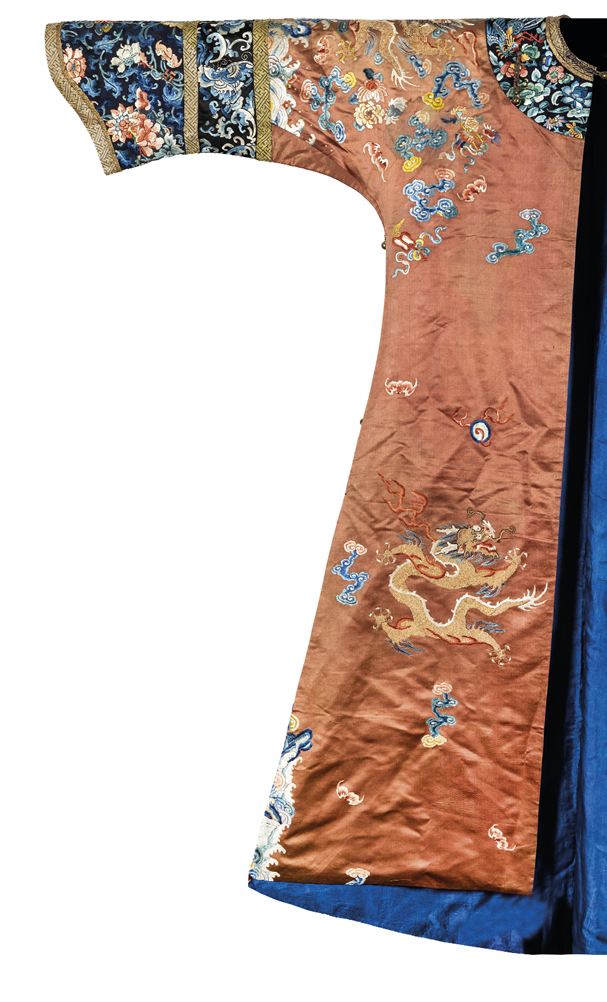 On the one hand, we usually say that “you should never judge a book by its cover”, in China this has always been the case. Since the most ancient Dynasties, in fact, the colour and the embroidered symbolism of clothes distinguished the social and military ranks. During the reign of Emperor Qianlong (1736-1795), of the Qing Dynasty, an official document regulated the dress code of the Palace.

The former were worn in the most important ceremonies such as ascension to the throne, birthdays, weddings or sacrificial ceremonies. The second ones, called “Dragon Robe”, were worn by all those who were part of the court or served the emperor in official undertakings.

Women used to wear different clothes on formal and informal events. In the latter case, there were two main types of clothes: Changyi with a relatively straight panel crossing from left to right, and Chenyi with a slit on each side, allowing ease of movement.

According to symbolism, the dragon stands out as an imperial symbol. It chases the fiery pearl (symbol of wisdom) and has five claws if worn by the emperor. If worn by the courtiers, the claws were four or three.
On the dress, there were nine dragons, five of which were visible from the front and the back because 5 and 9 were numbers associated with the dignity of the throne.

The “Twelve Symbols” were reserved for the formal clothing of the emperor. The symbols of Buddhism, Taoism, flowers, plants, characters and animals were chosen according to the clothes.
The embroideries with coloured silk threads, gold or silver threads embroidered with various techniques on simple silk, satin, damask or gauze depending on the seasons and functions. The colours indicated the status of the five ranks in the form of the five elements of the universe:
Blue (East/wood) for the nobles. White (West/Metal) associated with mourning. Black (North/water) for the lowest rank. Red (South/fire) for marriage and birth rituals. Yellow (centre/earth) reserved for the emperor as he was considered the centre of power.

Other members of the imperial family wore various shades of yellow/orange, being close to the centre of power. The emperor’s informal dress was often reddish brown, grey or blue. Green and pink were specific to women.
The next auction on November 26, 2019, will present three dresses, a rare hat and four court bags from the private collection of Counts Zavagli Ricciardelli and Barons Di Brocchetti. Starting from the nineteenth century, they held high political positions and were part of the Italian Royal Navy, living in the East (Japan and China until the beginning of the twentieth century), according to the diplomatic and military custom handed down to the heirs.