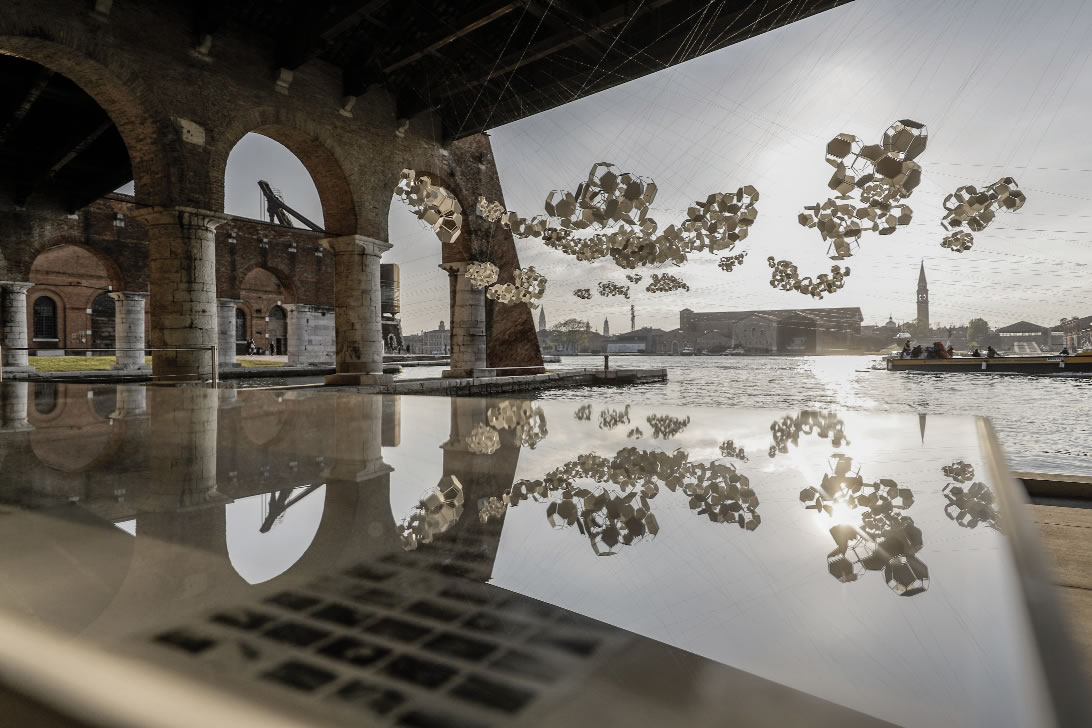 In its early years, La Biennale di Venezia followed a strict set of guidelines imposed by those ‘in charge’. Indeed, this approach married well with the system of consensus on which the new institution was built. It is well known by now that La Biennale was governed with a conservative spirit for many years and that the steadfast opinions of its General Secretary (the legendary Antonio Fradeletto) appeased those who feared bumps in the road or innovative excess. […] La Biennale di Venezia was founded in 1893 and held its first Exhibition in 1895. Its first foray into the art world was guided by a theatrical, dishevelled and progressive mayor who was followed by a conservative, clerical mayor, still a staunch biennalista himself, supported by leading Venetian figures and a large group of local Venetian artists. Indeed, they had a set of shared objectives: to enhance the city, a glorious city that needed to secure its future at a time of uncertainty, as an asset by putting it out there in a direct challenge vis-à-vis the world. […]
La Biennale, having established its intent to promote its ‘international’ flair from the very beginning included in its charter the second pillar of this edifice: a selection that was open to anyone, based on the decision of an admissions jury. […]
The Exhibition was thus composed of artists who had been specifically invited to the event and entrants who had been admitted by the selection jury, resulting in a dualism that ultimately characterized the spirit of the Biennale for many years to come, until 1956. […]
The Institution opened a sales office, aiming to also use the international art event as a tool for promoting artists on the somewhat limited market of the time. With these choices, the Exhibition had become a point of reference for artists, also as a category of professionals, with considerable influence on later developments (presence of artist union reprsentatives on committees and pressure to increase invitee numbers). […]
During those years, the Biennale tried its best to ‘circumnavigate’ France. This was because the number one enemy was Impressionism, which the institution feared would corrupt the latest generation of Italian artists. The same treatment would later be reserved for Expressionism[…]
Symbolism, the transfiguration of the inner world into art, Esotericism, psychoanalysis and mythology were supposed to influence Italian artists in depicting landscapes, domestic scenes of interiors, masks and the human figure. […]
The very first Bienniale took place in 1895, just three years after the Munich Sezession and respectively two and three years before the Viennese and Berlin movements. Despite not necessarily embracing the spirit of avant-garde movements, all of the above questioned an academic approach and attempted to breathe life into national modern art. In many cases, they did so by adopting a multidisciplinary approach that included groups such as the Arts and Crafts movement. […]
La Biennale’s anxious desire to control artistic approaches became greater, still at a local level, when the event’s first major guarantors disappeared in 1920 (the mayor and General Secretary). Vittorio Pica, a leading figure in the art world, was appointed General Secretary and geared up to embrace a new, more courageous approach. Indeed, it was his idea to include the Impressionists and African art in the Exhibition, despite the immediate appointment of a committee of seven (and later thirteen) members tasked with supervising his choices. […]
Antonio Maraini took the chair as General Secretary in 1928 (later becoming head of the Fascist Union of Artists) and the committee was downsized and then abolished. However, this time, conflicts with the President and city mayor (Ettore Zorzi), who insisted on personally choosing the artists himself, were truly disastrous. As a result of said conflict, Maraini succeeded in obtaining the approval of a law in 1930 that transformed La Biennale from a locally promoted institution into a state institution. This transformation fed into a more comprehensive overhaul that saw greater state commitment and also involved the Milan Triennale and Rome Quadriennale. Maraini remained Secretary while the President was replaced by a former minister: Giuseppe Volpi, Count of Misurata. […]
Indeed, La Biennale was viewed as a means of propping up a propaganda machine that glorified Italy’s image as a new, open and young nation, opposed to the punitive outcomes of the First World War. It was also viewed as revisionist of the loathed treaties imposed after the end of the war. […]
It was within this context that the Biennale expanded its remit to include cinema, theatre and music, thanks to the 1930 law that permitted these activities. 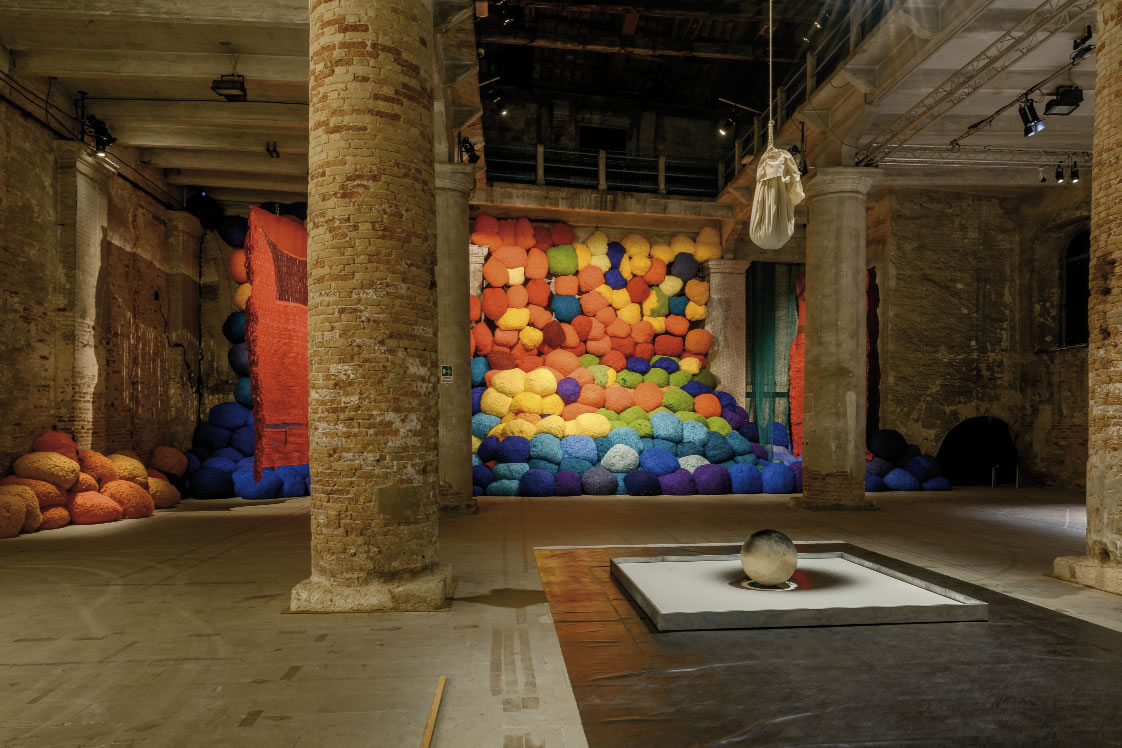 The Second Post-War Period
After the Second World War, La Biennale di Venezia took its premises back and organised the first International Art Exhibition in 1948 (the first International Film Festival had already taken place in 1946). The organisers ultimately decided to focus on a sense of continuity, rather to make a break with the past. While the task of organising the Biennale was entrusted to a commissioner, curation of the exhibition itself was delegated to a committee of experts composed of ‘well-known’ critics and artists, with the latter also acting as trade union representatives. […]
The exhibition’s prevailing focus became New Abstractionism, Informalism and primarily, as previously mentioned, Action Painting. […]
And so, America brought Pop Art and New Realism (Nouveau Réalisme) to the Biennale, an act that was somewhat favoured by political interests (promotion of the Atlantic Alliance). Although it resulted ina number of disputes and political concerns, the Biennale already free from the nationalism that had plagued the fascist era, now could overcome its exclusive references to Europe: it became global, at least, as far as global meant at the time.
The disruptive nature of the 1964 edition was followed by great calm in 1966, while the 1968 edition was somewhat unique in its rejection of ongoing discussions to table a political issue: the role of the institution and its survival. […]
The 1968 edition was influential not only due to the disruption that took place, but also due to its bearing on the contents of subsequent editions. The 1970 edition was dedicated to artistic experimentation and to art as a productive activity and to visitor engagement rather than to the works of art themselves. The 1972 edition showcased graphic art, videos and architecture.
A representative and creative individual was appointed President of La Biennale and he viewed the reform as a momentous feat of ingenuity, as did many others at the time. In compliance with the 1973 law, representatives from local institutions were appointed to the board of directors whose nomination was a reflection of political representations.
Others were put forward by unions or ministries, resulting in a board that soon consisted of nineteen members (who were asked to attend a public meeting once a year). […]
Graphic art, videos, design and architecture made their entrance into the Exhibition in 1976, along with a number of themes and reflections on how these mediums related to cinema.
The Italian selection that same year was organised into themes relating to the relationship between art and the social environment, while an exhibition entrusted to Germano Celant dealt with the relationship between art and the environment. […]
In spite of the firm interest in architecture (as was evidenced by ‘La Presenza del Passato – La Strada Novissima’ exhibition, staged along the first seventy metres of the Corderie in the Arsenale) a new ‘Aperto’ section was launched at the Biennale in 1980, which included ‘new painting’ trends in Italy and Germany: the Transavanguardia movement and new German painters such as Baselitz, Kiefer, Polke and Richter who also dominated the Documenta 7 art exhibition in 1982, leading to it being showcased once again in the German pavilion. […]
Although the reform required the appointment of a department director, the Biennale proceeded in appointing individuals to work primarily as strategic organisers dedicated to taking care of a few of the exhibits.
They were still accompanied by committees, panels and (rarely) other curators who contributed once more to the creation of an ‘exhibition complex,’ i.e. a small archipelago of separate exhibitions. […]
The great Centennial Exhibition of 1995 was entrusted to a foreign curator for the first time since the foundation of the Biennale. He was nevertheless supported by expert committees and panels in his choice of Italian artists. The evocative approach of the exhibits was matched with the critical spirit of its curator (Jean Clair).
In an atmosphere of uncertainty and dispute in 1997, Germano Celant was appointed Director of the Visual Arts Department and curator of the 47th International Art Exhibition, and only his skills and experience ultimately resulted in the creation of a valuable exhibition despite him having been given just a few months’ notice. […]
After a period of gestation, the 1998 reform was finally enacted and this time, it was radical. As a matter of fact, it implied a refoundation from a bureaucratic body with its bloated committees influenced by political balancing acts – into a public institution governed by private law with a smaller board of directors and full decisional autonomy. […]
The Biennale the task of creating a unique, open and general international exhibition, while pavilions would host spontaneous contributions to the international dialogue. Without interference, they were free to follow the main theme if they so wished. […]
Whatever the theme or inspiration behind the choices made by each curator over the last twenty years (1999-2019) every exhibition has been inspired by this spirit and by an awareness of the importance of building relationships with visitors. […]
All these aims are all pursued according to an interpretation of the role of La Biennale as an instrument for the promotion of an open, free, and self-conscious society. 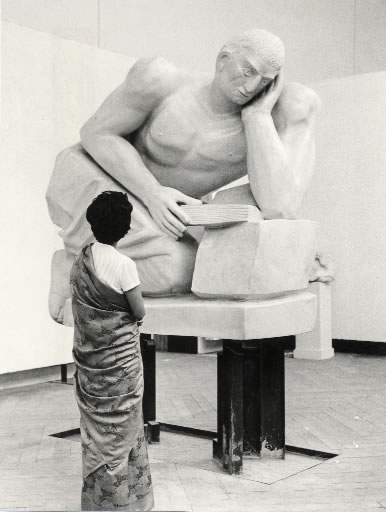