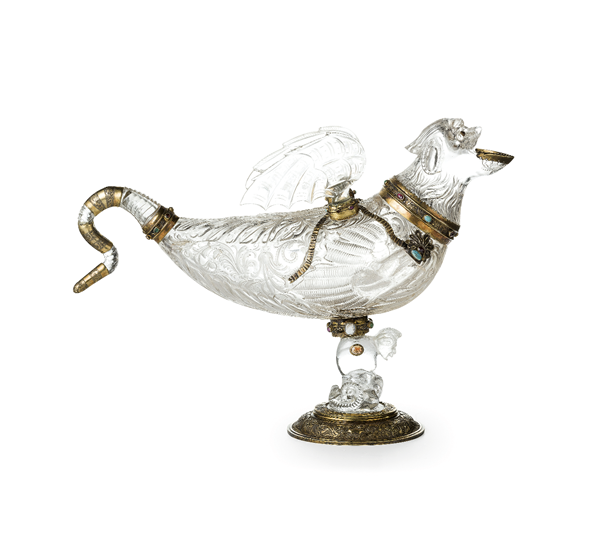 The results for the Department of Silver, Ivory, Icons and Russian Objets d’Art were very satisfying in the first semester of 2017. The auction on May 15th totalled 848,411 euro with an excellent percentage of 70.8% of lots sold and 95.1% of lots sold in terms of value.
The top lot was a jug in the shape of an imaginary animal in rock crystal with stones and cameos and mounted in gilt-metal. It dated from the 18th century and reached a hammer price of 39,680 euro. A pair of two-branched silver candlesticks by the silversmith, Paroletto in Turin, made in about 1780 was sold for 32,240 euro, whilst a centre-table in the shape of a winged lion in rock crystal, silver and enamel, from the 19th century, reached a total of 21,080 euro. Among the works in ivory in the sale was a family portrait from the 19th century by a French artist which reached a total hammer price of 14,880 euro and an ivory, coral and mother-of-pearl group from Italy depicting the Virgin with Child which was sold for 12,400 euro. Among the icons in the sale was a Guardian Angel with a riza in silver-gilt, created in St Petersburg between 1896 and 1908 by the goldsmith, Morozov, (bearing an Imperial stamp). It sold for 19,840 euro. Lastly, an elegant silver tea and coffee service with a tray, made in Moscow by the silversmith, Tarasov, between 1899 and 1908, was sold for 16,120 euro. 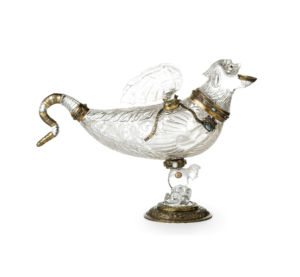