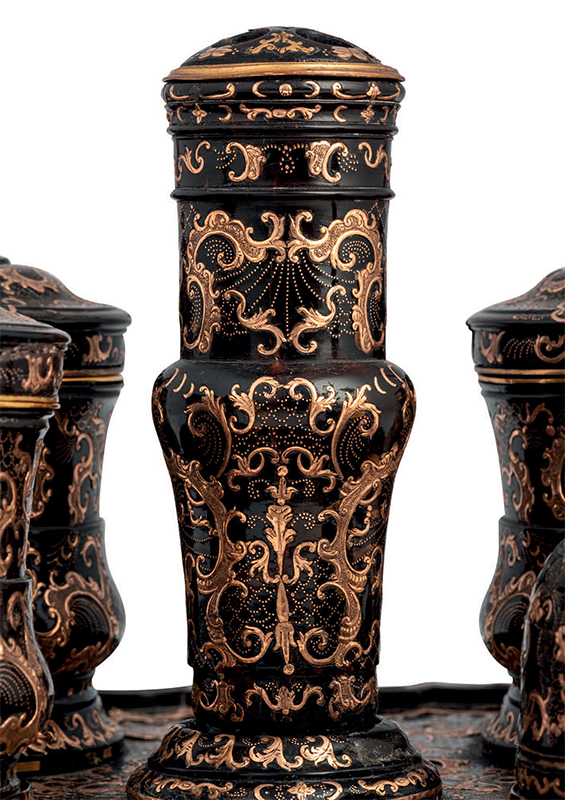 Naples is a wonder between turtle and piqué

The forthcoming auction of Silver, Ivory, Icons and Russian Works of Art will feature a precious and rare table inkwell in brown tortoiseshell and rich gilded bronze pique decorations, which create shell motifs and leaf arabesques on a textured ground. The inkwell includes a tray with wavy edges and compartments, with a feather holder in the centre, two inkwells, a powder box, and a bell. The tortoise, much coveted in antiquity, fell into oblivion until the Renaissance, when it was sought after throughout Europe. In the 17th century it made its entrance into furniture, alongside ebony, ivory, mother-of-pearl and semi-precious stones on cabinets. Initially applied to interior niches, tortoiseshell conquered the outside of furniture around 1640, and then covered it entirely ten years later. The amazing workmanship is attributed to the Neapolitan atelier of Giuseppe and Gennaro Sarao in the second half of the 18th century The technique used to make this fantastic piece of 18th-century Neapolitan goldsmith’s art is that of “encrusted piqué”, which consisted in heating the tortoiseshell to insert very fine motifs in gold, silver, bronze or mother-of-pearl. The technique originated in the 17th century thanks to a certain Laurenzini, and among the main ateliers of master cabinet-makers in Naples were those of Antonio de Laurentis, Nicolas de Turris, Nicolas de Starace and Giuseppe and Gennaro Sarao, father and son, active until 1777. To them we can attribute the creation of the inkwell, both for the technique of execution and for the refinement of its decorations.