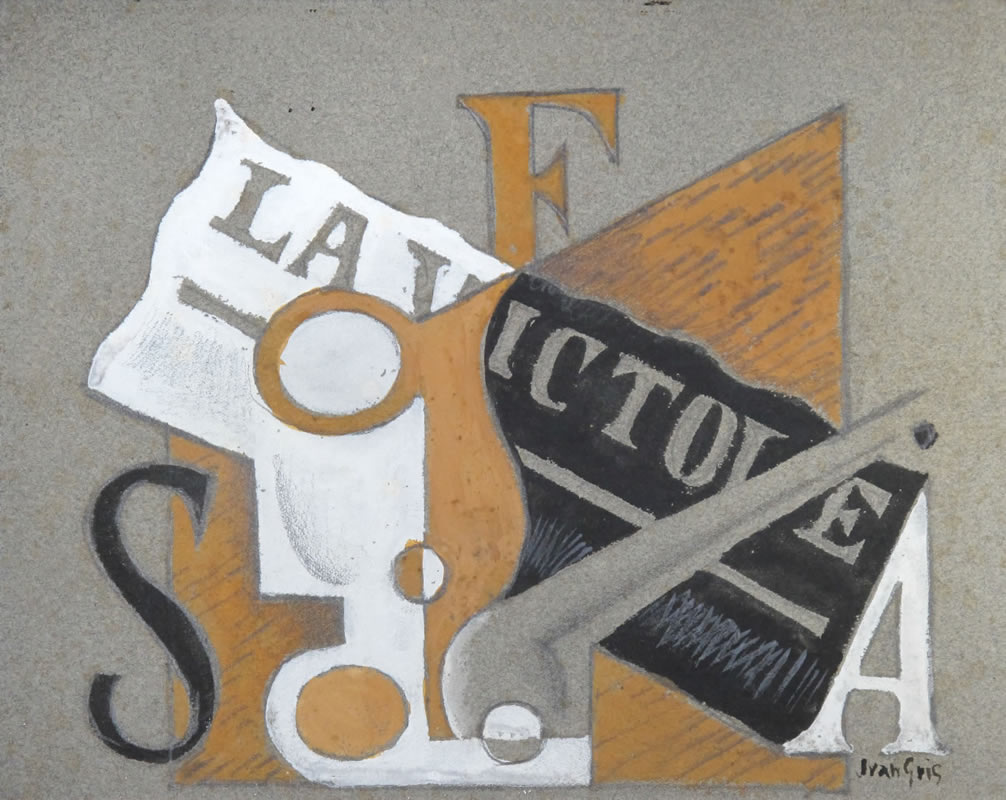 Juan Gris (Madrid, 1887-1927) made the gouache on paper Composizione in 1918 at the end of the ‘Great War’, when many significant events for the artistic and human life of the painter from Madrid took place.
He moved from Spain to France, in Paris, in September 1906 and was immediately assisted by his friend, the painter Daniel Vásquez Diaz who introduced him to the artistic environment of Montmartre – where he met Pablo Picasso, Guillaume Apollinaire, André Salmon and Max Jacob. Here, thanks to Picasso, he found a studio in the basement where his workshop was located, at the ‘Bateaux Lavoir ‘at no. 13 Place Ravignan.
Here, Gris lived and worked until 1909, moving during that year to a larger studio, also at the ‘Bateaux Lavoir’, left vacant by the painters Kees Van Dongen and Jacques Vaillant. The new studio, which had two windows and appeared in some of his works from 1915 and 1917, could also be accessed through a staircase from rue des Abesses.
When Gris arrived in Paris, he was nineteen years old. He had studied at the Escuela des Artes e Industrias in Madrid, in the class of the painter José Moreno Carbonero (Malaga, 1860 – 1942). He had aslo worked as a designer of ex libris and illustrations in modernist magazines such as “Renacimiento Latino”, “Blanco y Negro”, and had created covers and pages of poetry books by Ruben Dario and Angel Zarraga.
Thus, to ‘make ends meet’, even in Paris, from 1907 to 1911, he offered his drawings and illustrations to magazines such as “Le Rire”, “L’Assiette au Beurre”, “Le Cris de Paris”, and in Barcelona to the magazine “Papitu”, which published many of them.
In 1910, he also began to work on still life watercolours, portraits and self-portraits in pencil and ink and on his first oils, influenced by Cézanne and Braque.

Through his friendship with Max Jacob, he met the poet Pierre Reverdy, with whom he maintained a close and long relationship, as he did with Picasso, Braque, Archipenko and other painters and sculptors, who had long since embarked on the ‘Cubist’ adventure.
In 1911, he painted his first ‘Cubist’ paintings under their influence and participated in the exhibition at “Les Indipendentes” and the” “Salon d’Automne”.
The following year, he took part in some significant exhibitions, such as the one at the “Section d’Or”. In his works, he shared the Cubist structure that both Braque and Picasso had created. In 1912, he also had his first solo exhibition with fifteen paintings at Clovis Sagot’s gallery, whom he had met the year before thanks to Picasso. From that moment on, Juan Gris’s style flourished within an intensely dynamic environment, like that of the Ville Lumière, where painters such as Fernand Léger, Albert Gleizes, Jean Metzinger or Robert Delaunay, but also poets such as Vicente Huidobro, Jean Cocteau or writers and collectors from all over the world converged.
The Cubist ‘trinity’, identified in Picasso, Braque and Matisse, had already achieved significant results that had codified in a revolutionary way the new conception of a cognitive painting – like Cubism – no longer mimetic but aimed at giving reality, objects, figures and environments a multidimensional and simultaneous overall vision on the two-dimensional surface of the canvas. As early as 1907, Picasso, with Les Demoiselles d’Avignon, created the masterpiece that embodied his metabolic vision of art, introducing faces he borrowed from the masks of African wooden sculpture into a group of female nudes, reminiscent of the Cézannian style. Starting from 1912, this subversive contamination was followed by the introduction in his paintings of the collage technique, with the use of real newspaper fragments, therefore no longer merely depicted. 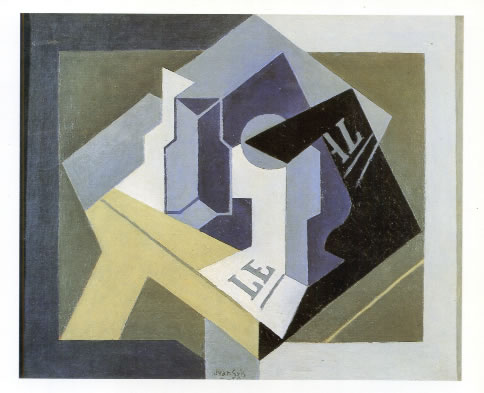 On the one hand, Gris followed the authoritative development of his friends’s style. With each of them, he had, at different times, an intense relationship with assiduous frequentation and confrontation. However, he also developed his own structure and a very original linguistic style. The diversity of his canvases, in fact, won him the attribution of “synthetic cubism” compared to the “analytical” one already affirmed by Picasso and Braque. Why were his painting different?

Gris organises and structures the painting as a rigorously geometric architecture, clearly identifying the objects “in order to avoid (…) that the set of coloured forms – he says – suggests an image different from the one he had planned”. In the design of the shapes, the planes, the objects, he tries to observe both purity and logical clarity. Therefore, Gris arranges the spatiality of the painting by defining diagonal, vertical and horizontal perspective chromatic zones in which he too frequently introduces collage. He wants to define his style rather than deal with form in the volumetric relationships of objects. In those same years, he affirms: “I consider that in painting the architectural element is its mathematical part, its abstract side. I want to humanise it. Cézanne starts from the bottle to arrive to the cylinder. I move from the cylinder and create a single, individual figure: I create a bottle – a particular bottle – starting from the cylinder. Cézanne tends to architecture. I tend to move away from it”. On the other hand, already in 1912 he had also declared: “I start by organising my painting, then, I qualify the objects. My aim is to create new objects that cannot be compared to any other object in reality”.
In the meantime, important museums started acquiring his works, such as the Staatsgalerie in Stuttgart, the Rijksmuseum Kröller Müller in Otterlo, the Art Institute in Chicago, MoMA in New York. Some of the major art dealers and gallery owners also started to show interest in his work. Picasso’s German art dealer Daniel-Henry Kahnweiler signed an exclusive contract with him at the beginning of 1913 and Guillaume Apollinaire dedicated him a chapter of his book Méditations Estétiques: Les peintres cubistes.
From February 1914, he frequently used collage in his paintings and gouaches, drawing entire texts from newspapers and periodicals to structure the composition. This practice, however, was interrupted in October. This experience gave life to a series of still lifes such as La jarra de cerveza; Botella y vaso; Violin y vaso; Vasos, tazas de te; Botella y pipa sobre la mesa; Vasos y periodico; Garrafa, vaso y paquete de tabaco; Frutero y garrafa. All now in prestigious museum collections in Germany, Switzerland, Holland, the United States, Ireland but also in private collections such as Acquavella Galleries Inc. in New York, the long-time owner of the famous El hombre en el café, 1914, one of the largest collage-based works by Gris, recently sold after years to The Leonard A. Lauder collection specialising in Cubism and largely exhibited in 2014-2015 in an exhibition at The Metropolitan Museum of Art in New York.
The outbreak of the war in August 1914 threw Gris into an anxious and depressive state. Being an emigrant, he was discriminated and started having financial difficulties. The help he received from his friends, including that of the writer Gertrude Stein and Matisse himself, was providential, also in view of the interruption of the collaboration contract with Kahnweiler who, in the meantime, left Paris to take refuge in Switzerland.
With Josette Herpin, whom he had met two years earlier and who would remain with Gris until his death, the painter moved from Paris to Collioure where he got in touch with Marquet and Matisse. He continued to write to Picasso who, meanwhile, moved to Avignon because of the war. An intense exchange of experiences with Matisse stimulated him to abandon the recursive use of collage and return entirely to oil painting. In this period he painted La botella de Banyuls; El racimo de uvas; La persiana and other “bodegones”.

The gouache on paper Composizione, 1918 (24 x 31.5 cm) is one of the works from the war period. On the occasion of the long-awaited return of this Cubist Master in Madrid, they were displayed in the personal exhibition dedicated to him more than fifty years after his death at the Salas Pablo Ruiz Picasso, from September to November 1985, by the Spanish Ministry of Culture. Like other works of the years 1917-1920, it marked the transition to more essential and classic lines and chromatic relationships fully achieved in his poetic tension which, as Apollinaire had said, “desired to paint nothing but materially pure forms”.
His work, in fact, shares with oils such as Vaso y garrafa, 1917, La botella de vino, 1918, Frutero y periodico, 1920, and la gouache Naturaleza muerta, 1919, present in that exhibition, numerous compositional aspects: from the structure of the planes to the tonal values of the colours, from object morphologies such as jugs, chalices, pipes and magazine headlines to the absence of any collage.
The internal consonances of the elements at stake in the composition are few, yet essential. First of all, the presence and sharing of the roundness and curves of the upper and lower edges of the containers, such as the chalice and the semi-jug, but also of the pipe placed on the right of the composition, in tune with the two containers. The three capital letters of the alphabet S, F, A, respectively black, ochre and white, which are placed at the vertices of an ideal triangle. Invisibly but perceptively, they underline the spatial value of the entire composition. In it, however, the diagonals are still in contrast to the axis of the pipe and the headline of the magazine La victoi[r]e, which, already on their own account, are always diagonally opposed to the ochre plane on which the entire composition, conceived on a monochrome grey background, rests.
Some parts of the gouache also show the chiaroscuro and graphite shading which Gris, unlike Picasso, frequently used. A discreet bilateral symmetry, produced by the opposite alignments of the upper edge of the area occupied by the magazine’s headline and the ochre diagonal plane, collimating with the upper profile of the jug to partially include the letter S, gives the composition that impalpable sense of stability and balance that determines its success