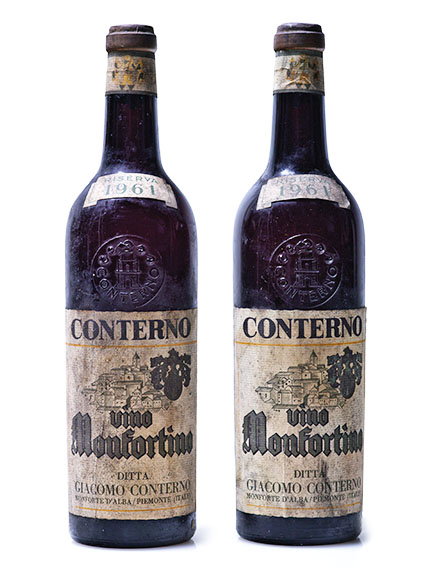 The Monfortino, a rare and refined Barolo of the generation of historic vigneron, is certainly the most prized wine along with very few other Italian ones, and will be the protagonist of the upcoming February auction of Wine & Spirits with three bottles of 1961 Riserva by Giacomo Conterno. It encapsulates the history of the Langhe. It is characterised by a rigorous “classicism”, from the first vintage until those currently on the market.
Drinking a great wine such as Monfortino is like drinking the history of Barolo that begins with Giacomo Conterno. At the beginning of the Twentieth century, he presented himself as a quality producer in a context that, at the time, was the exclusive prerogative of grape sellers and large bottlers.
The worldwide success of Giacomo Conterno winery is inextricably linked to the superior value of the Barolo Riserva Monfortino, a wine of rigorous harmony that enhances a story that is based simply on respect for tradition and the obsessive search for perfection.
Since 1978, Monfortino has been created exclusively from the 14 hectares of the Francia di Serralunga vineyard, a company monopoly with 11 hectares dedicated to the production of Nebbiolo and three hectares for the production of Barbera.
Monfortino is mainly characterised by its elegance and refinement rather than by its strength. It is of a ruby colour, which is rather pale during the first ten years of bottle-ageing, especially on the rim, as the Masters of wine would say, that is to say, the thin layer of wine that is formed when the glass is titled towards the light.
Its aromas, balsamic notes and medicinal herbs, bay and verbena, tend to change during the long years spent inside the bottle. It reaches perfection (if we can talk about perfection) in 15 years at least. A brackish salinity emerges combined with floral aromas, violet, rose and fresh and ripe cherries, especially in younger wines.
The beauty of this wine, which is so difficult to possess, lies in drinking it, not tasting it. Therefore, it is better to drown than to swim, with elegant strokes, but staying on the surface.