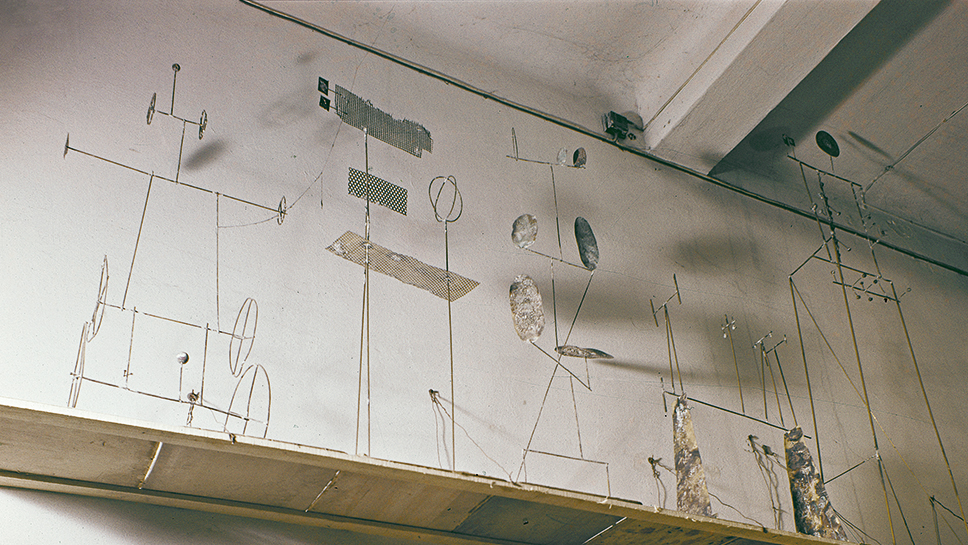 The creative language of Fausto Melotti, one of the most important figures of European sculpture from the 1930’s onwards, developed into greater maturity in Milan between the two wars, a city in which abstract art and rationalist architecture revolved closely around and within the Galleria del Milione and the magazine, “Quadrante”. The main actors in those very crucial years were architects like Giuseppe Terragni, Luigi Figini, Gino Pollini and Gio Ponti and artists such as Lucio Fontana, Osvaldo Licini and Atanasio Soldati. The cousin, above all, of the latter artist, Carlo Belli, was a theorist and author in 1935 of the book, KN, which was considered the “Gospel of Italian Abstractism”. In this particular context, Fausto Melotti attempted from the very start to create sculptural pieces that were a plastic transliteration of musical structures. Melotti wanted to visually materialise spaces of sound.
Melotti’s work enjoyed a new and highly decisive moment from the end of the 1950’s to the beginning of the 1960’s when – following two decades dedicated almost exclusively to works in ceramics – the artist returned to what had initially been the objective of his first abstract works. That is, creating a new plastic language that would translate into the three-dimensional nature of sculptural structures that were immaterial as well as a spirituality that could be evoked by music. Melotti therefore abandoned “modelling” ceramics in order to rediscover a more plastic form of “modulation”. Although any opposition between the two terms of modelling (in reference to traditional sculpture) and modulation (connected to the new idea of sculpture as music) had already appeared in his self-introductory text employed for his first personal exhibition at the Galleria del Milione in Milan in 1935, it was only however from the end of the 1950’s that he started realising pieces of sculpture that were made of thin bars and sheets of brass soldered together, at times with small insertions of ceramics or terracotta. He was thus creating light and subtle compositions that moved and grew in space. Poesia is a work that was starting something entirely new and was crucial to this new creative season that Melotti was experiencing. It had been repeatedly – and before its time – published in the magazine “Domus”, right from the time that it first appeared in July 1962, accompanying, as a matter of fact, a piece of writing by the artist who for the first time formalised his approval of the line of continuity running between his “abstract sculptures of 1935 and those of 1962”. This represented a particularly significant moment for the artist’s newly-rediscovered inspiration and new-found happiness which sprung from it. Exhibited in his decisive personal exhibition at Toninelli Arte Moderna in the Spring of 1967, marking Melotti’s return to exhibiting his works – after decades of absence – around the circuit of art galleries, just after taking part in the Venice Biennale in the Summer of 1966, Poesia continued to play a highly important role in the artist’s professional productive career as witnessed by the unparalleled monograph by Abraham Marie Hammacher from 1975 and the large retrospective exhibition held at Palazzo della Pilotta in Parma in 1976. Poesia is an emblematic piece of work from his open sculpture, highly essential and of supreme stylisation, made of pliable metals, such as, as we have seen, brass. It is a piece of work that has been defined as a piece of anti-sculpture in that it represents a potential de-materialisation of the plastic form, ever so simply enclosed within a very basic design in space, made up more of voids than bulks and all of it defined by a sequence of suspended and thin lines. Undulations and spaces arranged according to the lightness and irony that they convey betray, on one hand, the legacy of Alexander Calder’s Mobiles and, on the other hand, the legacy left by the surrealist work of Alberto Giacometti, with his cages that were hanging like stages.Poesia is also a work that encloses within itself, in a unique and rare way, one of the most fertile developments in the whole repertoire of Melotti’s work. A form of synaesthetic development in terms of sculpture, music and, naturally, poetry: poesia. The spatial structure of the work is upwards, ellipsoidal and varied in its range of dimensions and positions. Thus, Poesia clearly anticipated what would, in particular from the end of the 1960’s, become one of the most recurrent themes of Fausto Melotti’s work which was his thème and variations . Inspired by the musical construction of the same name that had originated from the basic motif of the composition but modified according to a series of permutations, inversions and consecutive modulations, it turns the various elements of the work into successive sequences of a musical score, each one developing differently from the previous one. Thus, in Poesia and its varied repetition of form the artist strove to articulate space in a completely new way and with a highly visual rhythm.
The intentional appearance of fragility and instability of the structure which is characteristic of Poesia was one of the ways for Melotti to enable the observer to enter into a new dimension of dreams and uncertainty set within the proliferation of a fantastical vision that was enjoying in that particular period a renewed moment of utter and creative luxuriance. The fact that Poesia appeared among the sculptures in the artist’s studio in a photo chosen by the author to illustrate the essay dedicated to the poetry of uncertainty and published in March 1963 in “Domus” was no mere coincidence. “So it is that artists of my generation, even though they might have fought as pioneers in any of the many movements, have taken part, at least in spirit, in that whole host of ways and languages for which the mind – full of ferment as well as many (and so very different) stimuli – saw and accepted itself as prey to such a rich and fatal uncertainty”.