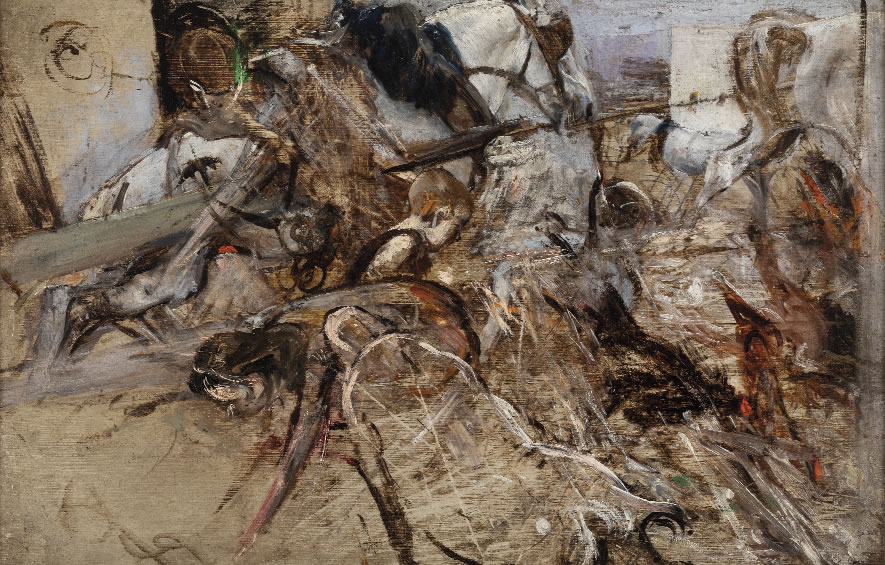 Giovanni Boldini was a multifaceted artist, capable of moving effectively from genre scenes to city views, from landscapes to atelier interiors, from nudes to portraits. He was at his best with portraits, becoming the official portrait painter of the Belle Époque fin de Siècle. His paintings both described and defined the style, trends and aesthetics of the Ville Lumière, the undisputed European capital of the time. Admired for his skill in drawing and his precious search for colour, achieved both through a palette reduced to browns and with tones that are sometimes violent but always tastefully juxtaposed. A virtuosity that led to an entirely original and personal style, as in the Cortile rustico (Rustic Courtyard), where the unfinished executed with broad, fast brushstrokes is as swirling and exciting as his painting. Alexandre Jacques Chantron’s sensual Donna con il bilboquet (Woman at a bilboquet) stands out for its prodigious technique, very close to that of William-Adolphe Bouguereau, whose pupil he was. It is paradigmatic of how photography in the last decades of the 19th century was an important tool for artistic research. Giovan Battista Quadrone is nicknamed the Piedmontese Flemish for the masterful execution of his paintings and his perfect verismo and is one of the artists who fuelled Italian painting in the Neoclassical and Romantic periods, before the Impressionist era. His passion for hunting and dogs, which he painted with great verism and mastery, led him to work successfully on hunting subjects. Giovanni Fattori was undoubtedly the greatest painter of the macchia in the whole of 19th century Italy. In his works, we find the interest in landscape of its most sincere dimension, and an attention to social themes and scenes of daily life that is typical of his rebellious nature. For him, joining this movement was a response to the impatience he felt towards the historical-celebratory painting typical of the Academy, which led him to investigate the reality of landscapes, animals, and humble people, in order to fully grasp their suffering and portray their struggles.