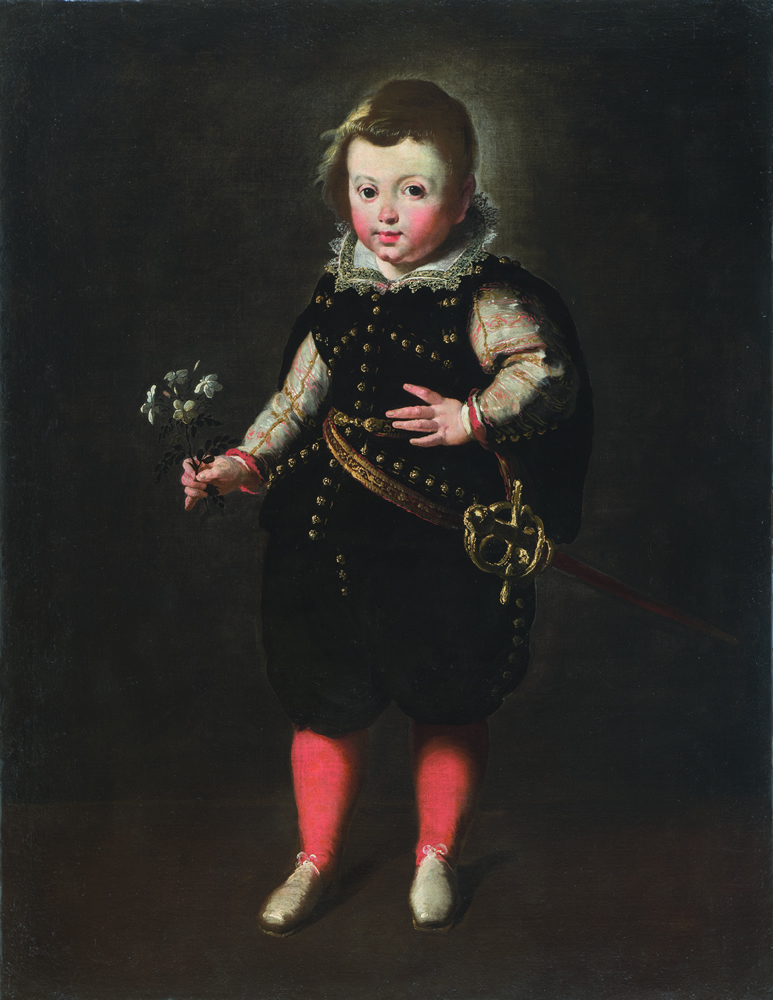 Elegantly dressed like a gentleman, with a sword on his side to show that, no matter how old, a Genoese sees the defence of the Republic as his highest priority, a child looks at us and proudly shows us the twig of orange blossom held in his right hand. He is about three years old and is, apparently, already a groom. The status of the little scion can be measured by observing the details: the numerous gold buttons that profile the tunic or the collar adorned with a precious lace with the typical Genoese motif of the rosone, painted in ways that are far from the Flemish meticulousness. Red is the colour of love: it is no coincidence, therefore, that the socks worn by the promised groom are of that colour, recalling the cuffs and decorations on the sleeves of the shirt that appear just below his “giuppone” (jacket). There is nothing around him: a halo of light envelopes the figure that magically emerges from a neutral, dark, indefinite space. This is how Bernardo Strozzi created an image of extraordinary power, offering us the portrait of Agostino Doria junior (3 May 1615 – 12 December 1640). His rediscovered identity is that of an extremely important child: he is the only child of Giovan Carlo Doria and Veronica Spinola, born on May 3, 1615, posing for Bernardo Strozzi in 1618-1619: the canvas is mentioned in the inventories of the most important patron of Genoa in the early seventeenth century, his father, and described with words of enthusiastic admiration by early nineteenth century historians in the palace near the parish of San Matteo, the noble church of the Dorias, which has reached his descendants with some of the furniture. The painting is abroad and is not included in the exhibition Bernardo Strozzi (1582-1644). La conquista del colore, curated together with Daniele Sanguineti and held in Genoa from the October 11, 2019 to January 12, 2020 on the main floor of Palazzo Nicolosio Lomellino (Via Garibaldi, 7).

It is, however, one of the most extraordinary discoveries of the two-year-long research conducted with Agnese Marengo by carefully rereading the ancient sources and sieving through about fifteen public and private archives, merged into the large volume that accompanies the exhibition (400 pages, ed. Sagep). It is an exceptional finding not only because it revealed that it was commissioned by the greatest collector of the time, who already owned twelve of Strozzi’s paintings by 1617, but also because the dating of the work, certainly before 1620 as the inventories attest, makes it possible to demonstrate that Anton Van Dyck carefully observed the work of his Genoese colleague when he was in Genoa (1622-1627), and not vice versa. It is clear, in fact, that for the two brothers of the Cattaneo family, Filippo and Maddalena, portrayed by the Flemish painter in 1623 and now at the National Gallery in Washington, he adopted the scheme of extraordinary effectiveness developed by Strozzi in his Doria portrait. Van Dyck is certain to have paid the painter at least one visit, as shown by the notes in his precious Italian Sketchbook. Already in 1618, the Cappuccino had started the largest portrait gallery in which Van Dyck also participated, that is to say that of the Raggi family. The gallery included masterpieces such as the Nicolò Raggi displayed in the exhibition and another posthumous effigy of Stefano Raggi, also present in Genoa and that can be admired under the vaults frescoed by the Cappuccino.

This is the nickname by which he has always been known to public and private collectors. After his adventurous move to Venice, which became definitive in 1633, to escape from the rigid religious order that would have wanted him in the convent, he is remembered as il Prete Genovese (the Genoese priest).

Among the discoveries that the exhibition gives to the history of art, however, there is also his real surname, that of his father Pietro Pizzorno, originally from Rossiglione in the Stura Valley. His mother, Tomasina Cosmelli called Ventura, came from the nearby inland town, within the confines of the Republic of Genoa. She most likely gave birth to the painter in her native town, Campo Ligure, in 1582. Not only is Genoa’s exhibition an exceptional opportunity to host forty-five paintings by the Cappuccino under his frescoes (made for Luigi Centurione in 1623-1625), many of which are never-before-seen or never shown to the public. It also delivers to collectors and scholars the result of a study that began well before this exhibition, that is, since the nineties, when the one of 1995 hosted at the Palazzo Ducale was being prepared. The discoveries presented in the essay written with Agnese Marengo, which reconstructs in detail the life of Bernardo Pizzorno then Strozzi, who became Cappuccino under the name of Fra Antonio in 1599 and left the convent between November and December 1609, brings with it many clarifications regarding his work as a painter: initially in the workshops of Cesare Corte and Pietro Sorri in the nineties of the sixteenth century; then friar in the cells of the convent (1599-1609); then at the head of a workshop in strong growth from the end of 1610s; finally in Venice, from 1633 to 1644, with many “young people” to help him make altarpieces, “room” paintings with wonderful allegories, superb portraits and exquisite still lives, for elite collectors increasingly thirsty for his brilliant hyperbolic spells of colour.

Genoa’s exhibition also presents an unpublished Still Life that is now the first of many that can be referred to him: the format, the colour of the preparation, the intimate and refined compositional setting, but especially the mood, link it to his stay in Milan in 1610-1611. Here, he saw the Canestra that Caravaggio painted for Cardinal Federico Borromeo, who was related to the family the priest worked as a guardian for. But had Strozzi met Caravaggio, before? Very probably so, given that very soon Strozzi assimilated and reworked his revolutionary intuitions: the scenic use of light and high-impact realism distinguish the most Caravaggesque works of the priest, as seen in the rediscovery of Christ before Caiaphas, on display.

The exhibition in Genoa offers the opportunity to compare for the first time four paintings three from museums and one from a private one, linked to the large canvas that Strozzi painted for the destroyed church of the Incurabili in Venice in the mid-1630s: the two large models of the Uffizi and the Accademia Ligustica di Belle Arti, the fragment already in Aldo Zerbone collection and recently purchased for the Gallerie dell’Accademia in Venice, and an extraordinary prima idea for the figure of the king, rediscovered in a private collection. In the large canvases one appreciates the qualities of a superb colourist who was the first to understand the revolution of Rubens but also how much the Cappuccino looked at the Venetian masters of the sixteenth century, from Veronese to Titian and Tintoretto. In the sketch, one appreciates his use of the brush: colour that becomes light, light that becomes matter, impasto that becomes vapour.