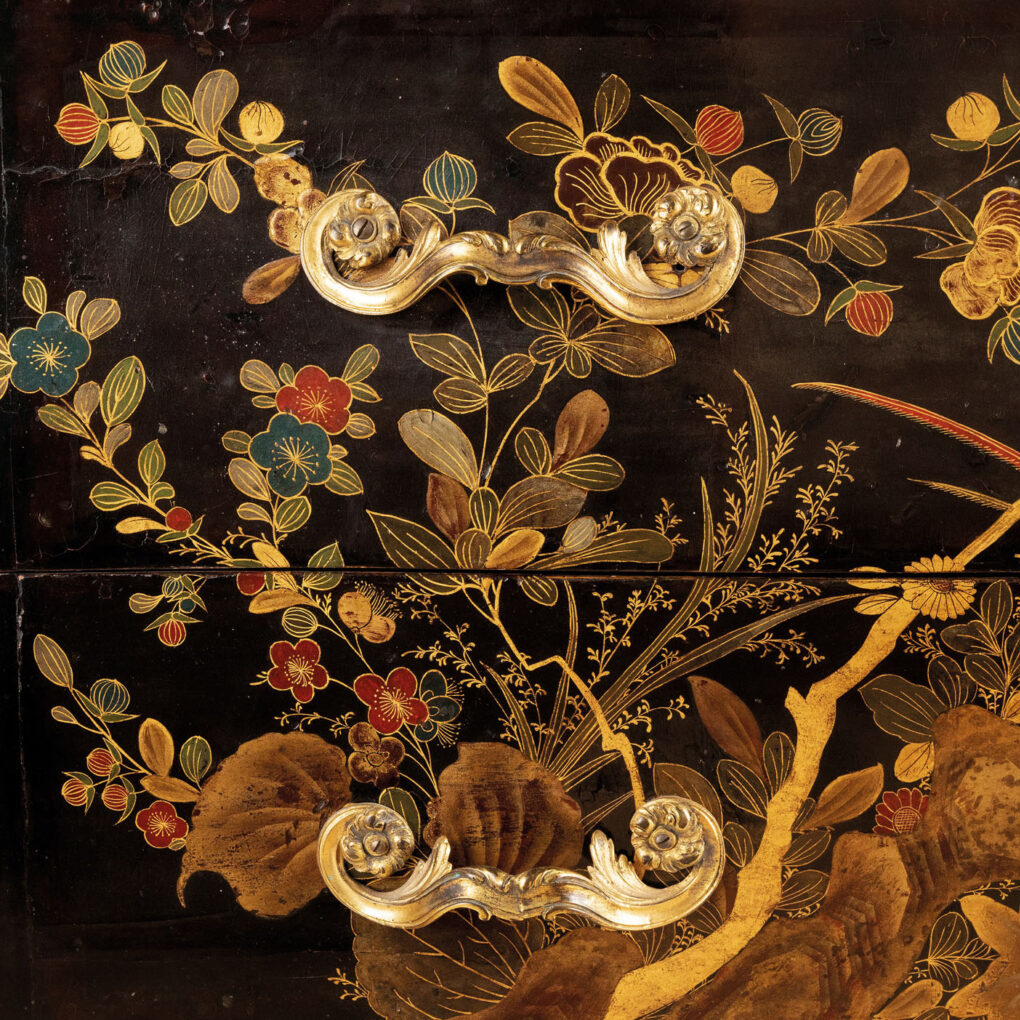 Rococo. The art of grace

Highlights in the large selection dedicated to furniture include the elegant 18th century French commode in lacquered wood and Vernis Martin (lot 617, estimate €20,000 – €30,000), decorated with figures and floral ornamentation illuminated in gold and partially polychrome. This is part of the fortunate trend of chinoiserie and the taste for exoticism, a fashion that was rampant in mid-18th century Europe with the import of lacquers from the East. There were many pieces of furniture adorned with precious Chinese and Japanese panels, or in other cases, worked in imitation. The varnish designed by the Martin brothers, from which it took its name, was famous. The earliest known example today in Japanese lacquer is the one made in 1737 by Bernard II Van Risenburgh (known as B. V. R. B, maître c. 1735), which the marchand-mercier Hébert supplied to Maria Leszczyńska for her cabinet in Fontainebleau.

Also noteworthy is an important series of tapestries from the 18th century Parisian manufactory of Gobelins on a finely carved and gilded wooden drawing room suite comprising a sofa, two bergère, six armchairs and a fireplace mantelpiece (lot 672, estimate EUR 20,000 – 30,000). These bergère armchairs bear the signature, dated 1752, of Jacques Neilson (former director of the Royal Manufactory from 1749 to 1788) and reproduce the decoration known as La Noble pastorale, a well-known theme developed in several variants by the court painter François Boucher (Paris, 1703 – 1770). He portrayed, among others, Madame de Pompadour, Louis XV’s favourite, portraying scenes with allegorical youths, sometimes musicians and others as shepherd boys, a theme that is often used with variants for interior decoration.

Explicative of the fact that fabrics were also not infrequently replaced and reused is the story of a series of covers (originally on a group of armchairs in the Rococo style and datable to 1755/65) belonging to the 3rd Duke of Ancaster and with a decoration similar to a corpus ordered from the Gobelins by the King’s favourite, Madame de Pompadour. Remaining in the Duke’s collection until the 1934 sale, they were removed shortly afterwards and mounted on six hulls in the Louis XVI style, ) a fate that may also have befallen the tapestries presented here.

A wide selection of art objects, where some sculptural figures from the 19th century do not go unnoticed: a partially polychrome terracotta kore (lot 764, estimated value Euro 15,000 – 18,000), a copy of archaic models from ancient Greece (some marble examples are known and now in the Acropolis Museum in Athens) and a pendant sculpted in marble, with a child Hercules and an intense blindfolded Cupid (lots 734 and 735, estimated value Euro 3. 000 – 3,500 euro each), possibly from the Roman school of the first half of the 19th century, which, with their plump and refined plasticity, evoke Baroque memories outlined however in a classical key, in the full taste of the Grand Tour.