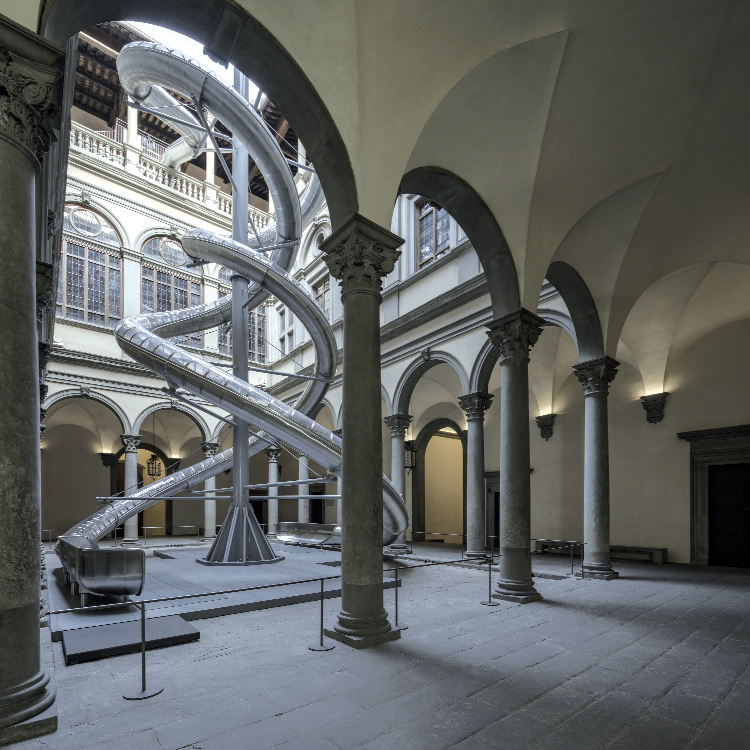 The museum’s calendar of exhibitions features many contemporary events. Where does this need arise?

Palazzo Strozzi focuses on the continuity of its cultural proposals, alternating ancient with contemporary art. Marina Abramovic. The Cleaner, the first exhibition dedicated to a woman, which ended in January, attracted more than 180,000 visitors to Palazzo Strozzi. I’m proud to say that half of them were young people under thirty years of age – the public of the exhibitions usually consists of older people, having more time and money and a more in-depth culture. Seventy per cent of the visitors were women, which fills me with joy. Therefore, in addition to the great interest in ancient art, we felt that Florence also deserved a strong action on contemporary art, as we have shown in the last three years. Florence has always been a contemporary city thanks to the great artistic innovations that have been born here. A huge flow of tourists flock to the city, mostly quality tourism. Among other things, being in a city like Florence also brings other advantages related to the contemporary, namely the opportunity for artists to build a dialogue between past and present. In Italy, the nation of the Venice Biennale, the oldest institution of contemporary art in the world, there wasn’t a place that could offer the general public, not a niche, great contemporary events as they are abroad, and Palazzo Strozzi, in our opinion, could embody this role. There have been amazing successes, from our first major exhibition dedicated to Ai Weiwei three years ago to Marina Abramovic, who broke every visitor record, even beating Picasso, the traditional blockbusters of the exhibition market.

What are the criteria that determine future choices?

All institutions need several years of planning, especially if we want to keep the level of quality high. I was already working on the Verrocchio exhibition five years ago, before becoming the general manager of Palazzo Strozzi.
An exhibition of contemporary art takes about two and a half years of work.
So we have at least a three-year plan, that is, our calendar is already fixed until 2022.
And this is our strength. Palazzo Strozzi does not have a collection to start from; it is our limit and at the same time our strength because we are free to wander. In this sense, we feel we have to bring the cornerstones of the contemporary scene to Florence and Italy, always choosing the artists in the most varied way possible. The only guiding thread is the absolute quality of their work.

How can you strike a balance between cultural excellence and compliance with the budget?

The consensus that has grown around Palazzo Strozzi is due to our choices, sometimes considered daring and not mainstream, but successful and with important economic repercussions. We have overcome the reduction in public funds, about half of which occurred shortly before my arrival, which required a decisive change in the system and organisation of work, at a time not easy because it actually coincided with the beginning of my term of office. Unfortunately, Italy has few economic advantages for those who invest in culture, unlike the United States, for example, which has a tax system that favours cultural fundraising. Today, Palazzo Strozzi can count on 20% of public funds, in large part of the Region and the Municipality (the owner of the building). Forty per cent comes from private funds and the extraordinary forty per cent is obtained from the sale of tickets, excellent results that are often difficult to compare with the majority of museum and exhibition institutions.

How do the artists deal with the illustrious spaces of Palazzo Strozzi?

The size of the halls of the palace may seem small compared to those of the great international museums, but if we combine the two exhibition floors and also count the courtyard and the façade, we’re speaking of thousands of square meters. In 2016, Ai Weiwei set up its largest ever-organised exhibition at Palazzo Strozzi. Bill Viola and Marina Abramovic have also organised some of the biggest retrospectives. It is always a challenge, because working in a building like this is complicated anyway: nothing can be moved or touched, spaces are not modular, and everything is fixed and immutable. The site-specific exhibition by Carsten Höller and scientist Stefano Mancuso, on the interaction between plants and human beings, was perhaps the most difficult exhibition we have ever realised. Think of two huge chutes located in the courtyard without any connection to the walls and perfectly self-standing, and think of what it meant to bring pipes from ten meters underground on the façade, calibrating to the millimeter the air distributed on the climbing plants in the façade to ensure correct scientific parameters. So, as strange as it sounds, in this Renaissance building we still manage to make exhibitions that, in terms of size and ambition, are comparable and often superior to those of major international institutions that operate in much more modern and functional architecture.

How important was it for Bill Viola to exhibit in this museum?

For Bill Viola, the exhibition at Palazzo Strozzi was, in a sense, the crowning achievement of his career, which was built in a constant dialogue between video art and classical art and iconography. For the first time, his works were directly compared with the masterpieces of the masters of the past, which for him were an important source of inspiration. Works he looked up to, during the years of his youth spent in Florence, on which he based decades of his research. A great philological work, but also a great emotion for him because his career began in Florence.

Social media and didactics. How important are they?

Since my arrival, we have worked very effectively on social media. Compared to four years ago, the number of followers has exploded, but above all, there is a lot of following and interest around the themes that we place on our platforms: for Marina Abramovic, we’re talking about millions and millions of views. We are strong on didactics and accessibility for all kinds of audiences, including special audiences. We have programs for families, schools, the elderly, people with Alzheimer’s, autism and Parkinson’s disease, in short, we try to cater for every need and we offer many keys to reading each exhibition.

What are the main aspects of the exhibition “Verrocchio, il maestro di Leonardo” curated by Francesco Caglioti and Andrea De Marchi, open until July 14, 2019?

This is the first exhibition ever made on Verrocchio, perhaps because it seemed an exhibition almost impossible to achieve: his works are few and scattered around the four corners of the world, loans are difficult, the theme is quite complicated, the economic impact on the budget is strong. The idea started five years ago, as I said, when I was still working in London, as a small dossier around Verrocchio, an artist well represented in the British collections. Then, when I arrived in Florence, this idea turned into a huge exhibition with over 120 works from the most important museums in the world: my colleagues were extraordinary lenders, all convinced of the scientific value of this initiative. Our aim is to present Verrocchio as a new protagonist and a great name of the Renaissance, not only because he was Leonardo’s master, but also because he was really the junction, the one who managed to connect two different worlds: the world of Donatello – of which he was a pupil – and the world of Leonardo, of the so-called modern way. All the great protagonists of the next generation have worked at his workshop: Perugino, master of Raphael, Ghirlandaio, master of Michelangelo. Verrocchio was the one who created the language of the time of Lorenzo the Magnificent, who on mimesis, perspective, the characteristics of the so-called early Renaissance, was able to create a refined and tormented elegance, sometimes Hellenistic, that characterises his extraordinary style. A fundamental theme of the exhibition is the relationship between the master and the young Leonardo da Vinci, of whom we have true masterpieces from his youth: unfortunately, the Baptism of Christ of the Uffizi is missing, an emblematic altarpiece made in Verrocchio’s workshop with the famous detail of the angel painted by Leonardo. We also have new discoveries, in particular a terracotta, the Madonna and Child of the Victoria and Albert Museum in London, dated around 1472, which, according to Francesco Caglioti who has been studying the problem for many years, is the only sculpture that can probably be attributed to Leonardo. An international consensus has arisen around this attribution, which will lead to discussion and probably change the vision of Leonardo’s early career.