Morlotti & Munari The 1950’s in movement

For Italian art the 1950’s represented a fertile and rapid confrontation between the figurative and the abstract with the birth of artistic movements that showed the strength, the enthusiasm and the generating force of the ideas of a society that had been destroyed in the Second World War and that wanted to rewrite in the best possible way its future. In the forthcoming auction in Milan of Modern and Contemporary Art on November 23rd in the Sala Carroponte of Open Care – Frigoriferi Milanesi, two works by Ennio Morlotti and Bruno Munari will be going under the hammer. Although contrasting in style – these works talk of very distinct styles and histories – both works are joined in their quest for originality. The artistic career of Ennio Morlotti, born in 1910 in Lecco, was punctuated by encounters and journeys that broadened his knowledge and inquisitiveness on a European level. On his first trip to Paris in 1937 he was struck by the works of Cézanne, an artist who was destined to enjoy a decisive role in his own future career. He took part in 1946 in the “New Front for the Arts” of Giuseppe Marchiori with Renato Birolli, Guttuso and others and, in 1952, in the “Group of the Eight Italian Painters” guided by Lionello Venturi, among whom figured Afro Basaldella, Giuseppe Santomaso and Emilio Vedova. Wilted Flowers from 1955, was an important work not only because it was presented at the XXVIII International Art Biennale in Venice in 1956, but above all because of its shift from the figurative to the informal, a period in which all that was material imbued the style of his work in the years to come.
The career of Bruno Munari, born in Milan in 1907, started off with his adhesion to the second phase of Futurism, at the end of the 1920’s, before at a later stage joining the Abstract artists such as, in first place, Lucio Fontana, Osvaldo Licini, Fausto Melotti, Atanasio Soldati and Luigi Veronesi, all promoted by the Gallery del Milione in Milan. In 1948, with Gillo Dorfles, he founded the “MAC” (the Movement of Concrete Art) that continued until 1958. His Negativo/positivo from 1951 in the current auction, is characterised by its square shape in which geometric outlines annul the classic contrast between the foreground and the background. 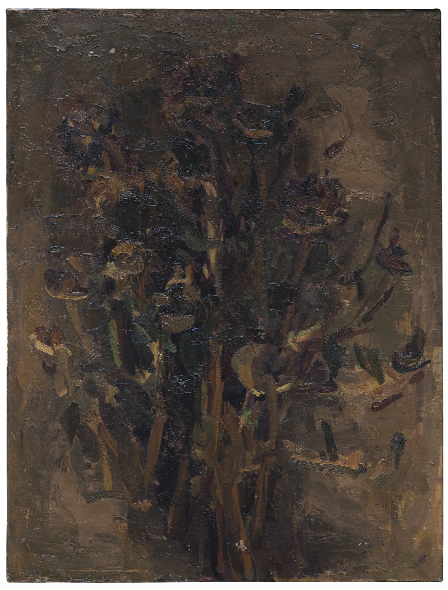