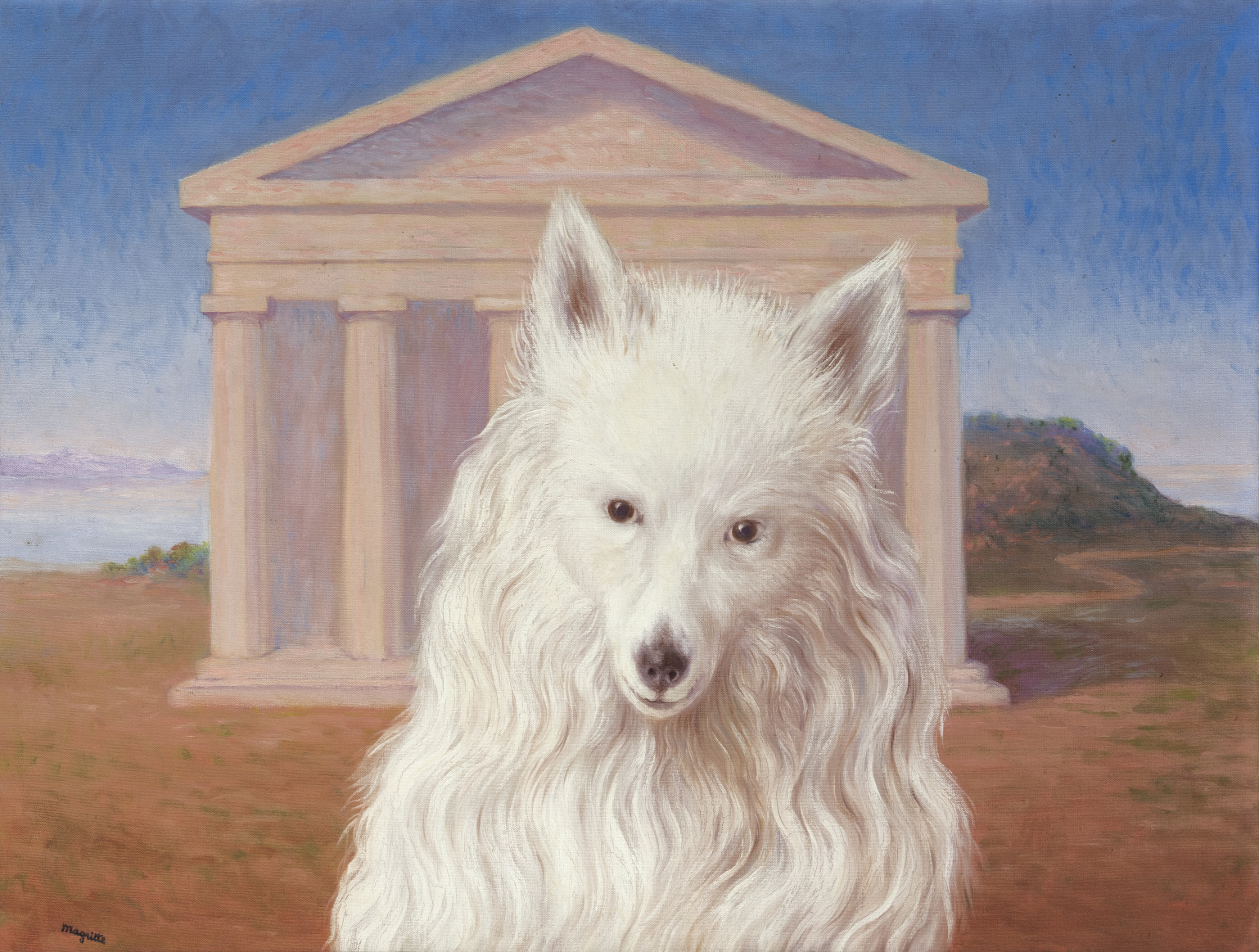 When in December 1965, invited by his lawyer and collector Harry Torczyner, René Magritte made his first and only trip to the United States for his retrospective at the Museum of Modern Art in New York, the painter was concerned about whether he could take his dog on the plane and whether American hotels accepted dogs.
A negative answer, combined with his little pleasure for travel, probably (surely) would have led Magritte to refuse the offer. In return for his permission to reproduce the sky-silhouetted bird motif, the Belgian airline exceptionally allowed his dog to travel in the cabin: thus, Loulou flew with his owners for the first time, crossing the Atlantic Ocean.

This anecdote shows quite well the attachment that Georgette and René Magritte, this childless couple, had for their pet and, more generally, for all those who accompanied them from their marriage in June 1922, until Georgette’s death in 1986. Dogs, cats, doves or other pigeons – which they were reluctant to kill even in times of war – inhabited their various homes. The pictures taken often kept track of their pets, anonymous witnesses of the existence of the couple, intimate companions that ignored the works Magritte was working on.
Of all the animal kingdom, dogs, Pomeranian Loulous – a balck one, a brown one, then a white one, then a black one – Loulou, two Jackies and then again Loulou – had a privileged place. Magritte would never leave them home alone and took them everywhere with him, never forgetting the obligatory daily walks in the neighbourhood to satisfy the needs of the quadrupeds. As Louis Scutenaire, the friend of all time, biographer, collector, and an admirable poet, once wrote: “Those who know his attachment to his dogs will not be surprised to find out here that he had three since his marriage, three Pomeranian Loulous. The first one was Loulou, all black. The second was Jackie, brown-red and the third, again Jackie, was all white. If, on the one hand, the bird, the eagle, the dove are often present in Magritte’s works, the dog becomes rarer. With a few exceptions, in fact, the man wearing a bowler hat that walks or floats in his paintings is a lonely walker.

Le civilisateur, whose title was conceived by Magritte, is the portrait of Jackie, the second dog named this way, and the third Pomeranian he owned. Far from being a work of chance, a painting made for Georgette for example, the dog takes its place in René Magritte’s pictorial research, as well as the other elements that populate them. Painted in June 1944, the work is imbued with colours and the “impressionist” touch of the “full sun” period or “solar period”, which Magritte himself called the “Renoir period”. In 1943, at the height of the Second World War, in the darkest hours of occupied Belgium, Magritte decided to borrow Renoir’s fragmented touch, warm and fruity tones, reinterpreting some of his paintings, such as Les grandes baigneuses or Berger, and applying his new technique to La Source by Ingres (Les bons jours de Monsieur Ingres, 1943). Besides trying to overcome the dullness of the Occupation, the painter tries here to demonstrate that it is possible to address serious issues and to continue his research by adopting a more captivating style, eluding the “greyness” of everyday life, in short, opposing the sun to the night. Scutenaire mentioned again the works of this period: “Why not painting like Renoir if his tics are your happiness? What a joyful sad company, as in the artist’s idiosyncrasy (as the new Monsieur de Bièvre gladly said, not without a play on words), which imposes his luminous images on spirits overwhelmed by the misery of war! La moisson majestically opposes deprivations. Le lyrisme opposes the drought of mortal balances. Le sourire is the reverse of all kinds of pains. Le somnabule, La gorgone psychoanalyses the fighter and his equipment while La cinquième saison and Le civilisateur are lightly disturbing yet peaceful. The work of the early forties is a flash of light in dark times”.

However, Scutenaire’s enthusiasm was not shared by the painter’s collectors and admirers. On the contrary, they were reluctant to the new way through which Magritte wanted to offer new possibilities to surrealism, a bath of youth, leaving behind his disciples or imitators. Printed in 1946 but not published, Surréalisme en plein soleil concluded as follows: “One must not fear sunlight just because it has almost always served to illuminate a miserable world. Under new and fascinating characteristics, the sirens, the doors, the ghosts, the gods, the trees, all these objects of the spirit will be brought back to the intense life of bright lights in the isolation of the mental universe”. In June 1946, after meeting André Bréton, whom had returned from his American exile, Magritte wrote in support of his new painting technique: “It is not about abandoning the science of the objects and feelings that surrealism has created, but rather using it for purposes other than those of the past, or we will be bored to death in surrealist museums as well as in others”.

A sharp reply arrives from Paris, a prelude to a few years of disagreement between the two men: “And how would that be, since you feel the need to get it from Renoir? You go get it but with poor results. Besides, Magritte’s sun would be something else, by definition. Be assured that none of your last paintings gives me the impression of the sun (Renoir’s, yes): not the slightest illusion. Is it my fault, after all? …”.

Portrayed half-length in front of the landscape of a Doric temple, in the painting Jackie takes the aura of an emperor rather than a guardian, a historical figure posing in front of an immutable decor. The ephemeral life of the dog is thus opposed to the perpetuity of the building, juxtaposing the whiteness of its mantle to the marble tinged with pink by the lights of dawn. In the catalogue raisonné of Magritte’s work, at number 561, David Sylvester suggests that the Greek temple may have been borrowed from the scenario of Paul Delvaux’s painting, Le temple, Le canapé vert (1944). In his work, Magritte ironically replaces a young and naked ephebo with the portrait of his dog. However, two years later, Magritte presented a new version of Le civilisateur, a 1946 tempera taken from the Catalogue under number 1208. This time, the old temple is replaced with a thick forest in the shape of a fortress, a setting that we find in two oils dated 1944, La vie précédente (CR n. 565) and Elsinore (CR n. 567). This gouache was exhibited from November to December 1946, at the Dietrich Gallery in Brussels, together with another “portrait” of an animal, this time of his cat, a gouache entitled Raminagrobis (CR n. 1207), where the feline lies on the tracks like a locomotive.

Two months after Le civilisateur, in August 1944, Magritte delivered a second version, an oil in which his dog is depicted in profile in front of a luminous landscape, a canvas painted in the form of a vignette (Le civilisateur, 1944, CR no. 574). The painter wanted to abandon the rectangular shape of his paintings to “strengthen the artistic genre of these images” and make them appear as “the reflections of a world apart, different from that of generals, bankers and all other corporations”

In 1944, Magritte also painted several works linked to the theme of animals, such as the portrait of a horse bust in a clearing, Le météore (CR 559), that of a pig turning towards the spectator, in the alleys of a cemetery (La bonne fortune, 1945, CR n. 579) or that of an owl smoking a pipe while looking at a landscape through the window (Le somnambule, 1946, CR n. 608).

In a letter dated June 10, 1944, referring to Le civilisateur, Magritte wrote to Marcel Mariën: “I started a new painting portraying a horse with a rare enthusiasm and of good quality. Nougé, who has seen it begin, finds it of the utmost importance. I think it is curious to see people, then objects replaced by animals that seem to suggest life better. (Real life, different from the life built by statesmen)”.

At first glance, Le civilisateur, with its appropriate title, is a moving work, staring at the viewer with its little black eyes. However, it also seems to carry with it a severe judgement on the homicidal madness of men in those last years of war, of which not all the atrocities had yet been revealed