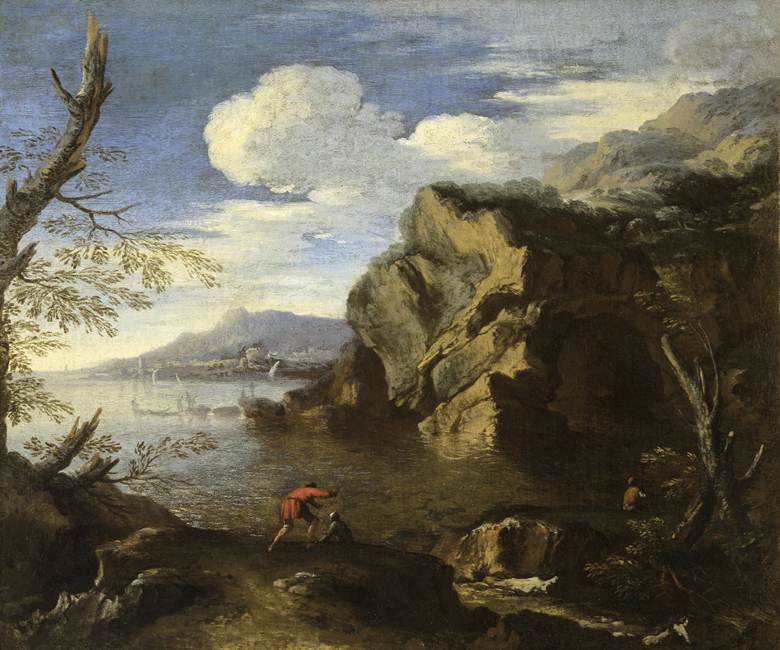 Landscapes and capricci halfway between Reality and Make-Believe

In the forthcoming auction of Old Masters on May 31st four canvases that represent two whole centuries of the taste for landscape, a pictorial genre so loved by collectors, will be going under the hammer. From Late-Mannerism to Naturalism to the Baroque, these two centuries will be spanning right up to the Rococo and Romanticism. Let’s begin with the two paintings by Alessandro Salucci, from Florence and by the Flemish painter, Joahnnes Lingelbach. The paintings depict an “Architectural Capriccio with a Triumphant Arch and Imaginary Port” and an “Architectural Capriccio with a Church and Port” that might be considered to be among the masterpieces of the two painters. Salucci arrived in Rome as a very young man and he enjoyed many important public and private commissions. Acquainted with Viviano Codazzi, Salucci was, however, more than able to follow his own distinctive style on account of his greater amount of artistic creativity and for the imagination he bestowed on his depictions of a whole range architectural subjects, from Roman monuments to Baroque churches and Renaissance facades. A “Sea View with a Rocky Coast and Fishermen” by a young Salvator Rosa shows how the artist studied from close observation of his subjects with a glimpse of the sea that was animated by boats and small figures in the distance with an impassable rocky mass at the centre of the canvas and figures in the foreground intent on their fishing. A “Landscape” by the Neapolitan painter, Gaetano Martoriello is a highly rare and extraordinary work both in terms of the size as well as in terms of its preservation. Gaetano Martoriello was apupil of Giacomo del Po and Nicola Massaro and was one of the main painters of seventeenth- and eighteenth-century landscape painting. He finds his finest artistic expression in the evolution of Salvator Rosa’s Rococo style which may be noted in the liquidity of his scenes and the highly formal way he represented his elegant marine backdrops and a certain Arcadian luminosity.