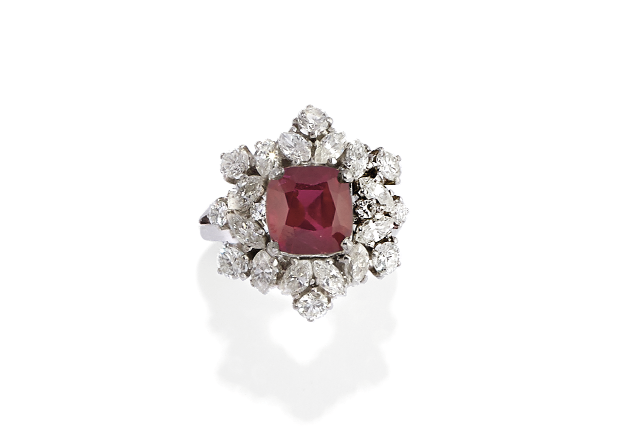 The Department of Jewellery and Watches, the first semester of 2017 registered a total of 1,230,830 euro, with a percentage of lots sold of 61.6% and of lots sold in terms of value of 93.2%.
A platinum ring with diamonds and a 3.98-carat Burmese cushion-cut ruby, made by Cusi circa 1960, went under the hammer for 136,400 euro, whilst a platinum ring with an old-cut diamond weighing 8.87 carats, reached 55,800 euro, and a, lastly, Panthère Cartier brooch in platinum, onyx, emeralds and diamonds went for 52,080 euro.
Further significant pieces included a Trombino ring with a sapphire and diamonds by Bulgari circa 1960 which went under the hammer for 47,120 euro and a gold necklace decorated with two strings of natural pearls which went for 34,720 as well as a platinum and diamond necklace, also by Cusi circa 1960, went under the hammer for 29,760 euro. Last of all, a parure set in gold, with a natural pearl and diamonds, by Petochi circa 1960, was sold for 24,800 euro.
Among the watches in the auction an important result was achieved by a Rolex Oyster Cosmograph Daytona, Ref. 6263, from the mid-1970’s, achieved the excellent result of 43,400 euro.