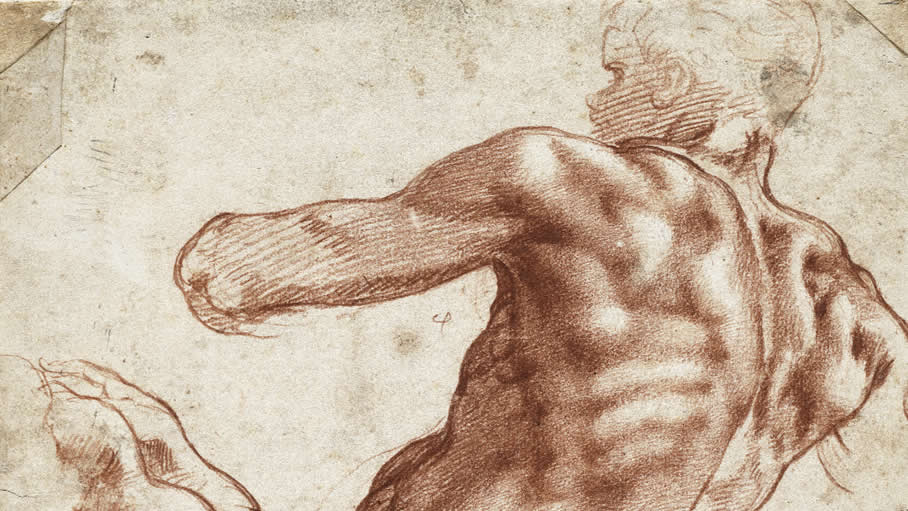 IN MICHELANGELO’S MIND
Sublime is the key to understand Michelangelo. His art as a sculptor, painter and architect represents the climax of Western visual culture captured at the height of the Renaissance, the artistic and cultural movement that focused on the continuity with the values of balance and grace of classicism. His art is as immense as his curiosity to experiment through a tormented and tireless expressive research. Drawing is the unfiltered germination of the creative process, of the Platonic idea of an archetype that becomes concrete through a web of graphic signs, sometimes with sheets full of figures and preparatory close studies of human anatomy, for example, the figures that decorate the ceiling of the Sistine Chapel. Others, with sketches of famous architectural projects such as the tomb of Giuliano de Medici in the New Sacristy in San Lorenzo in Florence, and the dome of St. Peter’s Basilica in Rome.

Having the chance to admire more than two dozen drawings by one of the masters who have most influenced the history of art is a rare opportunity not to be missed. Seeing the exhibition Michelangelo: Mind of the Master, open until January 5, 2020 at the Cleveland Museum of Art, is therefore imperative. For the first time in the United States, a group of sheets from the extraordinary collection of the Teyler Museum in Haarlem, founded in the eighteenth century by Queen Christina of Sweden (1626 – 1689), will be exhibited along with those kept at the museum, and those lent by the J. Paul Getty Museum.