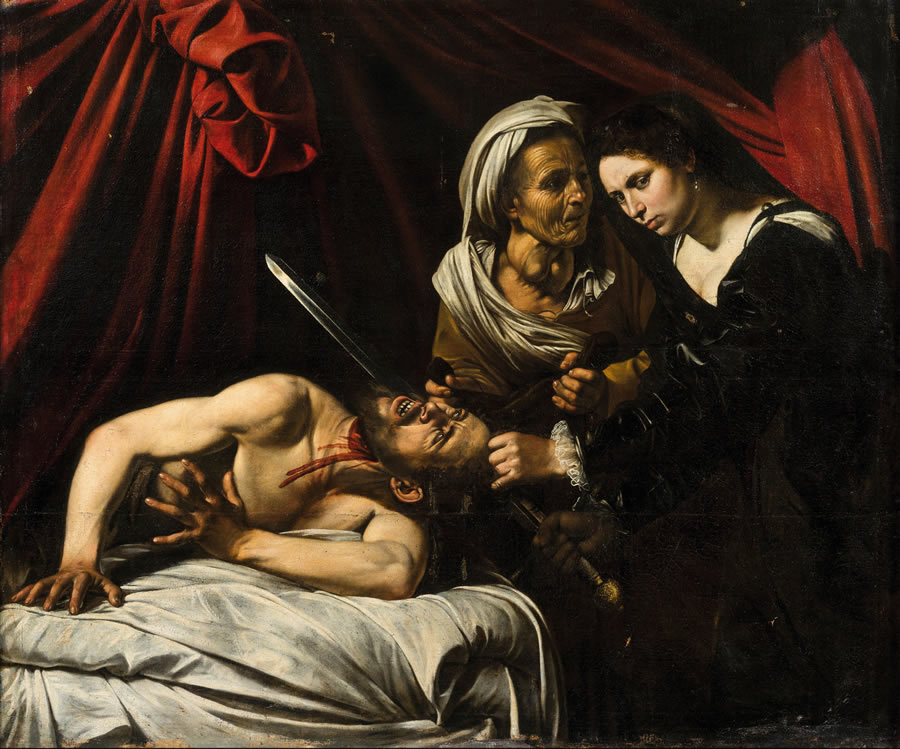 Caravaggio with an asterisk

No, this is not the title of a conceptual work: I don’t know, something by Giulio Paolini. I wish.
It was a typographic asterisk that was on a label at the Pinacoteca di Brera in autumn 2016: next to the peremptory writing «Caravaggio». It referred to a note that said: «This attribution is the precondition for the loan and it doesn’t reflect the official position of the Pinacoteca, its Board of Directors, its Advisory Committee, its Chairman or its staff». Don’t let the legal/bureaucratic language confuse you: these words are very important as they represent a milestone in the evolution of the role played by art historians and museums in relation to the market and attributions. But first things first. The painting concerned was Giuditta e Oloferne (“Judith and Holofernes”). The current ‘manager’ of the painting (a renowned French art dealer) said it was found by chance, cemented in an attic in Toulouse. It is a far better version of a painting formerly known thanks to one belonging to the collections of Banca Intesa, Naples.
Some scholars claim that they are reproductions (probably by Louis Finson) or derivations of a Giuditta (“Judith”) by Caravaggio painted in Naples in 1607. Others think that the painting found in Toulouse and now exhibited at the Pinacoteca di Brera is the original painting by Caravaggio. The person who is writing this article thinks that the paintings are not authentic and that they are not an invention by Caravaggio either: in fact, the structure, the movements and the gazes they portray are a far cry from Merisi’s artistic strength. However, this is not what matters now.
What matters is this: can a museum, which is (or should be) a research body, exhibit a label it doesn’t believe in? In other words, can it become a showroom that amplifies, legitimises, advertises a work on the market without expressing its opinion about that same work?
Mind you, the point is not its «official position» (another silly expression) but rather the relationship between the museum and its visitors. It is a huge matter of trust. Because Brera’s visitors have the right to know that ‘their’ museum protects them: the right to think that it protects their good faith, their necessary and sacrosanct incompetence, their trust. Therefore, the Pinacoteca should take the responsibility for its opinion and stand by it. And if this means that the loan won’t be granted, well, it should give up the possibility. Because the idea of an ‘irresponsible’ museum is in contrast with the principles of the museum’s ethics.
It also gives cause to suspect that Brera’s choice gave that ‘Caravaggio’ an unfair advantage on the market. To be honest, it’s a risk that it shouldn’t have run. But honestly, I don’t think that this has actually happened and even if it had, it was short-lived: only the time necessary for the echo of the news to fade away. The market needs ‘absolute certainties’ or at least strong accountability and “Caravaggio with an asterisk” is not exactly the ideal precondition for a rich sale. On the other hand, if in 2011 the National Gallery hadn’t invested all its prestigious reputation in the label that attributed the Salvador Mundi to Leonardo without the shadow of a doubt, it is highly unlikely that a rich Saudi prince would have paid 450 million euros for that painting.
However, in the hall of mirrors that connects the market of paintings to attribution schemes, this truth is somewhat blurred too. Because, if the attribution of works is an exact science, the steps and the time needed to reach its exact result are not predictable. It can take days, years, centuries and that is completely different from market timing. Until the truth is brought to life, is accepted and accepted by everyone thanks to its undeniable evidence, fluctuations, sometimes even dramatic, are the norm. A super certified painting by Leonardo dating back to ten years ago may not be authentic today: the passage of time my have turned it into an art atelier’s work, a reproduction, a copy, a forged painting, according to a diagram that pushes the real value of the work on a roller coaster that would leave any art collector breathless. This observation can also be applied to Abu Dhabi’s Leonardo: its attribution is likely to be right but it has never acquired the status of res iudicata.
Whether with or without the asterisk, buying a work of ancient art is always a leap of faith and, as such, it shouldn’t be based on the final reward one might get (which can never be taken for granted as only God knows it) but rather on the moral, intellectual and emotional fulfilment: that’s the true reward of the purchase.
As for faith, for Pascal it was a bet and, at the end of the day, investing in a work of art by an old master is a bit like betting. As such, it knows no certainty but, at least, it should be fun, thrilling, exciting. With or without asterisks.