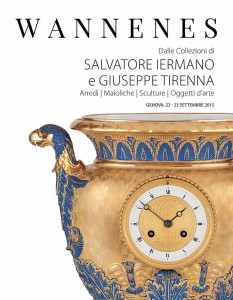 Salvatore Iermano’s life, both professionally as well as personally, started and developed – as often happens to the luckiest among us – within solid family traditions. In Salvatore Iermano’s case, there was his father, Antonio, who was a famous art dealer with a gallery in Naples in Via Costantinopoli which was, once upon a time, the street of antique dealers and artists. Salvatore was a constant visitor to his father’s gallery and naturally fell in love with the objects on display and the stories they told. So much so, at just over twenty years of age, Salvatore set off on his own European Grand Tour, something he deemed necessary in order to deepen his knowledge and understanding. He soon decided upon Paris as a place in which to live and work, then like now, one of the liveliest and most important international markets for the arts. Salvatore Iermano worked for many years in Paris and was able to establish good relations with all the most important personalities in the world of art. No less importantly, it was in Paris that he also met the woman who would become his irreplaceable partner both at work and in his private life, Lucia Iermano.
Then, during the 1990’s, they decided to bring to a conclusion their professional lives in the French capital and they opened a gallery in Naples in Via Domenico Morelli. The gallery was called “Antiquitès Iermano” and contains furnishings and objets d’art that exude a sophisticated international taste.
It was during those years, too, that Salvatore Iermano started to take part in the most significant antique fairs and exhibitions. Among these, the Florence Biennale at Palazzo Corsini, the Rome Biennale at Palazzo Venezia as well as Milan’s Biennale, Parma’s Gotha and all the exhibitions in Naples in which Salvatore enjoyed a highly central role since he was also the President of the Antique Dealer Association.
Today, Salvatore has decided, after all that he has achieved, to leave others the joys, the thrills and the hard work involved in the life of an art dealer. He has decided to dedicate himself to the loves and passions of old, above all research into – and study of – fascinating and absorbing works of art from years past.
We are happy that a part of his personal collections are to be put under the hammer at our Auction House, a place where Salvatore Iermano has been, over the years, an assiduous visitor, paying attention not only to the quality of the objects but also to the history behind the works in which he was interested.

My family, the Tirennas, hail from Treviso and, indeed, it was in the city of Treviso that they had long ago achieved a certain elevated social position since they sat in the Nobil Consiglio in 1388 just as the Signoria of the Carraresi passed under the domination of Venice.
It was my great-grandfather who settled in Palermo during the first half of the Nineteenth century and thus set up an antique business with an excellent art gallery in Corso Vittorio Emanuele, in front of the Cathedral. He was assisted in the running of the gallery by his children and, in time, his gallery became a habitual stopping-point for the great collectors and personalities who were passing through the city.
My father was the one who took over the family business and, in the last century, was also able to make his mark in the city and so became one of the most important and most highly-esteemed antique dealers in Palermo and in Sicily. My father presumed I would have chosen to be a notary as my career.
However, my love and passion for art and, most certainly, the fascinating hours spent in my father’s gallery even during my university years encouraged me to follow that very same road that had been trodden by the Tirennas for over a century. Therefore, in 1961, I felt ready to enter into the family business.
So, following in the traditions of our gallery, I concentrated my efforts from the very beginning on the quest for works that would thence be noted for both their beauty and their rarity: furniture, paintings, corals, silverware, ivory, ceramics and European – but especially Sicilian – porcelains. In truth, the gallery specialised in everything that Sicily had produced so masterfully throughout its lengthy past history.
I owe a great debt to the friends I have made over the years from some of the most important families in Sicily – cultivated and illuminated collectors, all of them, who helped me further develop my own personal sensibilities and taste. I was thus encouraged to travel the length and breadth of Europe and visit a whole host of art galleries, in search of works of art that were not only Sicilian but came from other parts of Italy and beyond. Thereafter, I was proud to witness the ever-increasing importance of the gallery and the fact that it soon became a reference point for collectors. I, too, then fell under the spell of collecting art!
I therefore began to collect and choose important objects of high quality, those objects that were above all significant in terms of Sicilian history and culture. I was satisfied to see my burgeoning passion recognised several times over in exhibitions and fairs, as in the case of the exhibition, in 2013, that was dedicated to antique corals from the Pepoli Museum in Trapani.