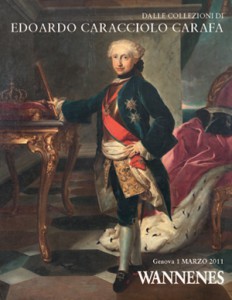 FROM THE COLLECTIONS OF EDOARDO CARACCIOLO CARAFA

There are few families from the aristocracy in Italy that have enjoyed so much fame in terms of power, wealth, family relations and political influence as the Caracciolo family. This is due to the fact that the family’s history has constantly been interwoven with events that have taken place in the country: a relationship that is as vital today as ever.
Originally hailing from Naples, the roots of the Caracciolo family go back to the Tenth century. Teodoro, the founder of the family, died in 976, according to papers related to a donation. From that moment onwards the history of his descendants has been a multitude of family branches from the so-called Direct Lines (Linee antiche) (the Canella, Ugot, Viola, Ciccola families) to the Del sole, Bianchi Rosso and the Caracciolo Pisquizi families. All of these various branches, thanks to the power of the family and its central role in the tumultuous history of the Kingdom of Naples, have accumulated high positions of responsibility and honour in a succession of various events. It is impossible here to mention all the important personalities of the family. It would suffice to recall the role, in the Sixteenth century, played by Marino Caracciolo, Cardinal and Ambassador for Charles V to Francis II Duke of Milan, in the devolution of that particular state towards the Empire (or, more simply, Spain). And then, two centuries later, Admiral Francesco Caracciolo played a highly significant role in the first stages of Naples’ – and Italy’s – Risorgimento. Lastly, the importance of the family today in the world of communications and publishing in Italy should not be forgotten. The Caracciolo Pisquizi, or degli Svizzeri, di Santeramo, should also not be forgotten. Originating from a certain Filippo di Landolfo who lived towards the beginning of the Twelfth century, this branch of the Caracciolo family (from which, amongst others, the branch of the Caracciolo del Sole family would also split) has benefited from an impressive sequence of honours as well as strongholds: Neapolitan patricians, the Caracciolo Pisquizi family have accumulated three baronial titles, six titles of Counts, fifteen of Marquesses, eighteen of Dukes and eleven of Princes…….
It is, of course, not very difficult to imagine that also the Caracciolo Pisquizi enjoyed a central role in the history of the Kingdom of Naples and Sicily. Not only, they they also enjoyed the glory of a saint en famille in 1807, Saint Francis Caracciolo (1563-1608). This other branch of the family that added the name of Carafa brings to mind that other great Neapolitan household that gave Paul IV ro the Church – a name that was immortalised some centuries later by (La Duchesse de Paliano).