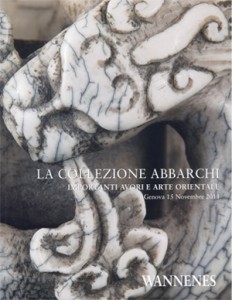 Among all the collecting categories few can boast such consolidated traditions as the collecting passion for ivory, both produced in Europe and the East. Cloaked in the fascino of a material that is velvety to the touch, ivory evokes exotic distant lands and has long had pride of place in famous collections the world over.
Closely linked to the fascinating history of the Wunderkammer, ivory was much sought-after not only on account of its highly tactile nature but also on account of the extreme sophistication of the intaglio that was achieved by means of both technique as well as the superb pliancy of the material itself. Even a partial list of the extraordinary works that expert craftsmen have carried out in this material over the centuries would be impossible. Just think of one of the masterpieces of European sacred art, the extraordinary, almost perturbing, English cross, called the King of the Confessors, today at the Metropolitan Museum.
An imposing work, in terms of size too, that has come down to us from the early Middle Ages, marvelling us not only for the beauty of the marquetry but also so for those odious sentiments that the work expresses in its well-known, violent and wholly unacceptable Anti-Semitic iconography.

From this work hailing from the mists of time it is pure consolation when we consider the great and reassuring tour de force of nineteenth-century ivories and the exotic Eastern works that created such passion within the souls of European collectors. All this is to be found in the illustrated lots, a catalogue not only of a collection but of the most refined tastes of one particular collector as well as the constancy and cultivated devotion to this fascinating material.