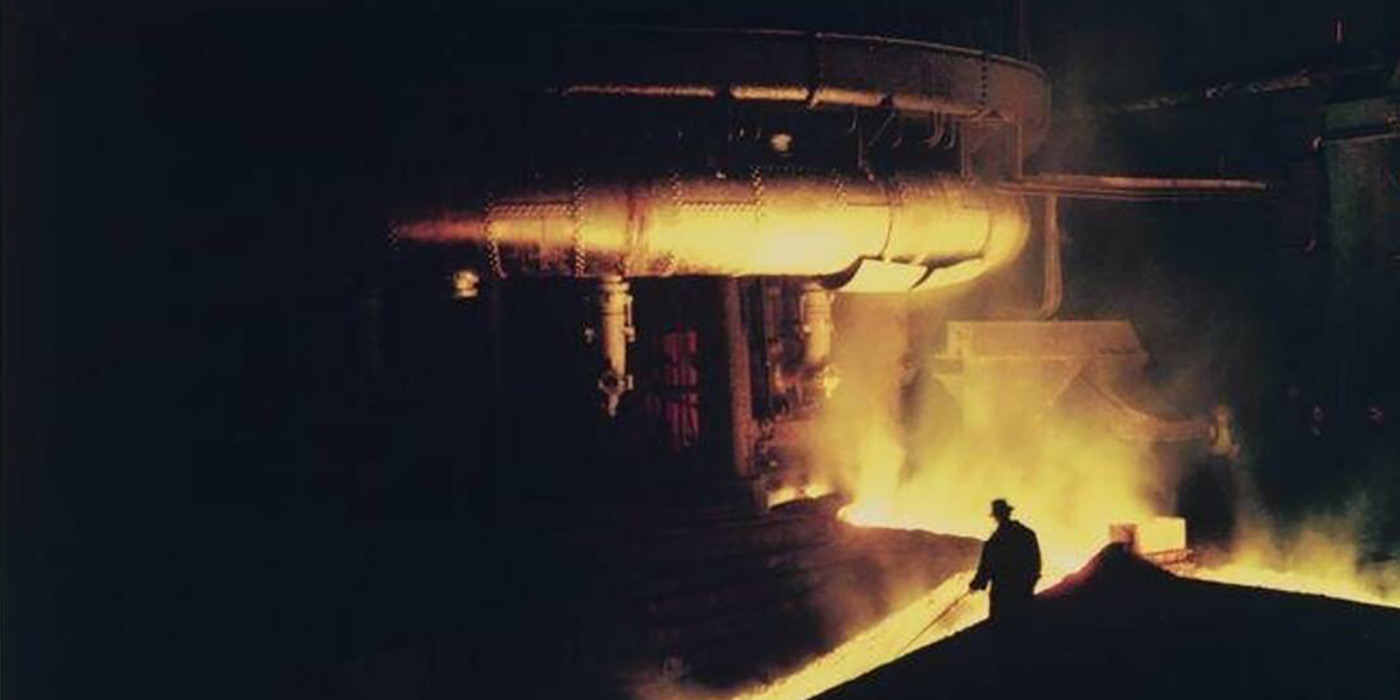 Maurice Broomfield (1916 – 2010) made some of the most spectacular photographs of industry in the 20th century. His work spans the rise of post-war industrial Britain in the 1950s to its slow decline into the early 1980s. From shipyards to papermills, and textiles production to car manufacture – he emphasised the dramatic, sublime and sometimes surreal qualities of factory work across the UK.

Maurice Broomfield was born on 2 February 1916, to a working-class family, living in a small village near Derby, in the East Midlands of England. His parents and grandparents were from a farming background, but his father worked in a nearby munitions factory during the First World War, and later as a lace designer, producing beautifully detailed pen and ink drawings. Broomfield later acknowledged: The impressions of my father making intricate and variegated conventionalised patterns in his peaceful studio, later to be fed into noisy, clattering machines to produce lace, had a considerable influence in my photography (Maurice Broomfield, Maurice Memoirs, 2001 – 8).

Broomfield received a gift of his first camera, a Kodak Box Brownie complete with a daylight printing kit, as a boy. His mother wanted him to marry a local woman and become an office worker, but Maurice had a fascination for machines. In 1931, at the age of 15, he left Draycott School to work at the Rolls-Royce factory in Derby as a turret lathe operator. In his spare moments, he made notes and sketches of work characters and the factory environment at Rolls-Royce, gaining an intimate knowledge that would serve him well in his future photographic career. In the evenings and during holidays he studied design at the Derby and District College of Art, taking his factory sketches into the art school and making them into pictures and designs. He graduated with two first-class honours and won a competition for product packaging.

Broomfield decided to leave Rolls-Royce when he saw a photograph of a retiring employee receiving a gold watch, and envisaged his own life served out at the factory. In 1935 he took up an offer to work as a graphic designer for Rowntree’s, the confectioners based at York. His arrival coincided with the company’s employment of an advertising agency to help promote its products. Broomfield used photographs of the products with selective focus and strong lighting, alongside design with bold patterns and modern typography, to create dynamic window displays.

The display manager was also an ardent amateur photographer who lent Broomfield a camera. In the photographic department at Rowntree’s, he made use of the darkrooms, fascinated by the techniques of developing and printing. Broomfield also exhibited at the York Photographic Society, photographing local ruined picturesque abbeys, townscapes and landscape scenes. An early industrial subject, Welding a Cylinder (1935), shows the hallmarks of his future professional imagery: a bold composition using a circular framing device, a figure absorbed in skilled labour and a light source generated by the work itself.

Broomfield was 22 when the Second World War broke out in 1939. He left Rowntree’s, registered as a conscientious objector, and joined the Friends’ Ambulance Unit based in Whitechapel, in the East End of London. He worked as a hospital orderly and drove ambulances around the country. It was in London’s bombed-out East End that he met medical student Sonja Lagusova. They married in 1942, and both narrowly escaped death during the London Blitz. At the end of the war, Broomfield went on a photographic trip through Europe, documenting students recovering from enforced labour in post-war cities.

Broomfield returned to London in 1947 to set up as a fine art painter. His entry into industrial photography was almost by accident. Some of the personal photographs of architecture that he had made in Europe appeared in a series of prestige advertisements. This work brought him to the attention of Imperial Chemicals Industry (ICI), where he made educational filmstrips about agriculture, and then the Milk Marketing Board, which invited him to photograph their factories.

At the time, industrial photography was largely dominated either by views of cluttered factory settings or decontextualised close-ups of machinery devoid of human interaction. Broomfield was commissioned by companies who wanted their factories to appear technologically advanced and dynamic. It was especially important to present an image of confidence and progress following the Second World War. Broomfield treated the factory floor as a stage set with dynamic human interest. He recounted: My approach to photography was different to the accepted form. They were used to getting a photographer and telling him where to stand and what to take a picture of. … But I disagreed with that. I wanted to concentrate on close shots of the people and the products. It was very controversial (Maurice Broomfield in The Observer Series, 1 April 2010).

Broomfield promoted the idea that images of industry could be artistic and stylish. He produced incisive little booklets to encourage potential clients to ‘Take a New Look at Industry’, just as Dior had done for clothing, using his work as bold examples to illustrate his belief that “visual interpretation of industry can be as glamorous as fashion photography”. He would visit factories weeks before shooting, not only to make pencil sketches, but also to allow his subjects to become used to having him around, sometimes joining the workers for meals. Broomfield’s planning and technical skill was complemented by a natural tactfulness, genuine interest in the jobs he was depicting and a warm-hearted liking for people. He was ideally suited to document the rise and fall of British manufacture, and the heyday of global industry, for the next 30 years.

Broomfield set up a company in his own name and rapidly established a good reputation, becoming Britain’s premier industrial photographer. He also photographed Princess Elizabeth, shortly before she was to become Queen. Among the first jobs listed in his order books are pictures of various British industries, including a sequence documenting the traditional practices of glass blowing for the 1951 Festival of Britain. The festival’s optimistic, progressive view of Britain’s future, celebrating modern industry, arts and science, chimed with Broomfield’s personal interests. He worked long hours to provide for his family – his son Nick was born in 1948, and daughter Ann in 1950 – they appeared in his pictures as models from time to time.

Throughout the 1950s and ’60s Broomfield’s images featured extensively in many different published outlets, trade journals, reports and promotional materials, as well as educational booklets for the BBC and a regular feature in the Financial Times. He undertook jobs for companies as varied as British Nylon Spinners, Royal Doulton potteries, Bowater Paper Corporation, Qualcast lawnmower factory and the English Electric Company. He criss-crossed industrial Britain several times a week, spending on average two-thirds of the year travelling, on commission in Europe, but also further afield in Asia. He also selected his most dramatic images to be printed and framed at large scale for photographic trade fairs and fine art exhibitions. He wanted these photographs to appear as surreal and sublime artworks – creating a sense of awe, beauty and strangeness – rather than simply illustrations.

One of Broomfield’s defining images was taken in 1967 from the deck of a supply boat, documenting drilling operations in the North Sea. It shows the rig ‘Orion’ at night. Its brilliant flare spells success – the result of burning off gas from the well being tested for flow, pressure and composition – appearing like moonlight reflected off the sea. The picture appeared on the covers of both Physics Bulletin and the British Journal of Photography.

In 1981, Broomfield was asked to illustrate the mammoth task of laying 150 miles of gas pipeline across Britain. The venture was cited as a model of collaboration, British industry working at its best on major energy infrastructure. It was to be one of the last large projects of Maurice Broomfield’s working career. Many of the flourishing industries that he had depicted throughout the 1950s and ’60s were now in decline. Steelworks, car plants, shipyards and mines were closing, and the political and economic climate was changing radically under Prime Minister Margaret Thatcher’s government. He decided to retire from his business and enjoy time with his family at Deans Watermill, a centuries-old site on the River Ouse in rural Sussex, which he and Sonja had purchased in 1971.

From the mid-1990s, there was renewed interest in his images. He selected many to be newly printed and restored using digital technologies and enjoyed exhibitions of his work in later life, including New Look at Industry at the Science Museum, London, in 2007 and a retrospective at HOST Gallery, London, in 2008. In 2000 the designer Sir Paul Smith hosted an installation of Broomfield’s works at his shop in London’s Covent Garden. Smith commented that the photography “captures the real heart of what was a booming but harsh time for the UK. Finding inspiration and creativity in gritty surroundings of everyday work is inspiring in itself”. Maurice Broomfield gave his archive to the V&A in 2010. Over 30,000 images, negatives, contact prints, exhibition prints, press cuttings, works order books, and promotional materials arrived safely at the museum stores the day before Broomfield died, aged 94. As part of a museum collection, it is now preserved for research and interpretation for the future.

Today, many of the factories he photographed – and the communities of workers and skills that supported them – have either vanished or been subsumed into global corporations. Maurice Broomfield’s archive survives as a valuable record of this history. His photographs remain relevant today, prompting questions about digital technologies replacing manual labour; the UK entering an uncertain economic future in relation to the rest of the world; and the troubling legacy of industry, prompted by the horrors caused by plastics pollution, radioactivity and chemical waste.