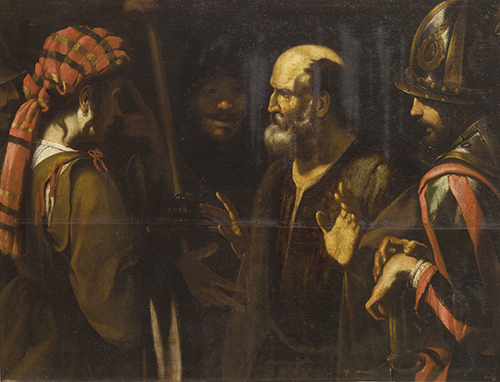 Truth lies between light and shade

The Naturalism of shade and light in Caravaggio’s works cast a long-lasting and deep divide within the painting of the Seventeenth century, the Seicento. Just as an earthquake does, it was the cause behind those heavy shock waves that fell down upon his contemporaries and the generation that was to come after him, after his death on July 18th 1610. And furthermore, it lasted well into the first two decades of the century. By the beginning of the third century of the Seventeenth century, such dramatic connotations in art became diluted in favour of a plastic and chromatic pleasantness that was a more natural preamble to the exuberance of the Baroque.
In the forthcoming auction of Old Masters on November 30th, we have the opportunity to admire three works that will be put under the hammer and that are highly exemplary in this latter respect in that they illustrate perfectly the influence that Caravaggio wielded in the history of visual culture in the West – a style that was so real in its portrayal of human weaknesses and so divine in its infinite beauty.
The first work is The Denial of St Peter by a young Bernardo Strozzi. Thanks to this particular work we are able to understand more deeply and more closely not only the initial style of the artist but also the premature confrontation with the culture of Caravaggio that Bernardo Strozzi had been able to acquire at first hand. By observing a work like this, we can see that Strozzi, even before Domenico Fiasella and Luciano Borzone, injected a naturalistic vein into Genoese art that would be further exploited by the likes of Gioacchino Assereto and Orazio De Ferrari.
The second work is an imposing figure of Saint Jerome painted naturally and holding a large, heavy volume which, on account of its cold light, might point in the direction of Mattia Stomer as the painting’s author, during his early period in Rome and Italy.
The third work is a Still Life with Fruit and Flowers by Abraham Brueghel, an exceptionally large wall painting imbued with an extraordinary decorative impact which, in terms of its quality and its effect, is a superb example of the period and artistic style. Sources suggest that the painter was particularly fascinated by Neapolitan still lifes but there is also no question of doubt that Abraham Brueghel was highly decisive for the general evolution of this particular genre and influenced the likes of Giovan Battista Ruoppolo, Giuseppe Recco and the pupils of Belvedere, on account of an exquisitely theatrical conception of the image. A triumph of flowers and fruit, this wholly surprising piece of work emanates the very idea of fragrance itself as well as accentuating its own monumental appearance with an exuberance of colour, all set against a dark background and a Caravaggesque sense of light that models and enhances shapes and forms thus bringing to the fore the silky surfaces of the fruit.