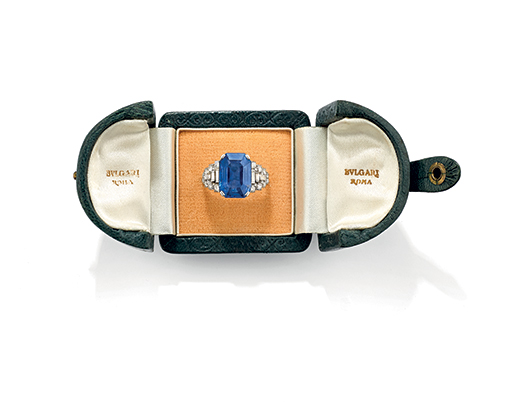 Since it opened its first shop in Rome in Via Sistina 85 in 1884, Bulgari has always been synonymous with excellence and reserved for the likes of queens, refined aristocracy and absolute celebrities. From the very beginning, the exceptional quality of its jewels was imbued with the rarest of sensibilities as well as a highly original use of precious stones, not only selected on account of their brilliant colours but also for their intrinsic value. Is there a woman who would not desire a fairy-tale wedding ring such as the one that will be going under the hammer on November 29th in white gold, decorated with an oval-cut sapphire and weighing 24.18 carats, set in brilliant diamonds and bearing a 4.80 carat emerald, from around 1970?
Year after year, decade after decade, such a tradition has been maintained, anticipating and imposing fashions with an incomparable ability to become the reference point for top-end Italian and international jewellery, thus assuming an ever-increasing iconic significance for the brand. An article that appeared in the December 1963 issue of Connaissance des Arts was indeed confirmation of the fact that Bulgari jewellery had by the early ‘60’s already achieved their unique and iconic status: “Un bijou Bulgari se reconnaît comme se reconnaît un tailleur Chanel…”, and we have the proof before our very eyes with an enchanting platinum ring, decorated with a rectangular sapphire set between brilliant baguette diamonds from around 1960, by Bulgari and kept within its original dark green case.
Two gold brooches decorated like roses with old-cut diamonds in green enamel, from around 1860, are reminders of the fact that such a delicate flower means both celestial perfection as well as earthly passion, time and eternity, fertility and virginity. The rose was the favourite flower of the fairy-world since it was used to bring happiness and wellbeing to people who were good people. The rose is also the symbol of the mystery of life, of beauty, of elegance and of seduction. Which other object, in such a small contained space, can offer so much beauty and pleasure?