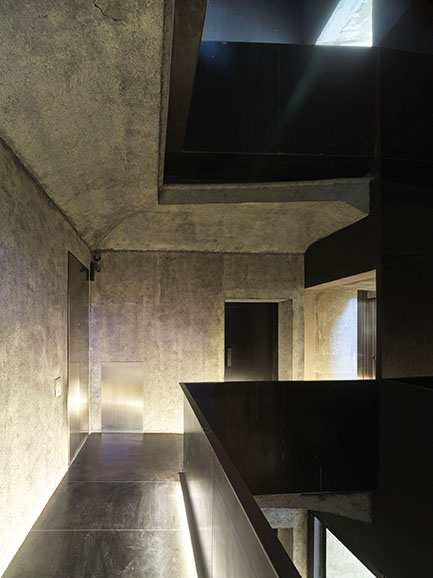 “Our Foundation will be the branch of the Hermitage in Rome”. Is it possible to have such an ambitious idea without being a museum?
The Capital of Great Beauty bets on the future and is proposed as a contemporary artistic and cultural hub.
Since 2001, Alda Fendi, after having left the family fashion house now owned by Bernard Arnault’s LVMH group, has been committed to promoting culture and contemporary art.
It is not uncommon to meet her at the Venice Biennale or in the galleries of Art Basel, looking for ideas.
Yet for the inauguration of the new headquarters of the “Fondazione Alda Fendi – Esperimenti”, a building in the heart of the Roman archaeological centre located in Velabro – an ambitious project by Jean Nouvel renamed “Rhinoceros” – she looked back in time and exhibited one of the elusive geniuses of the Italian Renaissance: Michelangelo.
On the occasion of the presentation of the new spaces, the artistic director Raffaele Curi imagined a dialogue between the Florentine genius and the French archistar. The first two floors of the steel building – with references to the past – will house, until December 13, a nucleus of 16 drawings signed by Michelangelo, depicting monuments of Florence and Rome from Casa Buonarroti in Florence. Nouvel claims: “The fragility of Michelangelo’s drawings presents itself as both personal reflections and as an essay on the birth of idea and form, a premonition of what he will show in San Pietro and in Florence”.
To close the circle, in December, the Foundation will host “The Adolescent” for three months, one of the few sculptures by Buonarroti to be kept abroad in the collections of the St. Petersburg museum, with which it has started a valuable collaboration.
The sculpture is small compared to the artist’s other works and shows a squatting boy, with defined muscles. It is very similar to the monumental works that no one would ever dream of moving. It was part of Michelangelo’s project for the Basilica of San Lorenzo in Florence.
In 1534, the artist had sculpted the marble without finishing it. Fed up with Florentine life, he moved to Rome where he had to finish “The Last Judgement” of the Sistine Chapel. Under Nouvel’s guidance, Fendi renovated a six-storey building in the archaeological area between Circus Maximum and the Mouth of Truth. Thanks to Raffaele Curi’s futuristic ideas, lighting played an important role and Vittorio and Francesca Storaro, Oscar winner for “Apocalypse Now”, “Reds” and “The Last Emperor”, took care of it. The interweaving of yellow and red light illuminates the arch of Janus, long shaded and a little forgotten next to the church of San Giorgio in Velabro. “The Arch was made in the fourth century and is one of the many little visited and semi-forgotten wonders of the city. Only few people know that a few meters from here, in the Forum Boarium, ancient rituals and sacrifices were made. This is where ancient Rome moved its first steps”. Alda Fendi explains.
The Foundation’s project is to create a multicultural and multimedia space in the historical and archaeological centre. The new headquarters located between Circus Maximus and the Mouth of Truth looks to the future thanks to the strong steel elements that are combined with the history of the building.
Alda Fendi and Raffaele Curi imagine bringing Urs Fischer’s cyclopean sculptures to Rome, perhaps just a rhinoceros that is the new symbol of the Foundation.
“The rhinoceros, a species threatened with extinction, is the very symbol of an idea of a fairer planet, which respects the ancestral side of nature”. Observed the patron. And from the new palace, it sends a strong message to the Capital: “We, Romans, must awaken from a kind of torpor: we are so surrounded by art and history that we take for granted everything we have”.
There’s still a long way to go and it takes synergy to replicate in Rome Miart, the successful Milanese model. Yet, you have to start somehow.