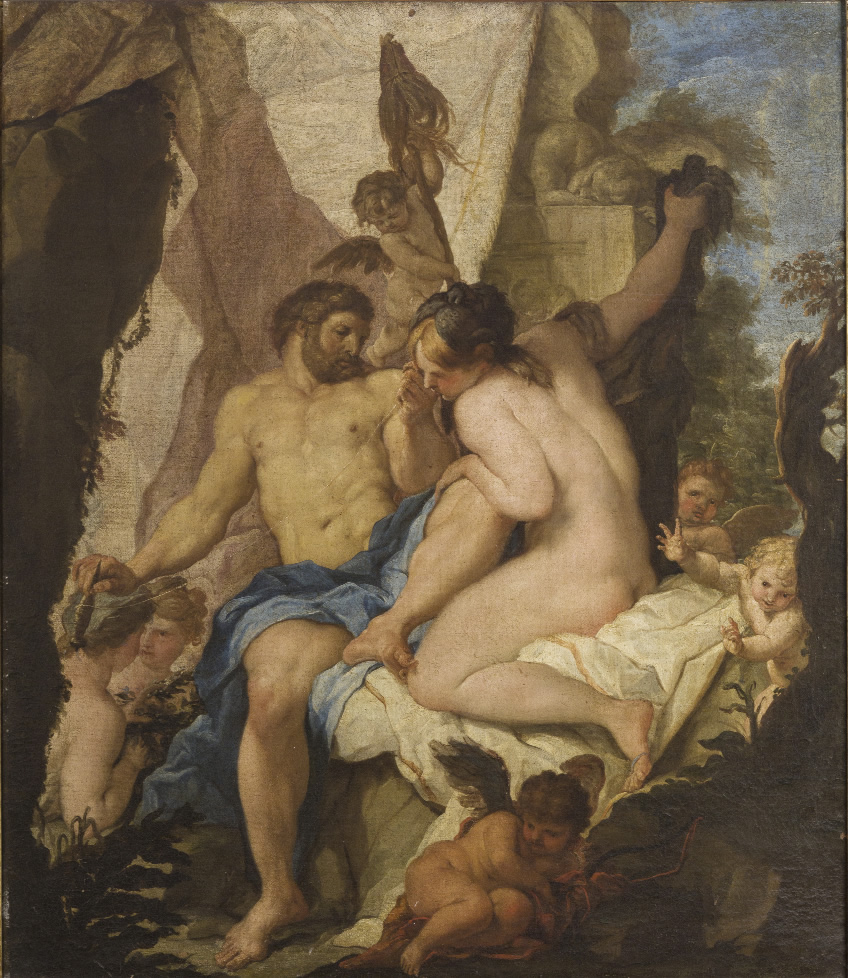 In the myth of Hercules, Omphale is the queen of Lydia, daughter of Iardanus and wife of King Tmulus. She takes over his kingdom after his death. The role of the Greek mythological hero, symbol of power and justice, is overturned once he puts himself at her service. He then wears the queen’s female clothes, spinning wool at her feet and indulging in the sensual pleasures of the flesh. This subject, which often recurs in Alexandrian and Roman literature and art, in Paolo Pagani’s painting (Castello Valsolda, 1655 – Milan, 1716) becomes a refined exercise in composition, where the exuberant anatomies of the characters exalt the ambiguity of the roles and the game of seduction, the subtle limit between pleasure and modesty.

In Ercole, Deianira e Nesso, the latter tries to kidnap the woman but the demigod kills him with an arrow poisoned by Hydra’s blood. “Collect my blood! It is a strong love potion,” whispers the centaur to the queen, but in fact it is poison. This subject exalts the power of violent passions, of deep impulses that often determine the choices of men beyond reasons.

An ideal theme for a profane subject in the late baroque season, which Rubens had also represented with junonic evidence, but which Paolo Pagani solves with soft plastic and colour sensitivity. The pair of paintings come from the Venetian collection Paolo Brugnera, and were exhibited in 1947 (as stated by a card on the back, lot 63) at the “First exhibition of ancient art in the private Venetian collections” as works by Sebastiano Ricci. Dating back to the very first years of his Venetian stay (1685 – 1690), and considered capital works of his training, by Alessandro Morandotti in particular, they are in close connection with the Guarigione del cieco (Healing of the Blind) (Turin, Savoy) and especially Semele e Giove (Semelae and Jupiter) (Brno Museum), evidence of a stylistic phase inspired by the examples of Pietro Liberi, Luca Giordano and Diamantini. The articulated and complex poses, the sensually mellow luminosity, the inclusion of glimpses of landscape and characters in the background, which give greater drama and movement to the scene, make these two canvases an exemplary testimony of Paolo Pagani’s ‘modern classical’.

That Raphaellesque style that elevates drawing to the fundamental genesis of the artistic process acquires, with the students, a refined archaeological value – as in Raphael’s Lodges of 1519. An emblematic case comes from a precious work by Prospero Fontana (Bologna 1512 – Rome 1597), which in pre and post-Tridentine Rome – between decorative intent and public painting – became a meeting point between the Bolognese taste, Parmigianino, and the Tuscan-Roman manner of Perin del Vaga and Francesco Salviati.

He studied in Rome with Perin del Vaga. Here, in the Eternal City, Polidoro Caldara da Caravaggio was a fundamental example. The work that will be presented in the next auction of Ancient Paintings is a refined quotation of the painted frieze that decorates Palazzo Milesi in Rome depicting the Myth of Niobe. In Prospero, the frieze decoration by Polidoro becomes pure elegance and refinement and it almost foreshadows all the developments of Fontainebleau school.
The eclectic baroque exuberance of Pier Francesco Mola (Coldrerio 1612 – Rome 1666) combines with dynamic syncretism impressionistic modernity, classical solemnity, dark sensibility with Guercino, Mattia Preti and Salvator Rosa, finding a synthesis between Venetian influences, the chromatic flourishing of Pietro da Cortona – who added the great Roman baroque decoration – and southern darkness. The importance of the work that will be presented in the auction is in the attention that the artist dedicated to one of his most important commissions, namely the altarpiece now placed in the first chapel on the left of the Roman basilica dedicated to Saints Ambrogio and Carlo al Corso and made at the end of the sixties.

Giuseppe Cades’s decorative taste (Rome 1750 – 1799) is sublime, but not without a sort of intellectual irony combined with an extraordinary technical grace and capable of interpreting the sensitivity of the sixteenth century in the best possible way. The work that will be in the catalogue – datable between the eighth and ninth centuries of the eighteenth century – shows a neo-sixteenth-century inspiration approached with casual and lively style.